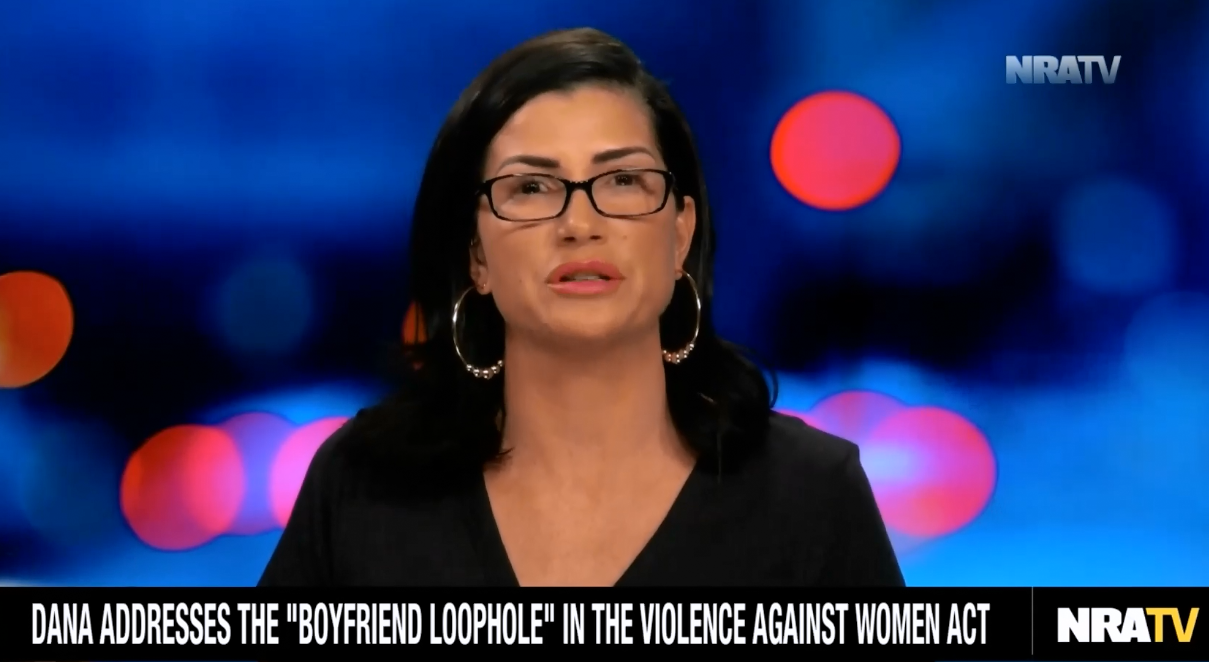 National Rifle Association spokesperson Dana Loesch used her NRATV show to attack legislation to disarm domestic abusers, falsely claiming there are no loopholes in the current law and saying that we “have to be careful” in determining “what counts as threatening.”

On April 4, the House of Representatives “overwhelmingly” voted to reauthorize the Violence Against Women Act that was originally passed in 1994 and has been reapproved about every five years since. This latest update included a provision prohibiting dating partners who have been convicted of misdemeanor abuse and individuals convicted of stalking from purchasing a firearm -- closing the so-called “boyfriend loophole.”

The NRA came out firmly against the added provision by claiming it takes away due process and reportedly warning Republican members of Congress “that their vote on the legislation will be scored and included in their NRA rating.” The NRA’s position opposing the provision isn't a new one -- the organization fought a previous attempt in the Protecting Domestic Violence and Stalking Victims Act of 2013 to close the loophole and add stalking convictions to the list of gun ownership prohibitors.

The same day that the act’s latest reauthorization passed in the House, Loesch insisted on her NRATV show that “we have to be careful about … lowering the litmus test”  to “determine what counts as threatening, what counts as violence,” and suggested that an unwelcome text message could result in the loss of the ability to purchase a firearm. While the new provision expands the categories of people who are prohibited from buying a firearm, the “litmus test” for being prohibited isn't lowered as Loesch claimed and remains a misdemeanor conviction. She went on to repeatedly claim there is “no such thing as a boyfriend loophole,” and flatly told viewers that dating partners are included in the current “intimate partner” definition. In reality, “intimate partners” convicted of misdemeanor domestic violence crimes are prohibited from owning firearms under the current law, but the term “intimate partners” does not include dating partners who have not lived together or had a child together. This limitation is commonly known as the boyfriend loophole.

The NRA spokesperson also said politicians who supported this version of the Violence Against Women Act “should be ashamed of themselves.” From the April 4 edition of NRATV’s Relentless:

DANA LOESCH (HOST): The provision that allows authorities to remove property and firearms from individuals, that can actually be expanded to include those individuals who maybe perhaps texted something to you that maybe you didn’t like or that you thought were threatening. Which would include half of the people that are in my [Twitter] mentions, including many verified journalists. So we have to be careful about when we talk about expanding certain laws and lowering the litmus test for -- to determine what counts as threatening, what counts as violence, so on and so forth.

They were also claiming that they were closing this “boyfriend loophole,” which is not an actual thing. There’s no such thing as a boyfriend loophole. The boyfriend loophole is made completely of falsehoods simply by the language of the Lautenberg Amendment, which was an amendment to the Gun Control Act passed in 1968 that specifically states “intimate partners.” What would you call a boyfriend? An intimate partner. So why are people saying that there is a boyfriend loophole? There is no loophole at all, whatsoever. A criminal act isn’t a loophole. There isn’t one in the Violence Against Women -- there isn’t one with regards to all of the legal processes and the judicial processes through which someone can be adjudicated ineligible by everything that is already included in 18 U.S.C., subsection 922(g). All of this is already there. So these individuals that have been pushing these things are doing so based on a falsehood, and they are doing it on the backs of women who have survived domestic violence situations, which I find incredibly troubling.

This was about diminishing due process, that’s what this is about. And if lawmakers want to try stunts like this, they can do it not on the backs of women who have endured and survived domestic violence, they can do it separately on their own. But what this shows you is that they know things like undermining the rule of law and undermining due process and removing it entirely, that this is not widely supported by Americans, that this is a very unpopular tactic. Which is why they had to hitch it to the Violence Against Women Act and this reauthorization. They should be ashamed of themselves for doing so.