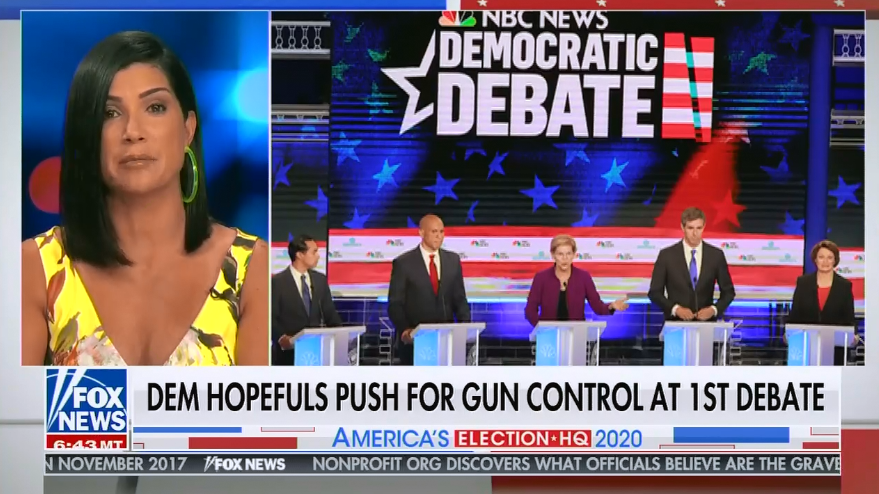 The former NRA spokesperson went on to baselessly claim a new Gallup poll shows “there are more people who think that 9/11 was an inside job” and “more people believe the moon landing was fake than actually want gun control.” The appearance just came a day after the shuttering of the NRA’s media operation, NRATV, which included Loesch losing both her NRATV show and NRA national spokesperson position. From the June 27 edition of Fox & Friends:

BRIAN KILMEADE (CO-HOST): When it comes to guns, Dana, I was surprised they weren’t saying ban all guns, which I was expecting, but there is huge pushback.

DANA LOESCH (FORMER NRA SPOKESPERSON): Well, and Brian, it’s good to talk with you, they kind of did. Whenever they talk about confiscation, whenever they mention it, it’s always mandatory buybacks. That’s like the word olympic salad, that people like Cory Booker and some of the other -- what [Eric] Swalwell, I think he’s at 1% now I guess -- that that’s the language that they use whenever they talk about confiscation, because confiscation is a nasty word. But what’s even nastier is how out of touch all of these candidates are with their own voters. There was a Gallup poll just last week, I'm sure you all saw it, that showcased the number one priority for Americans right now is illegal immigration. They think of that as a huge security issue. At the very bottom of that list, registering at just 0.5% of respondents was concerns for gun control. In fact, Gallup even rounded it up so that it would be 1%. So let me put this even -- in even more perspective for everyone. There are more people who think that 9/11 was an inside job than actually, according to the latest polling, want gun control. The Washington Post had a piece that showed more people believe the moon landing was fake than actually want gun control. These people are all fringe, these candidates.

The Gallup poll Loesch cited asked respondents what they considered to be “the most important problem facing the country today” -- not how many Americans “want gun control.” One percent of respondents said “guns/gun control” and under 0.5% said “school shootings.”