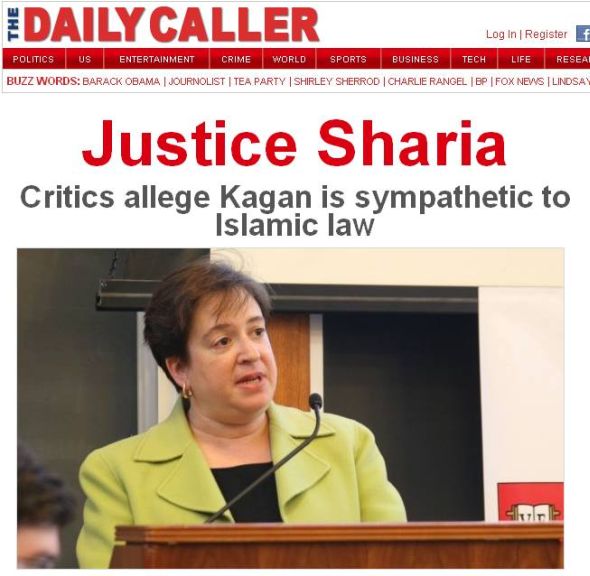 The conservative media has been circulating this claim for months now -- though to be honest, we're more accustomed to it being paired with an image of Kagan in a turban, rather than one of her standing behind a podium.

Nonetheless, it's important to again set the record straight on this tired, Islamophobic attack, especially because The Caller has chosen to revive it just as the right is whipping up an anti-Muslim frenzy regarding the community center and mosque set to be built near Ground Zero.

The Caller reports that, according to some conservative critics (more about this merry band later), one of Kagan's “primary disqualifications” is the supposed “approval of Sharia” she demonstrated as the dean of Harvard Law School. The familiar laundry list of Kagan's alleged offenses includes “condoning the acceptance of $20 million from Saudi prince Alwaleed bin Talal -- who blamed the attacks of 9/11 on American foreign policy -- to fund programs on Islam,” “spearhead[ing] the 'Islamic Finance Project,' a program aimed at mainstreaming Sharia-compliant finance in America,” and “award[ing] the Harvard Medal of Freedom to the chief justice of the Supreme Court of Pakistan, Iftikhar Chaudhry, who critics say is a promoter of Sharia.”

None of these attacks is remotely accurate.

First, let's make clear the facts surrounding Prince Alwaleed's 2005 gift to Harvard University, which established a university-wide Islamic Studies Program and offers courses such as “Religion in Global Politics,” “Early Iranian Civilizations,” and “Christianity Along The Silk Road.” As The Boston Globe reported at the time, the prince said of his gift, “I hope that this program will enable generations of students and scholars to gain a thorough understanding of Islam and its role both in the past and in today's world. Bridging the understanding between East and West is important for peace and tolerance.”

The Globe went on to note that Harvard had recently rejected a gift from a donor it believed was tied to “anti-American and anti-Jewish” sentiment, and that Alwaleed “is widely known for his pro- American views and for his major investments in the United States.” From The Globe article:

After the Sept. 11, 2001, terrorist attacks on New York and Washington, in which 15 of the 19 attackers were Saudis, Alwaleed tried to donate $10 million to the Twin Towers Fund for victims. Former New York City mayor Rudolph W. Giuliani rejected the gift because of an accompanying press release in which Alwaleed urged the United States to reexamine its Middle East policies “and adopt a more balanced stance toward the Palestinian cause.”

Gifts to Harvard from wealthy Arabs also have been controversial in the post-9/11 environment.

Donations during the 1990s to the schools of law and design from relatives of Osama bin Laden were criticized after 9/11. But the money had no known ties to bin Laden or terrorism, and Harvard kept the gifts. Last year, Harvard Divinity School returned a $2.5 million gift from the president of the United Arab Emirates because of the president's ties to an Arab League think tank with alleged anti- American and anti-Jewish leanings.

But problems with the Alwaleed donation do not seem probable. The prince, who is a nephew of Saudi King Abdullah, is widely known for his pro- American views and for his major investments in the United States.

The Caller doesn't provide any evidence of extremism or discrimination resulting from Harvard's Islamic Studies Program, and conveniently forgets to mention that Alwaleed's Kingdom Holdings, according to the Financial Times, is the largest shareholder of Fox News' parent company, News Corp., “outside the Murdoch family.” That's right, that's the same Fox News that featured Daily Caller editor and “Fox News contributor” Tucker Carlson on Hannity just a few weeks ago.

The conservative claims of supposed radicalism behind Harvard's Islamic Finance Project and Medal of Freedom award to Pakistani Justice Iftikhar Chaudhry are just as flimsy. As we've noted, in 2002, the Bush Treasury Department hosted an “Islamic Finance 101 Seminar,” which was the “result of a collaborative effort between the Treasury Department and the Harvard Islamic Finance Information Program.” In his introductory remarks to the 2002 seminar, Treasury Undersecretary John B. Taylor said, “I've observed that the economic principles of Islamic finance and conventional finance are the same,” and two years later, the Bush Treasury department launched its “Islamic Finance Scholar-in-Residence Program.”

The 2007 decision to award Pakistani Justice Iftikhar Chaudhry Harvard Law School's Medal of Freedom is similarly non-controversial -- as we've documented, the award recognized Chaudhry for his efforts to uphold the rule of law in Pakistan following a military crackdown. Even the conservative Washington Times condemned General Pervez Musharraf for choosing to fire Chaudhry.

And who are the conservative critics The Caller cites for these nonsense attacks? Birther Frank Gaffney, who has claimed, “There is mounting evidence that the president ... actually may still be [a Muslim] himself,” Andrew McCarthy, who recently published a book that invokes numerous smears, myths, and falsehoods to portray Obama as an “Islamist,” and Robert Spencer, who has smeared Obama appointee Rashad Hussain as a pro-jihad terrorist sympathizer.