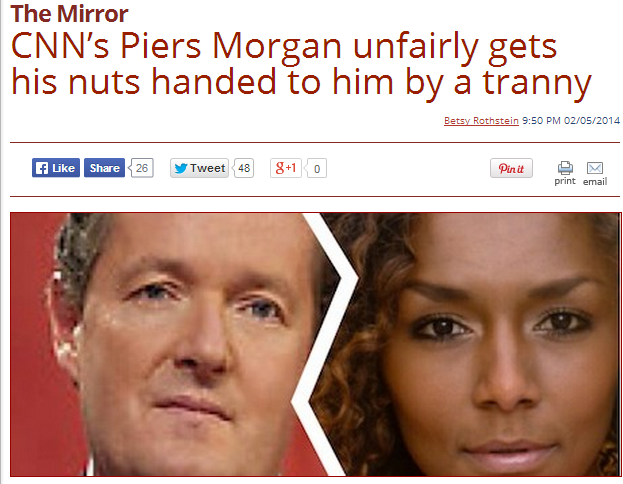 Daily Caller gossip scribe Betsy Rothstein used the transphobic slur “tranny” to describe transgender activist Janet Mock, defending Piers Morgan against charges that his February 4 interview with Mock sensationalized Mock's story and stating Mock's new memoir wouldn't “even exist if she had not been born with a penis.”

In a February 5 column titled “CNN's Piers Morgan unfairly gets his nuts handed to him by a tranny,” Rothstein blasted critics who denounced Morgan for fixating on the physical and sexual aspects of Mock's gender identity during a February 4 interview on his show. Rothstein said the controversy was much ado about nothing, even as the title of her column contained a notorious anti-transgender slur (emphasis added):

The reason for his bad day centered around Janet Mock, a transgender woman he'd had as a guest on his program to discuss her new book Redefining Realness: My Path to Womanhood, Identity, Love & So Much More. That's right, he was helping her sell her book. But that wasn't enough for Mock. She really wants to sell her book. So a week after the interview was taped, she incited people in the transgender community, who accused Morgan of being “transphobic” and mistreating her by explaining that she was male before age 18. The fact is, Mock was born a boy with the name “Charles” and had a sex change at 18. Her beef is that she “identified” as a woman her whole life. And yet, she still had a penis. During the interview, Piers told her that her dress was something Beyoncé would wear. Mock replied, “Well, I live for Beyoncé. So that's a very good compliment. Thank you.”  Piers complimented Mock repeatedly throughout the segment, calling her “brave” and “gutsy” and a “remarkable lady.” Instead of being treated like a zoo animal who is fed his part, Morgan asked questions he thought viewers would wonder about. For example, asking his audience how they might feel if they learned a woman they were dating was once a dude? Hardly an outlandish question to ask in reference to a transgender woman who is selling a book about her life experiences. But that was not in Mock's talking points. She wanted Piers to normalize her experience and speak to her as if she wasn't selling her book based on the fact that she is a transgender. Would the book even exist had she not been born with a penis? OF COURSE NOT. If we wanted a sanitized, publicist's version of an interview, fine. But that wasn't the case, nor should it have been.

Tonight, Piers had Mock back on his program in a live interview. He asked why he has had to endure 24 hours of abuse from the transgender community.

Rothstein's apparent belief that Mock couldn't possibly have truly identified as a woman until she underwent a surgical sex change reflects the very sort of “reductive thinking about gender” Mock decried in a February 4 interview with BuzzFeed's Chris Geidner. But Rothstein's focus on Mock's genitalia is standard fare at the rabidly transphobic Daily Caller, where even transgender high school students are considered fair game for journalistic ridicule.

Morgan - who continued to complain about Mock and his critics in a follow-up interview with her on February 5 - tweeted Rothstein's article, calling it an “interesting take” :

Morgan later deleted the tweet, explaining that he hadn't read the headline - although he didn't disavow the content of Rothstein's column: 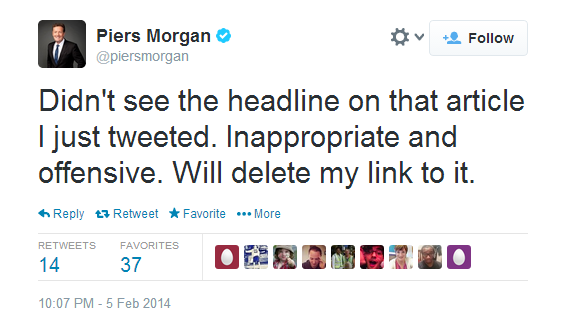