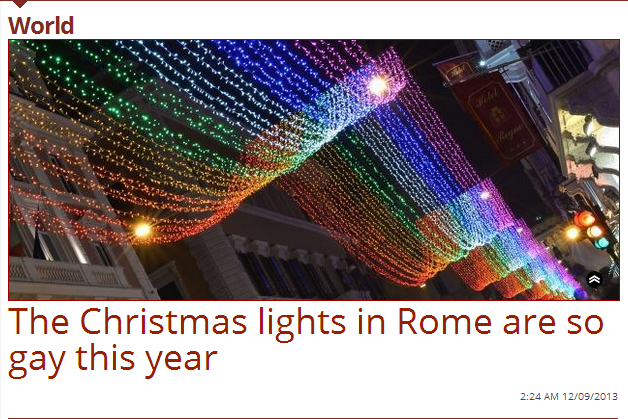 The Daily Caller mocked a rainbow flag-themed Christmas light display in Rome as “so gay.” Rome's government opted to hang the lights on the city's main shopping street to combat homophobia after the recent high-profile suicide of a bullied gay teen in the city.

In a December 9 article, Daily Caller education editor Eric Owens reported on the display, calling it a departure from the “unexciting and noncontroversial monochrome white” lights hung along Via del Corso last year. Owens explained that this year's display was a response to the “alleged bullying” of a 14-year-old gay teen who committed suicide:

The municipal government in Italy's capital city chose the multicolored motif for the mile-longish stretch of Via del Corso to convey its stance against homophobia, reports the Daily News.

The message is pertinent in Rome because a 14-year-old gay teenager committed suicide a few months ago in response to alleged bullying and his belief that his family would not accept his sexuality.

Last year, the famous lights over Via del Corso were an unexciting and noncontroversial monochrome white. In 2011, designers used the colors green, white and red to mark 150 years of Italian unification.

Owens - whose derisive reporting on LGBT teens has itself contributed to the problem of anti-LGBT cyberbullying - omitted evidence indicating that the late teen's bullying was more than just “alleged.” Roman police officials found homophobic text messages on the teen's phone after he left a suicide note lamenting, “I am a homosexual, no one understands my drama and I do not know how to make it acceptable to my family.”

The August suicide came mere months after another widely publicized suicide by an openly gay Roman teenager who encountered vicious homophobic bullying. For Owens, though, the Via del Corso display isn't so much an opportunity to highlight the widespread problem of anti-LGBT harassment and violence as it is another chance to snark about LGBT people and their allies.

It's unclear whether, in describing the lights as “so gay,” Owens was expressing his aesthetic distaste for the display. He has, after all, written that “foolish” and “stupid” are perfectly legitimate definitions for the word “gay.”