On November 6, Howley highlighted Senate action on the Employment Non-Discrimination Act (ENDA) to lament that gay people are no longer the “daring, transgressive” people they were back when gay sex was illegal and homosexuality was considered a mental illness.

Howley waxed nostalgic for the “outlaw” gays of yore who “pranced their corseted, high-heeled bodies around to midnight screenings of great American movies like 'The Rocky Horror Picture Show,' 'Pink Flamingoes,' and 'Mommy Dearest.'” Howley's use of such tropes prompted this Twitter exchange with Atlantic reporter Jordan Weissmann: 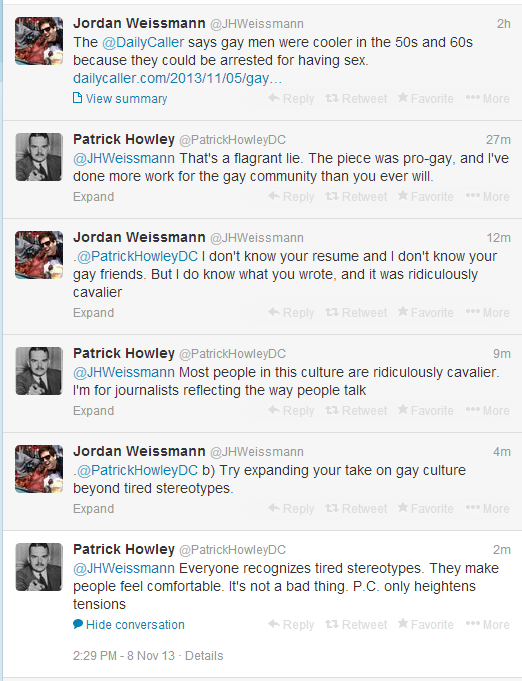 By the standards of The Daily Caller, perhaps Howley's piece was “pro-gay,” in the sense that he wasn't joining his colleagues in poking fun at bullied LGBT teens, defending Russia's crackdown on gay people, or condemning efforts to combat homophobic hate speech as  “re-education camp.”  Don't lump Howley in with that crowd - he “love[s] the gays.” He just thinks they were so much more fun before they started fighting for equal treatment.