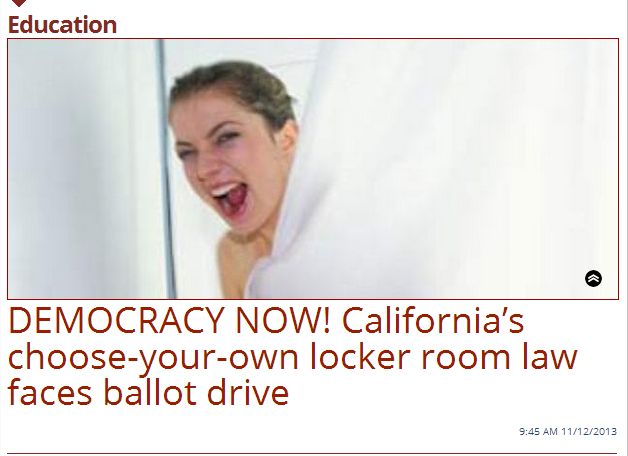 In the latest sign that it considers transgender youth acceptable targets for ridicule, The Daily Caller mocked a California law guaranteeing transgender students access to proper facilities and programs as a “choose-your-own bathroom law” designed to placate confused students.

On November 12, The Daily Caller published an article by education editor Eric Owens, who noted that the right-wing coalition fighting to repeal the law recently announced that it had gathered enough signatures to put the law up to a vote in November 2014. Owens made clear where he stood on the law (emphasis added):

Supporters of the choose-your-own bathroom law insist that allowing students to use bathrooms and locker rooms that don't match their genitalia is a vital civil rights issue. They also say it's necessary to prevent bullying.

Owens appears to have something of an obsession with transgender students' genitalia. In a September article making fun of bullied transgender homecoming queen Cassidy Lynn Campbell, Owens couldn't resist noting Campbell's  “various male appendages.”  Earlier in September, he reported that a Pennsylvania high school had disqualified transgender student Kasey Caron as a homecoming king candidate  “because [Caron] apparently still has a vagina.”

At any rate, Owens' description of the California law is characteristically off-base. School districts that have implemented similar policies state that they've seen no instances of misconduct and experienced  “nothing but positive results.”  The only reported instance of bathroom harassment was actually fabricated by the anti-LGBT Pacific Justice Institute. Claims that boys will be sneaking into girls' locker rooms are based on nothing more than statements from right-wing talking heads like Fox News' Bill O'Reilly and Greg Gutfeld that they themselves would do so.

Meanwhile, Owens' insinuation that you never know how students will “feel” from one day to the next shows that he simply doesn't understand gender identity, which the American Academy of Pediatrics says is typically established by about the age of four. But who needs expert opinion when it's so much easier to make transphobic remarks?