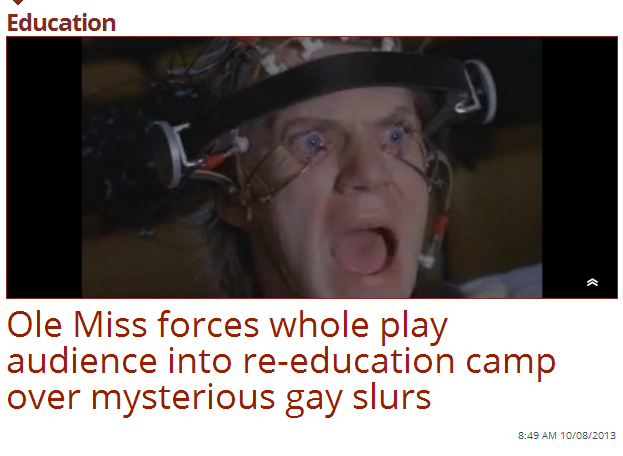 The Daily Caller dismissed as “re-education camp” a University of Mississippi forum to address anti-gay hate speech in the wake of an incident of homophobic harassment, running an image from the film A Clockwork Orange to accompany the story.

During an October 1 performance at Ole Miss of The Laramie Project, a play about Matthew Shepard's murder, a group of football players disrupted the play by shouting “fag” and other homophobic epithets. According to The Daily Mississippian, the players were attending the performance to fulfill a theater credit. In response to the incident, the pro-LGBT campus organization Allies will host an “educational dialogue session,”  which everyone present at the October 1 performance will attend.

In an October 8 article, Daily Caller education editor Eric Owens dubbed the forum a “re-education session.” Unable to determine what the big deal was, Owens lampooned the decision to hold the dialogue over audience members “voicing anti-gay slurs and laughing at the wrong times” :

The University of Mississippi will now force all students who attended a play about murdered gay student Matthew Shepard to go to a re-education session because a few unidentified audience members disrupted the performance by voicing anti-gay slurs and laughing at the wrong times, reports The Commercial Appeal.

The Ole Miss administration had charged a six-person Bias Incident Response Team with determining exactly which students (or non-students) disrupted a university theater production of “The Laramie Project,” a play based on reaction to the 1998 torture and murder of Shepard, a student who attended the University of Wyoming.

The Bias Incident Response Team failed in this endeavor, concluding in a statement that “the task of identifying specific individuals who were purported to have disrupted the performance is difficult because of the dark theatre.”

Last week, reports The Appeal, a group of football players apologized for what happened. However, a number of actors apparently believed that the players “didn't realize what it was that they were apologizing for.”

For The Daily Caller, Owens was a natural choice to tackle the story. He's the website's go-to apologist for anti-LGBT bullies, having mocked transgender high school students “running for homecoming king, queen, whatever," dismissing transgender students' fight for appropriate bathroom access as a demand for  “special treatment,”  and poking fun at a bullied transgender student's video about facing transphobic bullying as an “interminable”   “YouTube meltdown.”

Given his own apparent cyber-bully tendencies, it's hardly surprising that Owens sympathizes more with the students being “forced” to attend a discussion on bigotry than with the vulnerable populations that suffer its consequences.