Fox News Radio's Todd Starnes, one of the most prominent homophobes in right-wing media, will now also enjoy a platform at The Daily Caller, where he has just been hired as a weekly columnist: 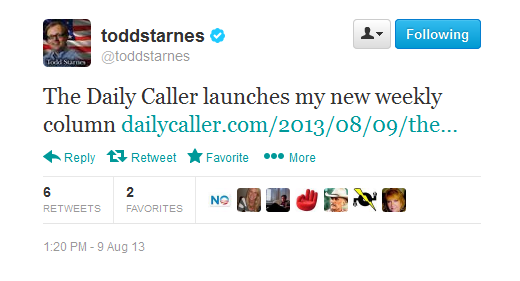 Starnes, a notorious race-baiter, devoted his first column to parroting the right-wing line that a recent Florida bus beating proves that black racism is as great a problem as white racism.

If history is any guide, Starnes will also provide Daily Caller readers with a steady stream of anti-LGBT commentary.

GLAAD recently compiled an extensive list of Starnes's greatest anti-LGBT hits. He has suggested that the military's zero-tolerance policy for anti-gay hate speech portends  “the end of days,”  mocked a transgender woman as a  “burly man wearing a dress,”  blasted schools' efforts to crack down on anti-LGBT bullying, and cultivated ties to anti-gay hate groups like the Family Research Council (FRC) and the American Family Association (AFA).

On the topic of marriage equality, Starnes gets downright apoplectic. After the Supreme Court struck down the Defense of Marriage Act (DOMA) in June, Starnes tweeted, “Supreme Court overrules God.” He subsequently predicted, “Won't be long before they outlaw the Bible as hate speech.” Starnes also believes that with marriage equality proceeding apace, it's only a matter of time before bestiality becomes a widespread and accepted practice. To hear Starnes tell it, in an America with marriage equality, the only thing that won't be acceptable is “traditional marriage” : 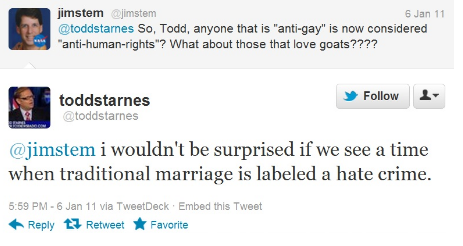 In hiring Starnes, The Daily Caller appears to be doubling down on its homophobia and transphobia. In recent weeks, its writers have defended Russia's anti-gay crackdown, clutched their pearls over the fact that a college assigned freshmen students a book with gay characters, and belittled transgender students seeking equal treatment.