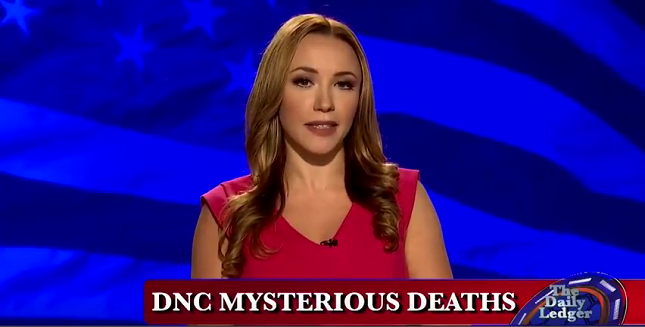 Hamill recently began working for the conservative website as a host and video columnist. She was previously a producer and on-air personality for the pro-Trump One America News Network.

The Daily Caller also employed Martina Markota, who had previously made a now-inaccessible video pushing the Pizzagate conspiracy theory (Markota has since left the site, according to her Twitter biography). Ajit Pai, chairman of the Federal Communications Commission, infamously danced with Markota and others in a Daily Caller-produced video about net neutrality in December 2017.

Hopefully he didn't leave behind another “pizza related” 🍕🍕🍤handkerchief with a “map” on it at this dinner party !! #pizzagate #wikileaks https://t.co/G37276jYWS

@johnpodesta is in a TIZZY over this @DailyCaller report- Someone should send him a PIZZA w/ Extra CHEESE to calm him down.. #PodestaRussia https://t.co/Z9Kxvg8Vun

@johnpodesta Would you care to explain this email, or is this just another
nothingburger like all your “Pizza” related emails ? #SethRich https://t.co/m4eEQlBKE9

He also probably loses sleep over Pizza and his “Hot Dog” stand in Hawaii ... @johnpodesta https://t.co/ONgp2M3aJt

She has used the hashtags “#ClintonBodyCount” and “#SethRichCoverUp” when tweeting about Rich’s murder.

This report will give you chills.. #ClintonBodyCount #SethRich #DNC #Wikileaks https://t.co/ZJ1fEiGweK

She has also referred to the “Clinton Body Count” when discussing the deaths of other people.

In June 2016, Hamill tweeted about the death of former U.N. official John Ashe:

And in July 2016, Hamill tweeted about the suicide of Republican donor Peter Smith:

Another person with dirt on the Clintons “commits suicide”.
May he rest in peace.. #PeterSmith #ClintonBodyCount https://t.co/a3LbemuXvI

In August 2016, Hamill hosted a One America News segment about “mysterious deaths with ties to the Democrat National Committee” and discussed the passings of Rich, process server Shawn Lucas, Ashe, and anti-Semitic writer Victor Thorn. Later during the segment, Hamill said: “Obviously, I don’t want to accuse the Clintons of these deaths but again this is something that needs to be investigated. But there’s a lot of people that have been tracking people that had connections to the Clintons since the ‘90s that had mysteriously died. They call it the Clinton body count.” (The original August 2016 segment appears to have been removed from YouTube but was reposted online by another account.)

In a June 2017 video, Hamill speculated about whether Podesta is connected to the murder of Seth Rich based on a “chilling ... email” he wrote about people who leak information. She also aired a viral and false graphic suggesting that the Clintons and the Democratic National Committee murdered Rich, Lucas, Ashe, and Thorn. 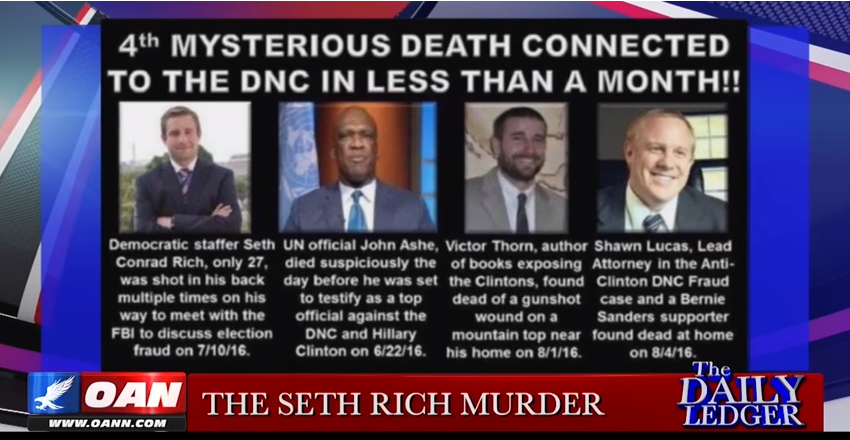 Hamill then stated: “Could you imagine if President Donald Trump’s political adversaries just started dropping dead? I think there would be some outrage. The idea of political murders happening in this great country is frightening and I hope it’s not true. But there’s just too much here to be ignored. This reminds me of the Pablo Escobar era in Colombia.”