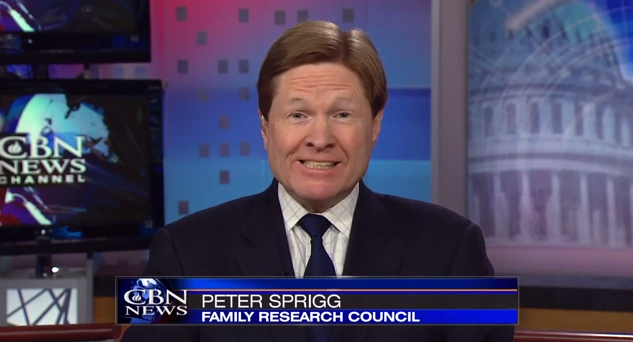 The Daily Caller provided a hate group spokesman a platform to smear marriage equality and same-sex families, part of the conservative website's pattern of promoting the commentary of some of the most extreme anti-LGBT figures in the country.

In a May 5 column, Senior Fellow for Policy Studies Peter Sprigg of the Family Research Council (FRC), an anti-gay hate group, touted Irreplaceable, a new Focus on the Family film celebrating straights-only marriage. Sprigg lauded the film for its support of “God's design for marriage.” If society were to “devalue” marriage, he argued, it would “devalue being a parent,” and thereby “devalue children”:

If you devalue marriage, you devalue being a parent - or more specifically, being a mother or a father, since the importance of gender roles (“not deterministic, but dynamic”) is emphasized.

If you devalue parents, then you devalue children. Jonathan Last, author of What to Expect When No One's Expecting, says that the sexual revolution dismembered the “iron triangle” of marriage, sex, and baby-making, and the resulting indifference in the West to creating the next generation constitutes a form of “civilizational sickness.”

His column is relatively tame in the context of his career of fear mongering about gay people, including baselessly peddling the claim that gay men are sexual predators who prey on children.

Meanwhile, Sprigg's stances on other LGBT issues are no less offensive. He sits on the board PFOX, a group promoting discredited “ex-gay” therapy, and has asserted that the proper response to gay teen suicides is to encourage gay youth to change their sexual orientations. In remarks that he later walked back following fierce criticism, Sprigg said he “would much prefer to export homosexuals from the United States than to import them into the United States.” Sprigg is no friend of the transgender community either, having declared contrary to expert consensus that trans people suffer from “delusions.”

The Daily Caller has also published numerous pieces from National Organization for Marriage (NOM) President Brian Brown, who condemns homosexuality as “deceitful, harmful, and degrading to the human soul,” and American Values President Gary Bauer, who in addition to campaigning against marriage equality in the U.S. has used his Daily Caller column space to inveigh against critics of Russia's anti-gay laws.

While Sprigg, Perkins, Ruse, Brown, and Bauer have only written for the Daily Caller's opinion section, anti-gay talking points have also found their way into the website's purportedly straight news reporting.