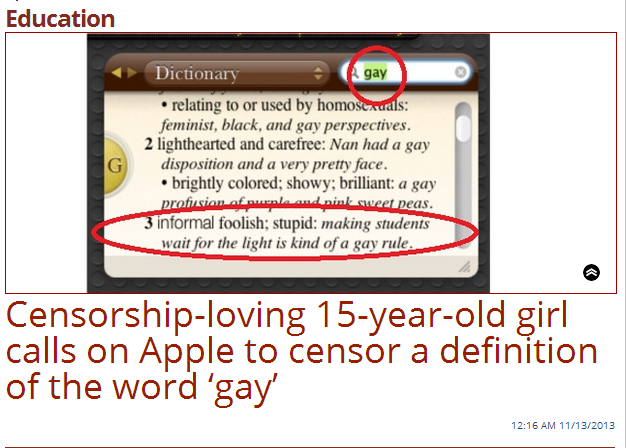 In the latest sign that it's the go-to news outlet for anti-LGBT bullies, The Daily Caller published an article lashing out at a Massachusetts high school student for objecting to the inclusion of a derogatory definition of “gay” in Apple's Macbook Pro dictionary.

A November 13 article by Daily Caller education editor Eric Owens reported that 15-year-old Becca Gorman wrote a letter of protest to pro-equality Apple CEO Tim Cook after finding that Macbook included a definition of “gay” as “foolish” or “stupid.” Gorman, the daughter of lesbian parents, was conducting research for an essay on gay rights. Owens went after the “dictionary-repressing,” “censorship loving” teen, baffled that she just couldn't understand that that's what gay means:

A Boston-area high school student is very angry that the dictionary in her Apple Macbook Pro laptop has not suppressed the knowledge that the word “gay” can be used to mean “foolish” or “stupid.”

Gorman demanded that Apple change its dictionary, and also sought an apology “to the gay community, a good amount [sic] of your customers.”

The incensed student said she got a very rapid response from someone at Apple.

“They said that Apple streams its dictionary from four separate sources so they'd have to figure out how to get it removed, but they were also really surprised,” Gorman told WFXT.

It's not clear if Apple has censored or scrubbed the offending meaning of “gay” yet.

Gorman, who swears she is committed to seeing her dictionary-repressing crusade through to the bitter end, said she would accept an addition to the definition that offends her, noting that the meaning is pejorative.

Owens has certainly made a name for himself as one of The Daily Caller's biggest practitioners of anti-LGBT cyberbullying, but he hardly stands alone at the website. The Daily Caller has repeatedly published defenses of Russia's anti-gay crackdown, ran a column by a white, non-disabled man claiming to be a black, female “cripple”  to criticize California's law guaranteeing access to appropriate facilities for transgender students, and published a column complaining about how boring gay people have become since laws banning gay sex were stricken down and LGBT people won some basic legal rights.