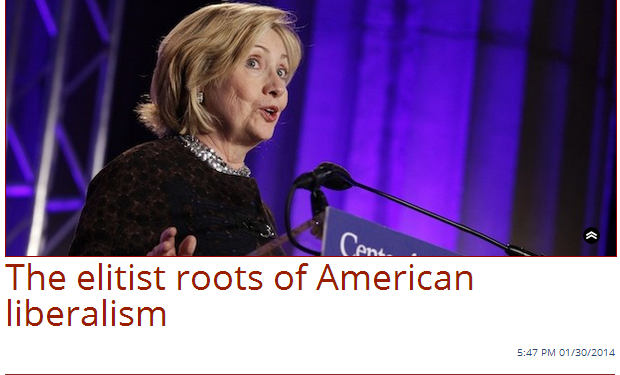 A Daily Caller writer penned an historically illiterate column proclaiming that the mission of American liberalism has always been “controlling the masses,” asserting that contemporary liberals wish to engineer a world in which “we can just eradicate that last opponent of gay marriage” and “Americans are all Rachel Maddows.”

In his January 30 column, Mark Judge embarked on a lengthy, error-ridden history of American liberalism featuring claims that arch-libertarian and bitter New Deal opponent H. L. Mencken was actually a liberal and that FDR's administration was riddled with communists  --  a conspiracy theory that has been derided even by right-wing commentators. Judge then trained his sights on contemporary liberals (emphasis added):

With the arrival of Ronald Reagan, and the subsequent Tea Party movements, American liberals, argues Siegel, have gone back to 1920s mode, but with a twist. Like Mencken, Bourne, Upton Sinclair, and George Bernard Shaw, today's left is obsessed with containing and controlling the masses and forcing them to be ruled by their betters. It's why there is such rage at the Tea Party, no to mention the Little Sisters of the Poor, who dare to resist the sexual revolution and Obama's contraception mandate. Yet there is a twist: these same liberals now love popular culture, especially the parts of it that tweak (or twerk) bourgeois values. They have also, as [author Fred] Siegel notes, traded in their concept of a “universal consciousness” that needs to be elevated for the racial and gender identity politics of “gentry liberalism.” It's not a hive mind that needs to be dragged into enlightenment; it's a bunch of dumb rednecks who need to be forced to celebrate “diversity.” In either case, the goal is heaven on earth, and they will do anything to attain it.

Let me try and sum up by putting it this way: combine utopianism, snark, arrogance, selective defense of science -- that is, defense of science when it agrees with your preformed prejudices -- hostility to Western civilization, ignorance of American history, mockery of classical culture, the ability to shift sides to either defend or excoriate the masses depending on whether the people are for or against your unreasonable utopian demands (i.e. your “rights” ), a Valley Girl singsong accent, and free-floating rage. Put it all together, have Obama recite an incantation over the stew, and you have a modern liberal. You have Rachel Maddow.

And as I said at the opening of this piece, I think Americans are all Rachel Maddows now. They willfully submit themselves to their betters, even if the best and brightest of those elites is a man with no experience and a proven record of lying. NSA wiretapping, drones, religious persecution -- no matter, we have a black president. Not to mention Miley Cyrus and Oprah. Now if we can just eradicate that last opponent of gay marriage, or outlaw the Tea Party, or unplug Fox News, we can usher in that heaven on earth that Randolph Bourne and H.G. Wells prophesied.

Depicting causes like LGBT equality as elitist is a time-worn right-wing tactic. It conveniently allows people like Judge to ignore statistics showing that due to their marginalization, LGBT people confront numerous economic challenges, from the staggering representation of LGBT youth (40 percent) among people seeking services at homeless agencies, to employment and housing discrimination.

Similarly, Judge echoes other conservatives in assailing LGBT rights as a threat to the liberty of everyone else. In this narrative, granting LGBT people the same basic rights as everyone else isn't about equality; it's a leftist plot to, as Judge put, control the masses (never mind the public's support for LGBT equality). But Judge, fierce champion of liberty that he is, wants the government to stop controlling us - just not so much that it can't deny people rights based on who they are.