A few weeks before he died, Breitbart News founder Andrew Breitbart teased his masterplan to take down President Barack Obama ahead of the 2012 election. In part, the plan relied on associating Democrats with the little known academic study of systemic racism called “critical race theory” and rendering it radical and toxic enough to damage them in the upcoming election cycle.

“This election we’re going to vet him from his college days to show you why racial division and class warfare are central to what hope and change was sold in 2008,” Breitbart declared during a speech at Conservative Political Action Conference. “The videos are going to come out.”

The most-hyped video among the ones Breitbart promised was ironically already publicly available and had been reported on during the 2008 election. It finally surfaced after Breitbart’s death in early March 2012. The footage showed a law-school era Obama who was then the president of the Harvard Law Review talking about and hugging an academic named Derrick Bell at a 1990 protest. The video was supposedly evidence of Obama embracing — literally in this case — extreme anti-white views.

As Joel Pollak, then-editor-in-chief of Breitbart News, would tell CNN’s Soledad O’Brien, “Derrick Bell is the Jeremiah Wright of academia. He passed away last year, but during his lifetime, he developed a theory called critical race theory which holds that the civil rights movement was a sham and that white supremacy is the order and it must be overthrown.”

Ultimately, the smear attempt flopped. But it marked conservative media’s first crack — led by Breitbart, Steve Bannon (who at the time was a board member of Breitbart News Network), and their employees — at poisoning the specific phrase “critical race theory” and seeding it in the wider public discourse.

This attempt may also partly explain why the current fearmongering about critical race theory spread so fast and successfully. Right-wing media and activists, as well as their peers at conservative think tanks like the Heritage Foundation and the Manhattan Institute, seem to know exactly what they are doing because they have dusted off the same playbook from 2012. And they even share some of the same funders.

Back in 2012, Breitbart and the rest of the conservative media apparatus were laser focused on painting Obama as a secret radical ahead of that year’s general election — a tactic not all that much different from what they had tried in 2008. In fact, Andrew Breitbart’s final written piece, published posthumously, connected Obama to famed leftist organizer Saul Alinsky.

Once the hug video was published, Breitbart flooded its homepage with stories about Bell and his supposed transgressions. Between March 7 and March 14, 2012, the site published dozens of video clips and articles purportedly exposing Bell, Obama, and critical race theory.

Then-Breitbart editor Ben Shapiro, a familiar face from the current discourse on critical race theory, painted Bell as a Louis Farrakhan-loving antisemite whose work Obama loved and assigned as reading in his law school classes.

On March 7, 2012, Shapiro authored a story headlined “Obama: ‘Open Up Your Hearts And Your Minds' To Racialist Prof” in which he wrote: “This is just the beginning. And this video is a smoking gun showing that Barack Obama not only associated with radicals, he was their advocate.” 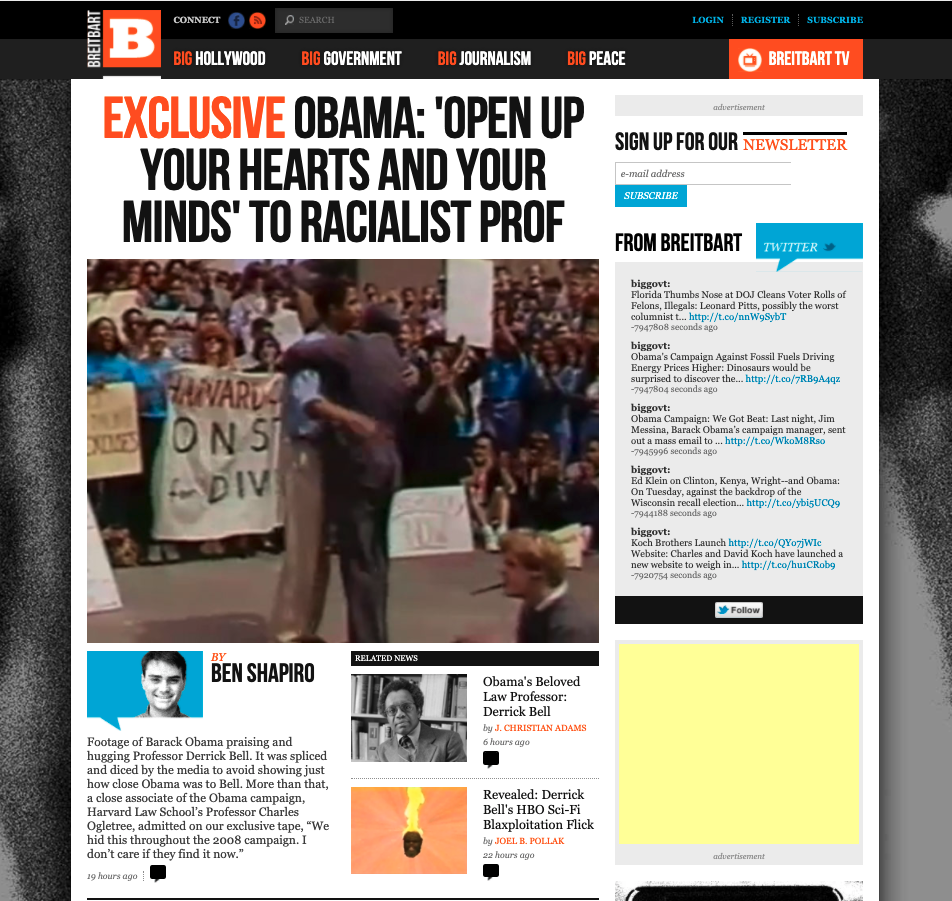 Pollak and Shapiro also appeared on Hannity on March 7 to discuss their “exclusive” scoop.

On March 11, 2012, Shapiro penned a supposed critical race theory explainer in which he claimed that Obama’s entire administration was “an ode to CRT.”

In the months that followed, Shapiro’s “CRT” motif was apparent in Breitbart’s coverage of the administration. There were suggestions that Supreme Court Justice Elena Kagan, who graduated from Harvard Law in 1986, was suddenly an ardent proponent of critical race theory, as was deputy White House counsel Cassandra Butts.

At one point, Pollak suggested that then-Attorney General Eric Holder’s infamous statement about the United States being a “nation of cowards” on race was evidence that Holder — and likely the rest of the Justice Department — were also under the spell of critical race theory.

In the end, the effort to paint the Obama administration as a bunch of secret radicals stationing critical race theorists at the head of every public institution was short-lived. Even reactionary Fox personalities like Geraldo Rivera and Bill O’Reilly panned Breitbart’s big scoop in March.

Fast forward to 2021 and right-wing circles are rabid with critical race theory outrage. Republican state legislatures are promoting legislation to curb it — even when they don’t know what it is. School board meetings are being overrun by conservative activists who are organizing online. At every level, the GOP is betting on its new boogeyman to convert “racial anxiety into political energy” ahead of the 2022 midterm elections.

And once again, Breitbart is publishing scores of articles about “critical race theory.” Some are even written by the same guy, Joel Pollak, who was pushing the same narrative back in 2012.

Ben Shapiro, now one of the most popular conservative pundits in the country, is once again helping lead the right-wing media campaign against critical race theory. But this time his megaphone is bigger, broadcasting the same talking points about critical race theory to his millions of followers on major social media platforms like Facebook and Twitter.

Per Media Matters’ internal data, Shapiro is responsible for 13 of the top 20 posts (receiving the most interactions) about critical race theory on Facebook since the 2020 election. Last month, we reported that among Facebook pages that post about politics, nearly 90% of the posts that mention critical race theory were by right-leaning pages.

There are even similarities in the dark money behind the 2012 and 2021 efforts. Robert Mercer (advised by Bannon, who became executive chairman of Breitbart after Andrew Breitbart’s death) infamously financed Andrew Breitbart's early smear campaigns. His daughter Rebekah has donated large sums of money to two think tanks that seem to be behind the newest weaponization of critical race theory. Bannon, for his part, is now predicting the current anti-“critical race theory” campaign will not only win the House of Representatives back for Republicans in 2022, but may also prove to be a right-wing presidential winner in 2024.

Nearly a decade later, Breitbart News' failed smear of critical race theory is back — and this time it appears to be working.