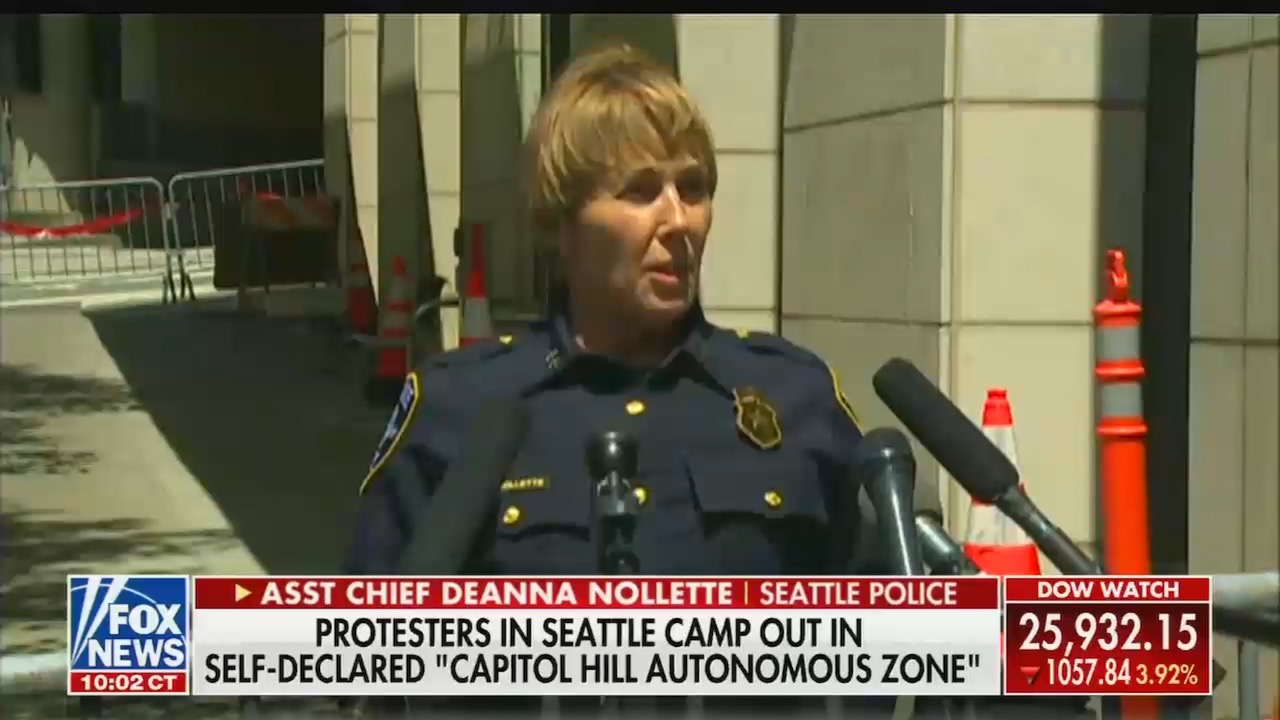 Update (6/12/2020): The Seattle Times reports that police have now walked back the report that protesters are extorting businesses. Seattle Police Chief Carmen Best said Thursday afternoon that the claim had been based on anecdotal reports from social media, but that “we haven't had any formal reports of this occurring.” In addition, local business owners say sales are strong and the protests have not hurt them.

Fox News is uncritically repeating a police allegation — and not for the first time — about alleged violent and lawless acts protesters are supposedly committing in the ongoing nationwide demonstrations against police brutality. This time, the allegation is that protesters at a key area in Seattle are demanding protection money from local businesses, even though there is no hard confirmation of this claim and there’ve been plenty of denials by local business groups.

Protesters in Seattle briefly occupied City Hall on Tuesday night, led by far-left city council member Kshama Sawant, to demand the resignation of Democratic Mayor Jenny Durkan and defunding of the police department. Protest encampments also gathered around the East Precinct police building, leading to police boarding up and abandoning the precinct, though police officials claim they are “trying to get a dialogue going so we can figure out a way to resolve this.” Currently, the building is being protected by armed protesters, who told local media that they will not create an excuse to be seen committing crimes or destroying a building in their own community.

The area has now become known as the Capitol Hill Autonomous Zone, or “CHAZ.” The Seattle Times and The Stranger both report on an atmosphere in the area that is half-protest and half-street fair — with participants unclear on what exactly they are supposed to do next. But at a Wednesday press briefing, Seattle Assistant Police Chief Deanna Nollette made the allegation about protesters demanding protection money. The Seattle Times reported:

She said police have heard from Capitol Hill community members that some protesters have set up barricades in the neighborhood – and are apparently demanding to see people’s ID, and in some instances, residents and business owners have been asked to pay a fee to operate in a roughly six-block area around the precinct.

No one has legal authority to demand ID or payment, and the latter “is the crime of extortion,” she said, adding there have also been reports of people armed with firearms attempting to intimidate protesters.

Predictably, Fox News ran hard with the story on Thursday, even though local reporters — including those at the local Fox-owned station — had already made efforts to confirm or debunk this allegation the day before, and they had found nothing there.

Later, America’s Newsroom aired a clip of Nollette making the accusation — actually replaying the video twice during the course of a roughly three-minute segment.

Fox News correspondent Dan Springer also said: “There are security guards at all six entrances [of the precinct] — and some are armed, and have reportedly been forcing businesses to pay up.”

Local news generally carried Nollette’s claim, but usually buried it in their stories among other updates, and it does not appear to be a banner story.

To be fair, all it would take to “confirm” this rumor’s legitimacy would be for a single business owner to come forward and attest that they were the victim of an attempted shakedown by any person or gang of people. But even that does not appear to have happened yet.

Seattle Times reporter Katherine Khashimova Long got an email response from an official at the Capitol Hill Business Alliance, who said she had seen the claim in a blog comment and in a “right-wing article with no attribution to the quote.”

Brandi Kruse, a journalist with the local Fox-owned station in Seattle, did a series of tweets Wednesday night:

Kruse also tweeted about one business owner who said that he had not encountered any such fee demand, nor did any of his workers — but who had also been “told that a delivery driver was turned away from the zone by gunpoint.”

A report by the local Fox station Q13Fox’s noted: “Multiple business owners told Q13 News they had not seen or heard similar events described by SPD happening during the protest.”

The Sinclair-owned local station KOMO ran a story, “Police make allegations of intimidation, extortion inside Capitol Hill's Autonomous Zone.” The 19th paragraph of the piece noted that the reporter couldn’t find any evidence in support of the claim: ”During our six-hour afternoon visit, we did not see any examples of what police are talking about, but that doesn’t mean it’s not happening.”