The news filled with aerial photos of packed beaches and interviews with spring breakers undeterred by the threat of “corona.” The state’s leader, Gov. Ron DeSantis, initially refused to issue a statewide stay-at-home order to stem what seemed like inevitable viral spread, telling reporters that such measures were a “blunt” instrument that would unnecessarily put Floridians out of work.

When a catastrophic breakout didn't instantly materialize, a clear narrative emerged on Fox News: Florida was right and New York was wrong.

Across the network, Florida became a barb to throw at Democratic governors who ordered “draconian” and “unconstitutional” stay-at-home orders -- despite ample evidence that such orders would have saved tens of thousands of American lives if they had been issued sooner.

In late April, when DeSantis announced that his state would be among the first to reopen its economy, he was a fixture on Fox. He made several appearances on Hannity’s prime-time Fox show as well as on his talk radio show. He also made appearances on Fox & Friends and The Ingraham Angle. And even as DeSantis’ claims about protecting his state’s elderly and providing reliable information looked increasingly like fiction, Fox personalities took victory laps on the governor’s behalf and chalked up any criticism of him to partisan politics and media bias.

“For weeks the media has been showering praise on Gov. Andrew Cuomo for his handling of New York's COVID crisis, but at the same time they were warning us that Florida under the leadership of Gov. Ron DeSantis was a ticking time bomb for viral spread,” said Fox host Laura Ingraham on the May 7 edition of her prime-time show. “That ticking time bomb never went off.”

But since DeSantis appeared on The Ingraham Angle that same night, Florida’s coronavirus cases have exploded. Since then, more than 2,000 Floridians have died from COVID-related illness and the state has added nearly 175,000 new cases -- nearly five times the total in early May.

Yet even as evidence began to contradict that narrative, Fox figures have stuck to the same script. 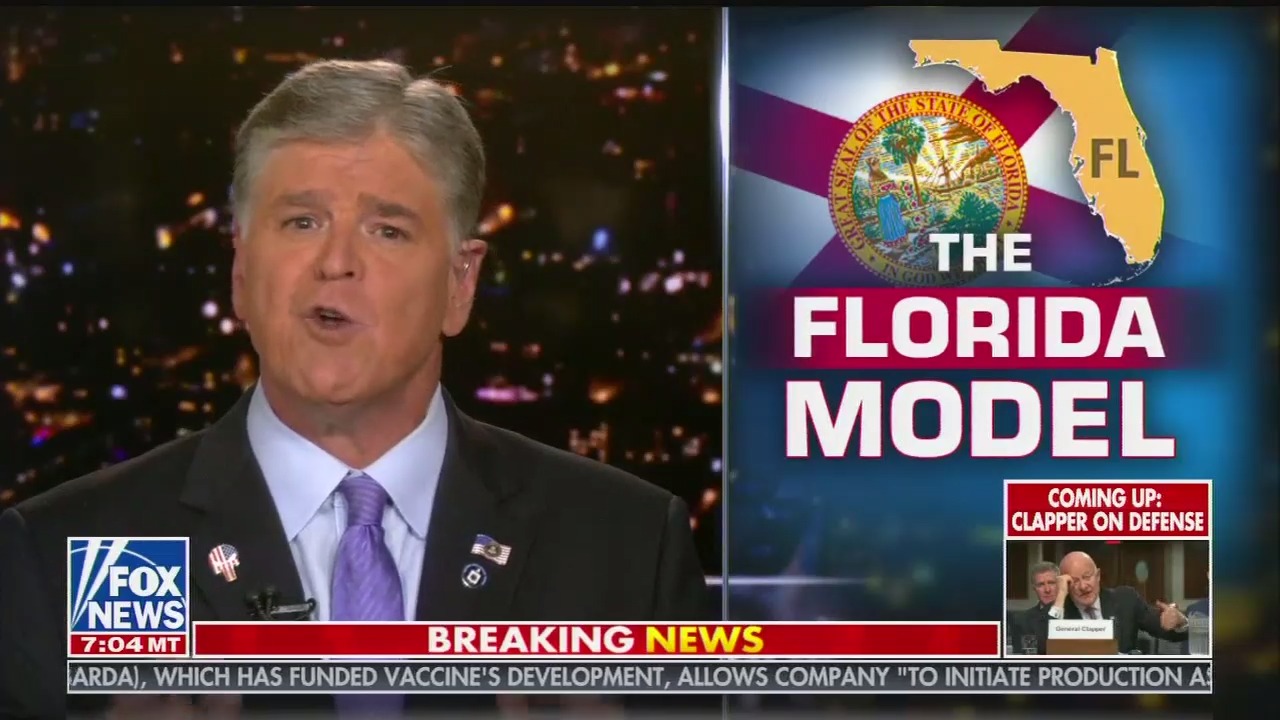 How Fox hyped the “Florida model”

On April 28, DeSantis appeared at the White House alongside President Donald Trump, touting the state’s comparatively low fatality rate and outlining how much medical equipment and testing had been diverted to hospitals and long-term care facilities.

At the time of that announcement, however, the state’s coronavirus test positivity was on the rise, which could have precluded Florida from meeting the White House guidelines for reopening, according to the Miami Herald. And the elder-care facilities that DeSantis had supposedly acted swiftly to protect were in the midst of a 600% increase in cases between April and May. Yet, despite this countervailing evidence, Fox News personalities praised DeSantis anyway.

Fox stuck to its Florida narrative despite controversy

By the time Florida had allowed its restaurants, retail shops, and other businesses to reopen on May 4, several new controversies had emerged. On April 29, the Tampa Bay Times reported the state’s medical examiners commission was ordered to stop releasing death count totals because they contradicted the state’s official data. Lawsuits from news organizations poured in as the state refused to tell the public which elder-care facilities had positive coronavirus tests. The Times also published an analysis in collaboration with a researcher from the University of South Florida which estimated that the state’s coronavirus deaths may have been undercounted by as much as 58%.

But Fox hosts and guests continued to praise DeSantis, taking victory laps on his behalf for supposedly halting the crisis without mandatory-mask or restrictive stay-at-home orders, despite evidence that such measures save lives.

Fox News spun the firing of a state data scientist

On May 18, the Florida Department of Health fired Rebekah Jones, a data analyst who helped create the state’s much-applauded coronavirus data portal. After leaving her post, Jones claimed that she had been pressured by officials at the Florida Department of Health to manually edit coronavirus testing data to show that more counties met the state’s reopening criteria. A few days later, during a visit to Walt Disney World with Vice President Mike Pence to discuss tourism, DeSantis lashed out at reporters when asked about Jones’ firing.

“Our data is available, our data is transparent. In fact, [White House coronavirus task force member Dr. Deborah] Birx has talked multiple times about how Florida has the absolute best data,” DeSantis said. He added that “any insinuation otherwise is just typical partisan narrative trying to be spun.”

DeSantis’ confrontational moment circulated on Fox, but it was presented with almost no context.

On Fox & Friends June 4, co-hosts Ainsley Earhardt, Steve Doocy, and Brian Kilmeade interviewed DeSantis about his state’s next phase of reopening which was set to begin the next day. Near the end of the softball interview, Earhardt asked DeSantis to outline why his state was quickly reopening while others were not.

“Some of the other states, I think it’s been a little more about politics from what I can tell,” DeSantis answered, before taking a victory lap. “I mean, clearly from a health perspective, Florida has done better per capita than some of these other states.”

Meanwhile, public health experts and newspaper editorial boards had begged DeSantis to slow down the reopening, but he has pushed ahead. The results have been devastating. Since the second phase of reopening on June 5, Florida has recorded  more than 150,000 new positive coronavirus tests. That's more than four times the amount recorded during the first two months of the crisis.

Instead of admitting the state had moved to reopen too quickly, DeSantis blamed “overwhelmingly Hispanic” farm and construction workers, young people, and increased testing for the steep rise in positive cases -- though he later pivoted, admitting that testing didn’t fully explain the massive growth in cases.

As pressure has mounted for DeSantis to do something about the case spike, he’s signaled that Florida has no intention of rolling back its reopening -- though the state has suspended bars from serving alcohol in hopes of discouraging young people from going out drinking and spreading the disease. As of now, the state will stick to its Phase 2 reopening.

“We never anticipated doing anything different in terms of the next phase, at this point, anyways,” the governor told reporters when asked about the record-setting rate at which the state was confirming new COVID-19 cases. “We are where we are.” As of publishing, Florida had reported more than 210,000 total cases of COVID-19, and that number is growing faster than ever. On Saturday, July 4, the state reported more than 11,458 new cases, marking a new single-day record.