After being criticized by a transgender activist for being disrespectful toward transgender people, CNN's Piers Morgan allowed two panelists to make a series of transphobic remarks and attack the activist's character with impunity.

Morgan came under fire after a February 4 interview with transgender activist Janet Mock, who recently published her memoir, Redefining Realness. During the interview, Morgan fixated on the physical aspects of Mock's identity as a transgender woman and CNN included an on-screen description stating that Mock "[w]as a boy until age 18." Mock criticized Morgan for sensationalizing transgender people and misgendering her, prompting Morgan to lash out against her on Twitter, calling her “shameful” and a "coward."

On January 5, after a follow-up interview with Mock, Morgan invited a panel of three cisgender people to discuss the controversy. Two of the panelists -- CNN political contributor Amy Holmes and conservative commentator Ben Ferguson -- made a number of transphobic remarks and attacks on Mock's character, none of which Morgan corrected:

The panel was a trainwreck of transphobic misinformation.

None of the panelists Morgan invited on his show are transgender, nor do any of them have any expertise or background studying or dealing with transgender issues. Morgan never once corrected his guests for making transphobic comments, laughing at Mock's identity, or accusing Mock of creating a “fake controversy” to sell books, even though Mock wasn't present to defend herself.

On Twitter, Morgan refused to apologize for Ferguson and Holmes' transphobic comments: 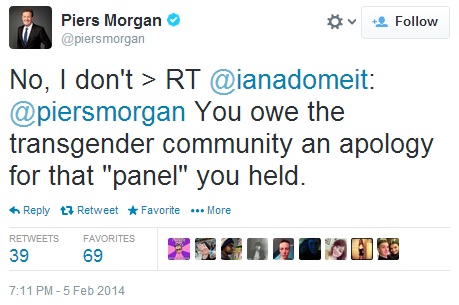 Morgan has repeatedly proclaimed himself as an ally to the LGBT community, but his willingness to sit back and let to his panelists attack and smear a transgender activist who criticized him raises serious questions about his respect for the transgender community.