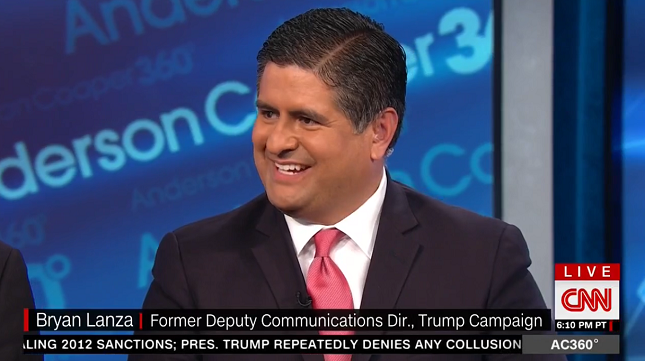 In an appearance on CNN last month, then-CNN political commentator Bryan Lanza -- who recently left the network -- criticized investigations into Russian interference in the 2016 election. During that program, there was no disclosure that Lanza had the day before started officially lobbying to help a Russian company that had just been impacted by U.S. sanctions.

CNN has hired numerous pro-Trump commentators who misinform viewers and lie about matters related to President Donald Trump. And some of those commentators also come with numerous potential and real conflicts of interest related to their off-air work.

In February 2017, the lobbying and public relations firm Mercury hired Lanza as a managing director. He previously worked as an aide for Trump’s 2016 campaign and White House transition team. CNN hired Lanza in October 2017.

CNN.com itself reported on Lanza’s lobbying in a May 12 piece (later updated on May 14) -- headlined “Former Trump campaign aide is helping Russian firm shed sanctions” -- and noted that Trump “has presided over the expansion of a new generation of influence peddlers who have used their actual or perceived proximity to the President to line their pockets.” That article originally stated that Lanza still worked for the network but was later updated to note that “Lanza is no longer a CNN contributor.”

It’s not clear why Lanza left CNN. The network did not return Media Matters’ request for comment. But Lanza’s last appearance on the network was demonstrative of the problematic nature of CNN’s stable of pro-Trump commentators.

According to individual and company documents filed with the federal government, Gregory Barker, the chairman of the board of the Russian firm En+ Group, hired Mercury for lobbying services in April. In its piece on Lanza, CNN.com wrote that the former Trump aide is helping the En+ Group shed sanctions that were imposed on it last month by the Trump administration. The contract was signed on April 5, went into effect on April 26, and was received by the government on May 4.

CNN.com additionally reported that “Lanza's involvement with EN+ Group began within the last month or so, according to a source familiar with the transaction. The source said the former Trump campaign aide is not representing [Russian oligarch and En+ Group co-owner Oleg] Deripaska himself, only the board chairman of the group attempting to free itself from the Russian oligarch's control by helping to reduce Deripaska's stake in EN+ Group from roughly 70% to below 50%. That chairman -- the former British energy minister, Lord Gregory Barker -- is listed as Mercury's client.”

On April 27, the day after Mercury’s lobbying contract went into effect, Lanza appeared on CNN’s Anderson Cooper 360 and criticized the investigations into Russian interference in the 2016 election. During one segment, he said that “this House partisan investigation ... was never going to be the one that got to the truth of anything. It became nothing but a leak factory for the Democratic Party.” During another segment, Lanza agreed with Trump's Twitter criticism of special counsel Robert Mueller’s investigation and stated that he is the “first special prosecutor” that's been "brought forward without a specific crime to investigate. So Donald Trump is right.”

CNN identified Lanza as a CNN political commentator during the program; there was no disclosure that Lanza had started lobbying to help En+ Group, though on-screen text did identify him as a managing director at Mercury.

Mercury’s Washington, D.C., office is headed by Vin Weber, whose prior lobbying activity is reportedly being scrutinized by Mueller.

Media Matters previously documented that CNN political commentator David Urban, who is the president of the American Continental Group, touted one of his lobbying clients without disclosing his financial connection.

CNN.com’s piece on former Trump aides who are now lobbying noted that Urban “works for a firm that represents a roster of top tier companies across the healthcare, telecommunications and utilities fields. Urban, who is also a CNN contributor, declined to comment.”

The cable news network previously employed Corey Lewandowski as a political commentator. The former Trump campaign manager had a clear conflict of interest: While working at CNN, he was also receiving large “severance” checks from the campaign, and he reportedly signed a nondisclosure agreement that essentially prevented him from disparaging his former boss.