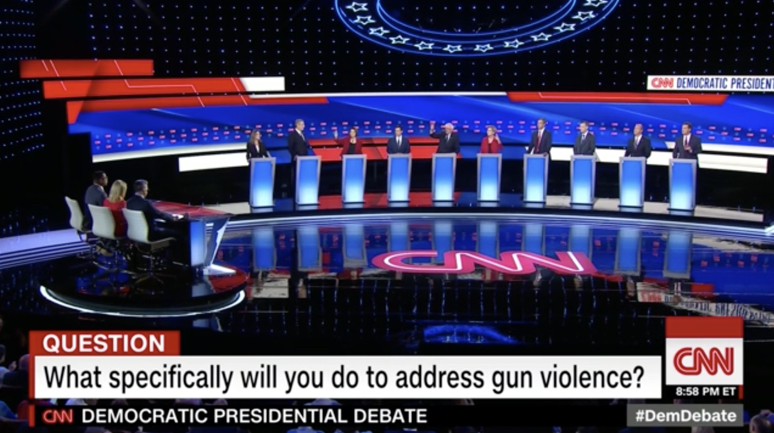 Don Lemon showed during the first night of CNN’s Democratic primary debates that moderators can ask candidates about gun violence in a straightforward manner that elicits wide-ranging answers. Lemon’s handling of the issue was in stark contrast to the sensationalist manner in which NBC’s Chuck Todd raised gun violence issues during the first round of debates. (One important note: Many other topics at the CNN debate were not covered as well as gun violence as moderators adopted right-wing frames in asking their questions.)

Gun violence was discussed for roughly 10 minutes during CNN’s July 30 debate that featured 10 Democratic presidential contenders. Lemon, who co-moderated the debates with Jake Tapper and Dana Bash, raised the issue by asking South Bend, IN, Mayor Pete Buttigieg what he would do about an “epidemic of gun violence” in the United States:

DON LEMON: Let’s turn now to the issue of gun violence. There were three large-scale shootings this past [weekend] in America, at a park in Brooklyn, on the streets [of] Philadelphia, and one that left three dead and 12 injured at a food festival in Gilroy, California. Governor - excuse me, Mayor Buttigieg, other than offering words of comfort, what’re you specially going to do to stop this epidemic of gun violence?

Todd’s question had forced candidates to use their limited response times to defend themselves from a false charge, rather than giving them an open-ended opportunity to discuss their views on addressing gun violence like Lemon’s question did. Beyond Buttigieg, six other Democratic contenders were also asked last night to share their views on preventing gun violence.

The candidates’ responses raised several important issues including what to do about everyday gun violence (which receives less attention than public mass shootings despite accounting for the bulk of the gun homicide death toll), how we are currently raising a second generation who has lived through regular school shootings, how gun violence is a public health issue, how to address the National Rifle Association’s influence on the political system, and how money in politics contributes to inaction at the federal level on gun violence. Candidates also discussed several specific gun violence prevention proposals, including implementing extreme risk protection orders, disarming domestic abusers, expanding gun background checks, banning assault weapons, and reversing restrictions on research by the Centers for Disease Control on gun violence.

Following the larger discussion of gun violence, Lemon briefly raised the issue again later in the debate, asking Sen. Elizabeth Warren (D-MA) about the fact that “the alleged shooter in this weekend’s attack in Gilroy, California referenced a well-known white supremacist book on social media.” Mainstream media have a tendency to shy away from clear discussions of ideologically motivated violence -- possibly for fear of appearing partisan because the vast majority of recent politically motivated violent attacks in the U.S. were inspired by right-wing ideology.

Prior to the July 30 debate, Media Matters interviewed a number of gun violence experts to ask them about Todd’s question at the first debate and how future gun violence debate questions might be better framed. The experts we spoke to emphasized some points that were raised at the CNN debate, including discussion of gun violence as a public health issue and everyday gun violence (which was referenced more so by the candidates than Lemon). But other issues are still yet to be explored, notably the fact that roughly two-thirds of the 36,000 annual gun deaths in the U.S. are gun suicides.

CNN’s second night of debates to be held this evening offers an opportunity to build on the largely thoughtful gun violence discussion that occurred last night.