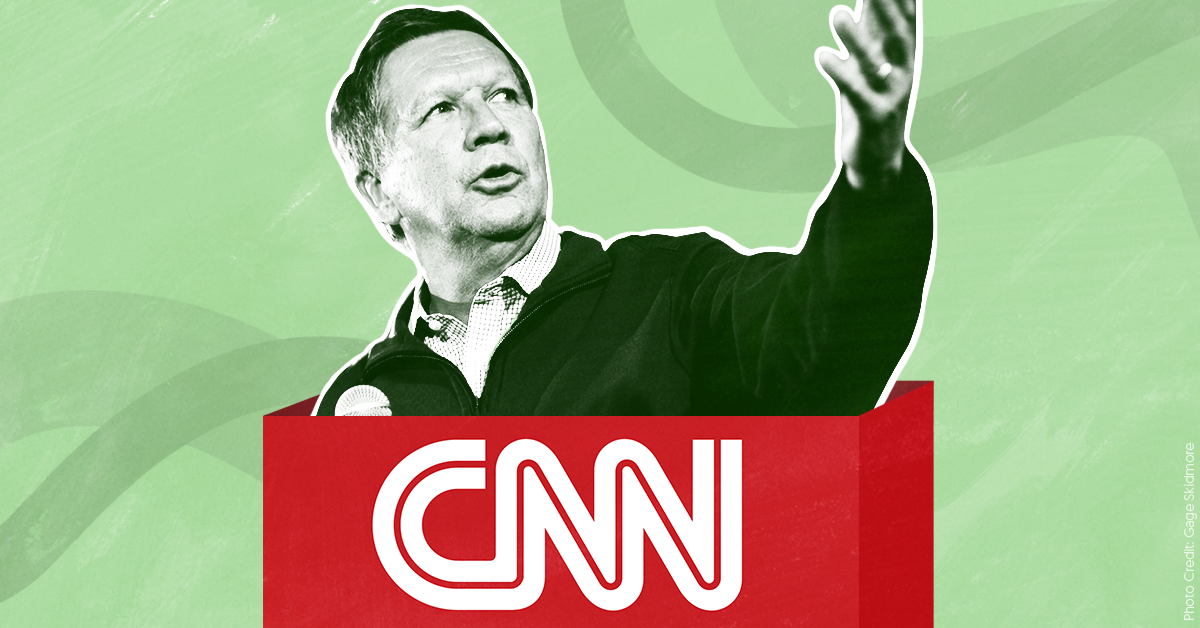 CNN has hired former Republican Ohio Gov. John Kasich as a contributor even though he is considering running for president in 2020. Kasich’s hire is the latest example of a cable news outlet unethically allowing potential office seekers to use its national platform to boost their future election chances while simultaneously drawing a paycheck. Kasich will undoubtedly use his CNN platform to draw a contrast between himself and President Donald Trump, as he did during the 2016 GOP primary. But his “carefully cultivated appearance” as a moderate is anything but accurate.

On January 15, CNBC reported that Kasich will work at CNN as a senior political contributor. Kasich’s chief political strategist, John Weaver, told CNBC that CNN “is a strong platform for the governor to continue to offer his positive vision to the country and engage on the vital issues facing America.” As CNBC’s report notes, the hire also comes as Kasich “is planning to go on a West Coast swing this week to meet with donors and business leaders, including traveling to Los Angeles and parts of Silicon Valley.” He is reportedly considering running for president as either an independent or a Republican.

Kasich previously parlayed a cable news gig into political office. After leaving Congress in 2001, he worked at Fox News between 2001 and 2009 as a host and contributor (while also working for Lehman Brothers from 2001-2008). He then successfully ran for governor of Ohio in 2010, with Fox News acting as one of his biggest cheerleaders. The phenomenon repeated itself when Fox News gave Kasich friendly coverage leading up to his announcement of a 2016 presidential run.

When Kasich announced his candidacy on July 21, 2015, he immediately received a return on his investment with Fox; during that day’s broadcast of The Five, then-host Kimberly Guilfoyle said that Kasich “does have a tremendous amount of experience and private sector in government and as governor,” while mentioning his previous employment with Fox. Fox’s Dana Perino added that “I said for a while that I think the folks are going to like him because they have for a long time,” while Geraldo Rivera proclaimed, “Kasich could do it.”

In August 2015, then-Fox News host Bill O’Reilly acknowledged that he was advising Kasich. (Kasich was previously a frequent guest host on The O’Reilly Factor, which was cancelled in 2017 following public reports about O’Reilly subjecting some of his staff members and guests to years of sexual harassment. Kasich has denied knowing about sexual harassment at Fox while he was an employee.)

Kasich has spoken candidly about the value of a cable news job in aiding political aspirations. In the lead-up to his 2016 presidential run, Kasich reportedly “endeared himself to the conservatives by mentioning his past TV work,” telling a group of conservatives: “I used to be at Fox News. I was a big star at one time.” In 2015, David Kushma of Toledo, OH, paper The Blade noted that Kasich's “tenure at Fox News, where he honed his heartland persona, helped make him media-savvy.” And a 2002 Columbus Dispatch profile noted that Kasich “wants to be in the White House,” but in the meantime was “concerned about doing a good job with Fox, developing as 'a media person' and connecting with viewers.”

Kasich’s hire by CNN is reminiscent of the revolving door between political candidacy and cable news punditry most often associated with Fox News. Media reporter Howard Kurtz noted on CNN.com in 2013 that “Fox News is the model” for the practice, citing the hire of “potential 2012 contenders like Sarah Palin, Mike Huckabee, Newt Gingrich and Rick Santorum, with the latter two jumping from Rupert Murdoch's team into the presidential primaries,” and noting, “There is no question that the high-profile platform gave them a boost.” (Kurtz left CNN and joined Fox News as a media critic later that year.)

During the 2016 primaries -- in which, in addition to Kasich, Huckabee, Santorum, and Ben Carson also ended up running for president -- CNN’s Reliable Sources show discussed the phenomenon of the “Fox News primary” in which GOP candidates courted network executives and made appearances on the network central features of their campaigns. (Although he was never a paid employee, Trump infamously boosted his profile through years of regular appearances on Fox News.)

As he considers running for president, Kasich will now have a national platform to workshop his potential appeal to voters and distinguish himself from the current Republican president. Yet Kasich has a number of ultra-conservative positions and views, such as his extreme anti-choice positions, deep-seated animus toward labor unions, opposition to same-sex marriage, and refusal to take climate change seriously.

While Kasich used media appearances during the 2016 campaign to present himself as reasonable and friendly, that hasn’t always been the case. During a 2009 guest-hosting appearance on Fox, Kasich sounded indistinguishable from Trump, ranting about “illegals” and heaping praise on then-Maricopa County Sheriff Joe Arpaio, who was later convicted of a crime for refusing to stop violating the civil rights of Latinos.