It’s no secret that CNN employs and repeatedly hosts political commentators with ties to President Donald Trump’s administration. But with the announced hire of Sarah Isgur as a political editor, the network seems set on making its intended “facts first” approach a sisyphean labor -- particularly when it comes to abortion-related coverage.

Already, conservative media dominate cable news conversations about abortion with inaccurate information. And as a career Republican strategist, Isgur not only lacks formal journalism experience -- a seeming necessity for anyone in an editorial role -- but has also spent years promoting anti-abortion misinformation.

Isgur’s installation at CNN comes at a tenuous time for abortion rights. The Supreme Court appears increasingly likely to overturn or weaken Roe v. Wade, and Trump -- after weeks of sensationalized and inaccurate Fox News coverage -- is reportedly committed to spotlighting abortion misinformation in his 2020 campaign. Anti-abortion groups and the Republican Party have similarly seized on allegations of Democratic extremism on abortion rights to rally a perceived base of support ahead of next year’s elections. Already in 2019, right-wing media have inundated audiences with a plethora of inaccurate and stigmatizing coverage about abortions and the people who have them. And some outlets outside of this echo chamber have also demonstrated an alarming proclivity for uncritically repeating Trump’s anti-abortion misinformation. If anything, Isgur’s hiring means that CNN doesn’t need to parrot Trump to spread anti-abortion misinformation anymore -- the lies can come from in-house.

Here’s a sample of the anti-abortion talking points Sarah Isgur has promoted.

Right-wing media have frequently alleged that the Democratic Party holds “extreme” views on abortion rights. Although there is little truth to this claim, Isgur has repeated the allegation on a number of occasions: 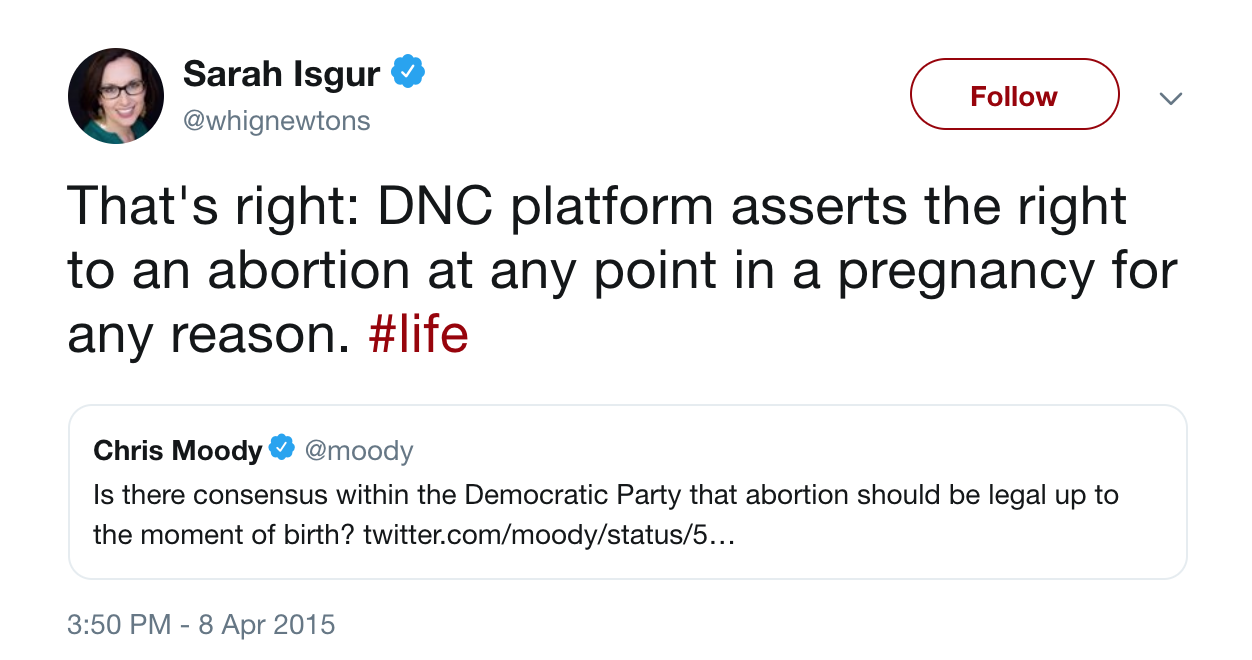 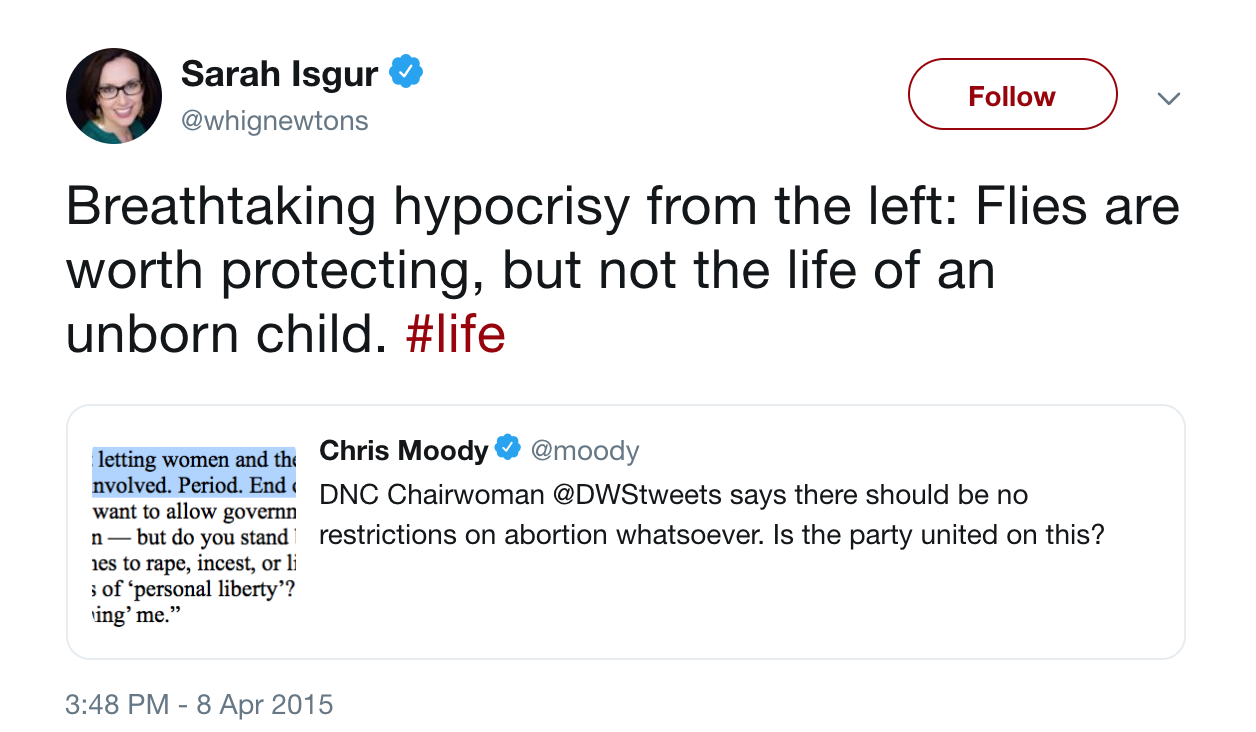 In 2015, the anti-abortion group Center for Medical Progress released a series of deceptive videos alleging wrongdoing by Planned Parenthood. Notably, then-Republican presidential candidate (and Isgur’s former boss) Carly Fiorina was among those sharing the videos and claiming they showed wrongdoing -- a position Isgur promoted: 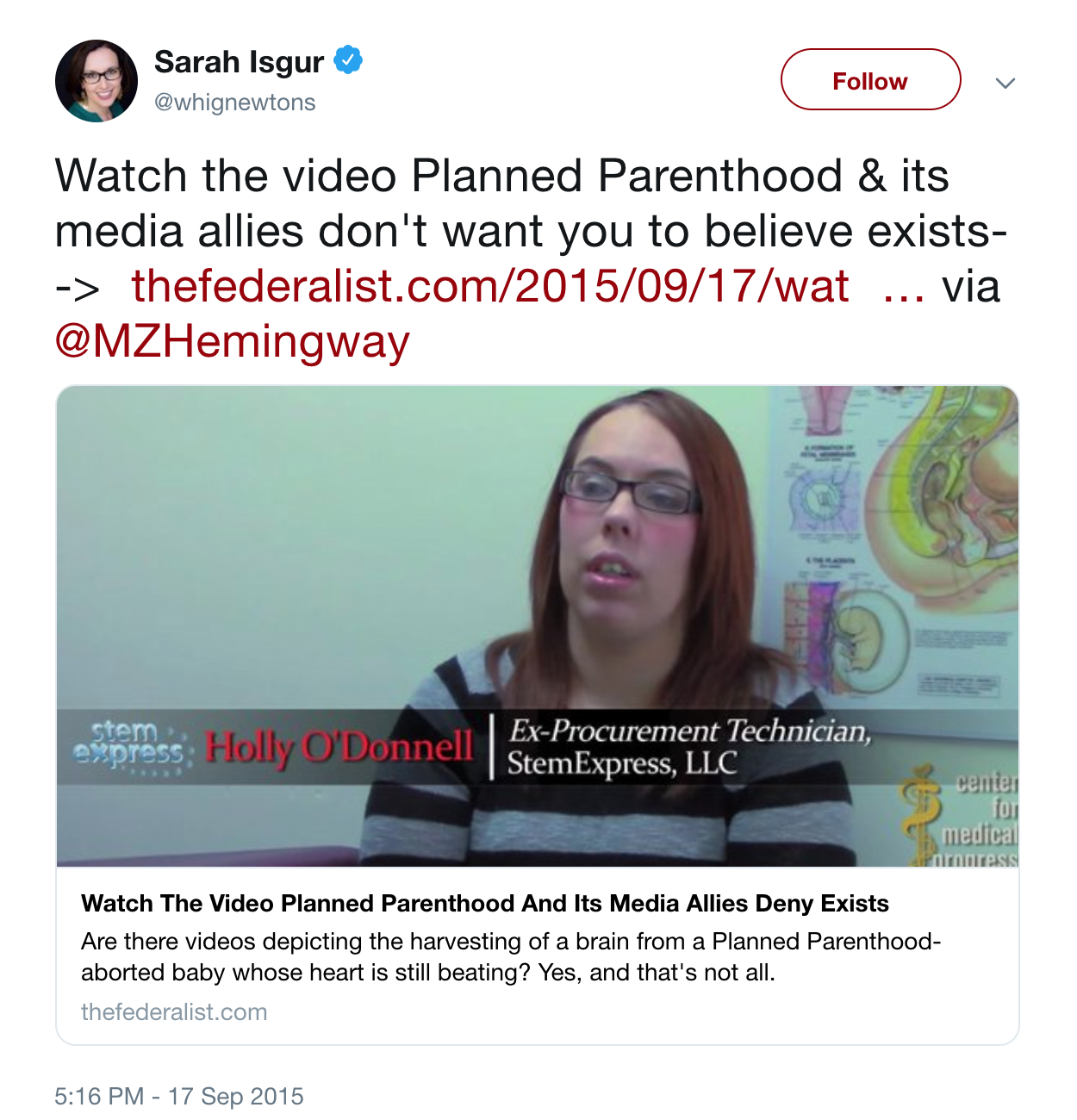 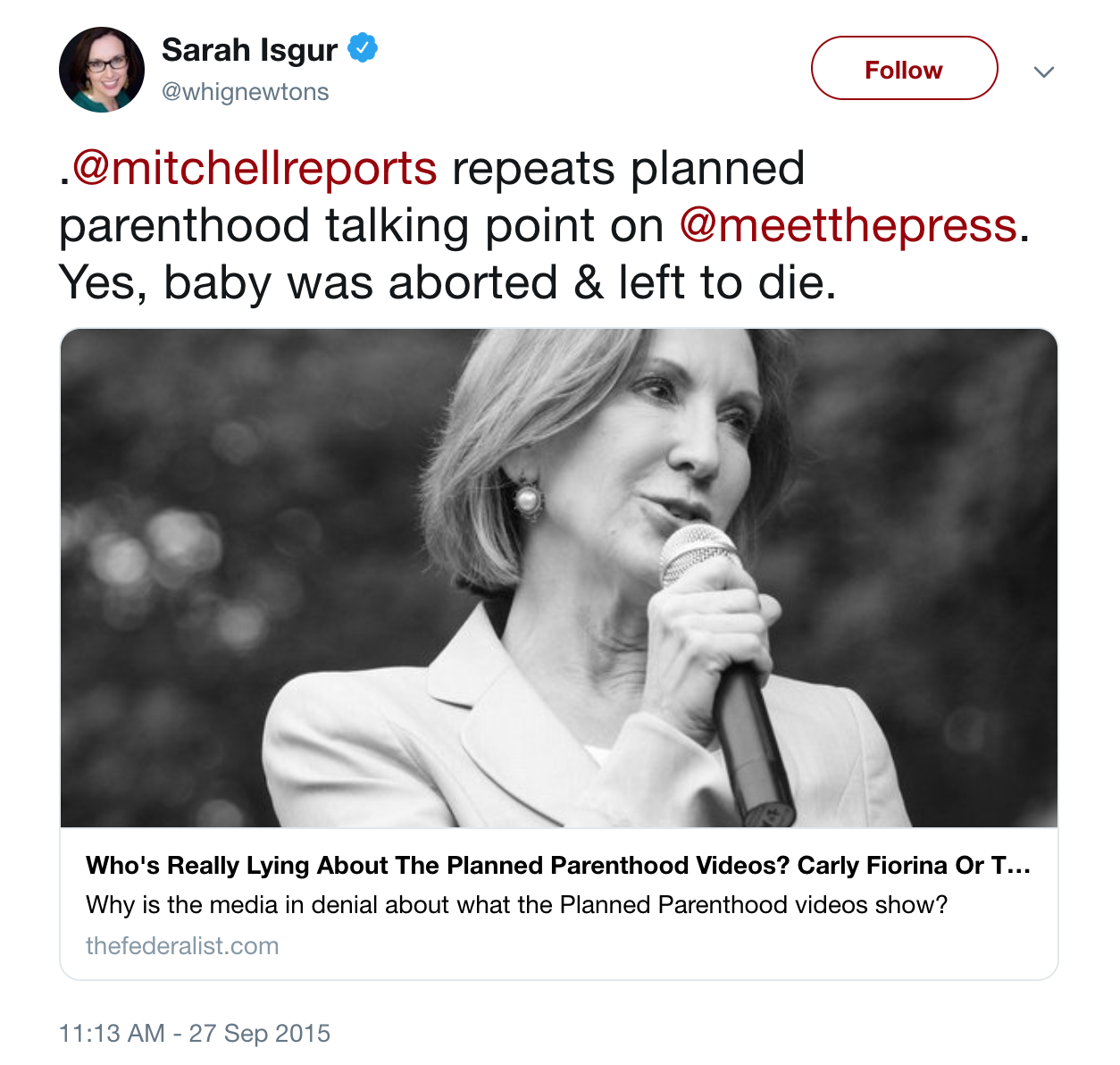 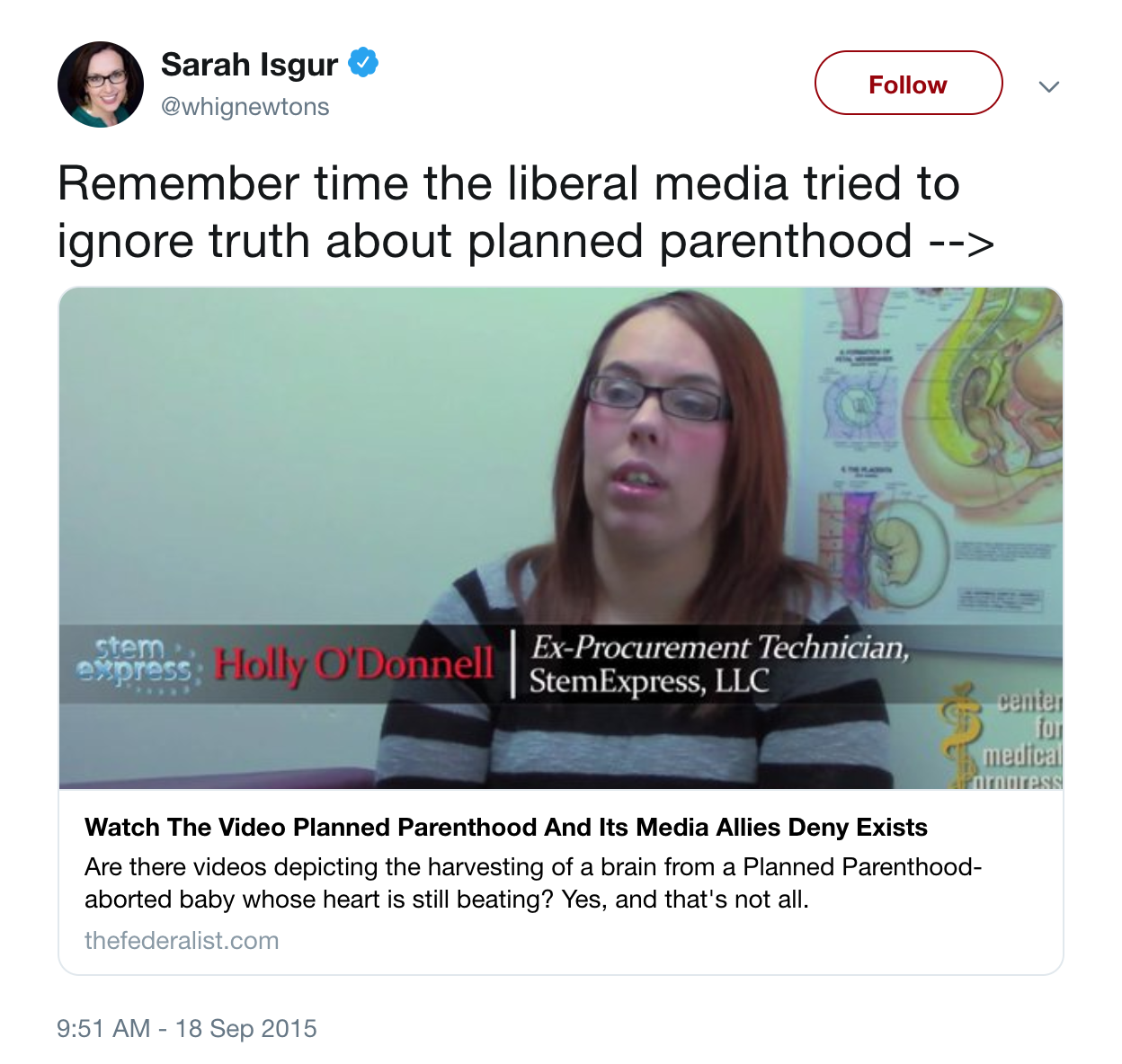 In a 2016 piece for Townhall, Isgur equated advocacy for gun regulation with efforts to ban abortions after 20 weeks. She concluded by attacking “the Left” for allegedly “demonizing conservatives who want to preserve their Second Amendment rights while refusing to even consider restrictions on killing tens of thousands of babies that could live outside the womb”:

As it happens, I’m also pro-life. And I’ll admit that I’m simply stunned that people on the Left can argue with a straight face that a mother has a right to kill a baby that can live outside the womb. But, this week in particular, I’m even more stunned at the Left’s hypocrisy on gun control—demonizing conservatives who want to preserve their Second Amendment rights while refusing to even consider restrictions on killing tens of thousands of babies that could live outside the womb. This is why it continues to be hard for conservatives to take liberal’s arguments at face value when it comes to guns. Their ideology trumps logic and facts too often. 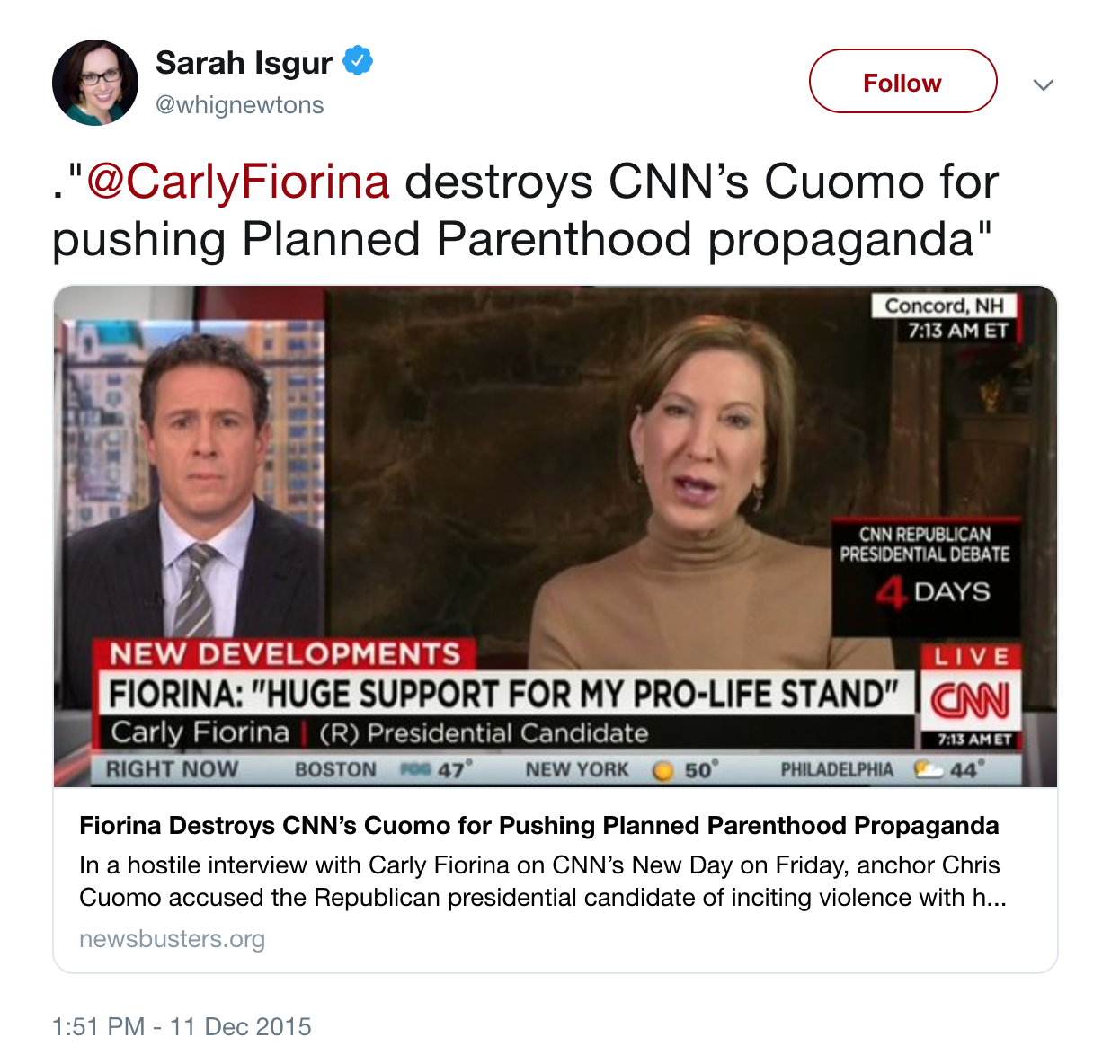