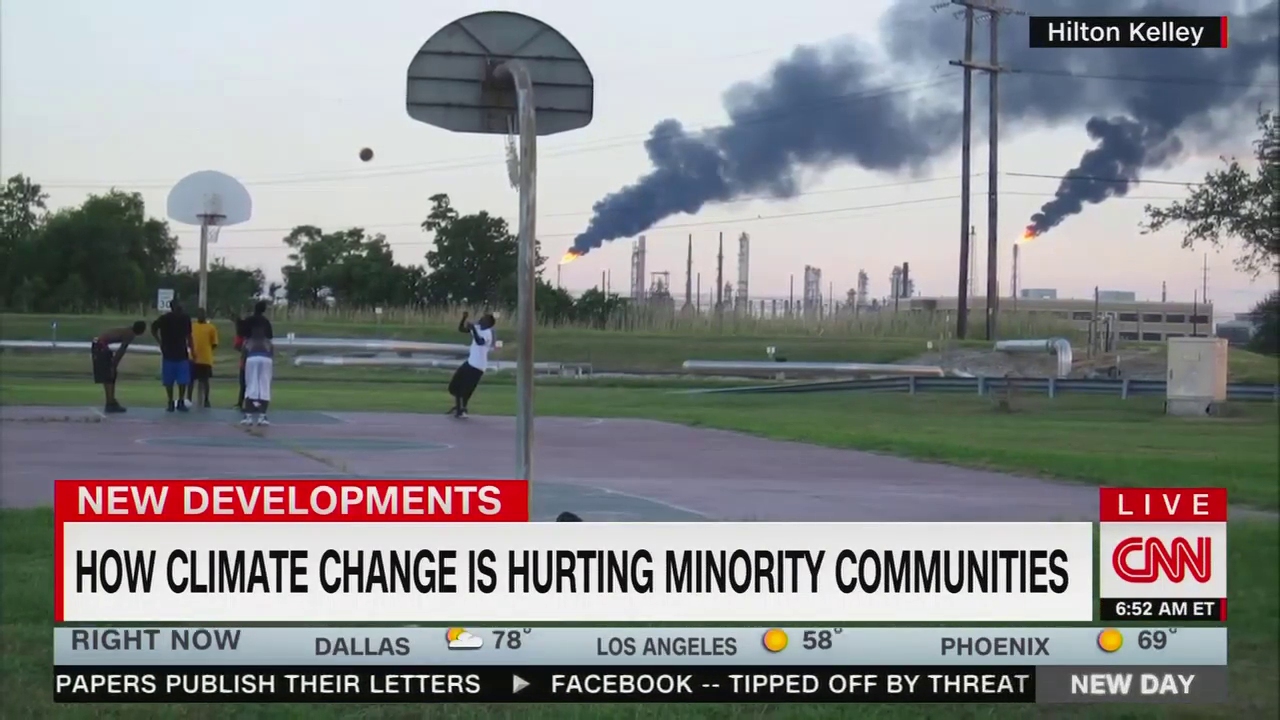 CNN’s New Day ran a segment on May 29 about how climate change and fossil fuel pollution disproportionately harm communities of color -- a critically important topic, but one that is usually neglected by cable news. The network’s chief climate correspondent, Bill Weir, went to Port Arthur, Texas, home to the nation’s largest oil refinery and site of some of the most cataclysmic flooding in American history, to listen to the cares and concerns of the people who live there. He found a community that felt ignored by the government in the wake of disasters like Hurricane Harvey and alarmed by the toxic pollutants spilling forth from the oil refinery that also provides much-needed jobs for local residents.

It is undeniable that minority and low-income communities suffer more from climate disasters and the processing and burning of fossil fuels than other Americans. African American and Latino communities in Texas and Puerto Rico are still struggling to recover from the devastation of Hurricanes Harvey and Maria. Researchers from the U.S. Environmental Protection Agency published a study in the American Journal of Public Health last year that found people of color in the U.S. are exposed to more air pollution than white people, with African Americans exposed to the most. Numerous other studies have shown the negative health effects of air pollution on minority and low-income communities.

People of color who are on the frontlines of climate change unfortunately receive far too little coverage in the corporate media. This New Day segment is a rare exception, and hopefully a signal that cable news networks will begin giving climate justice the sustained and substantive attention it deserves.

From the May 29 episode of CNN’s New Day:

JOHN BERMAN (HOST): Scientists do say climate change will eventually affect all of us. But here in the United States, minority communities are being disproportionately affected. CNN's chief climate correspondent Bill Weir tells us why.

BILL WEIR: It is the great paradox of the man-made climate crisis: The fuels that built the modern world are the same ones now destroying it. And while a dirty energy addiction will eventually affect everyone, the folks with the smallest carbon footprints are the ones who will feel the most pain.

HILTON KELLEY (FOUNDER AND DIRECTOR, COMMUNITY IN-POWER AND DEVELOPMENT ASSOCIATION): On one hand, I'm fighting to push these refineries to lower their emission levels, and they're fighting and pushing back, saying, “We can't lower it any more than what we've already done without shutting down and losing our business.” And then I have some of the residents coming to me saying, “Well, you know, what you're doing, you're going to push these industries away and we need these industries for our jobs, Hilton. Our livelihood depends on them. You know, we'll die quicker from starvation than we will pollution, so back off.”

WEIR: Hilton Kelley was born amid these sprawling refineries of Port Arthur, Texas, where the working poor live with a carbon-burning double whammy. The toxic air that comes with processing millions of barrels of oil a week, and the supercharged storms that increase in frequency and power with every barrel burned.

KELLEY: So we're getting a storm like every other year, every -- every three years or so. Not just a little storm, but storms that cause you to have to rebuild your house over and over and over again.

WEIR: For almost 20 years, he's been the kind of concerned citizen who grabs a camera when the toxic clouds get bad and has air quality officials on speed dial.

KELLEY: And they were like, “Well, what do you need to see it for and who are you again?”

WEIR: He has a stack of complaints and a few wins.

KELLEY: And we're constantly fighting those kind of battles. So, I'm forever the guard at this gate. And as you can see from my place right here, there goes the dragon right there.

KELLEY: You're constantly watching it.

WEIR: What Hilton calls “the dragon” is actually the biggest oil refinery in America. And it is owned by a Saudi Arabian company that made $111 billion profit last year, almost twice as much as Apple. Meanwhile, their neighbor, who lives here, was driven out by the floodwaters of Hurricane Harvey and, almost two years later, can't afford the repairs to move back in. This is why communities of color are worried that the gap between polluting haves and storm-surviving have-nots is only going to get wider. After Harvey flooded Motiva and other refineries, the Trump administration fast-tracked almost $4 billion to build storm barriers specifically to protect oil and gas facilities. But the predominantly Black Houston neighborhoods flooded by Harvey can't even get the government funding to upgrade their storm drains.

BRIDGETTE MURRAY (PRESIDENT, PLEASANTVILLE AREA SUPER NEIGHBORHOOD COUNCIL 57): Because she was on the back of the dredge site, as well as the water not being able to drain off, her house got about 4 feet of water.

WEIR: Is that right? Right here?

WEIR: Residents say they are invisible to disaster planners while insurance premiums skyrocket.

DR. ROBERT BULLARD (DISTINGUISHED PROFESSOR OF URBAN PLANNING AND ENVIRONMENTAL POLICY, TEXAS SOUTHERN UNIVERSITY): Those communities that get hit first, worst, and hardest should receive the aid, the assistance first. It shouldn't be in the back of the line. But right now it's the back of the line, back of the bus.

WEIR: And so a generation after the fight for civil rights, they now call for climate justice and they fight their dragons, one fire at a time. Bill Weir, CNN, Port Arthur, Texas.