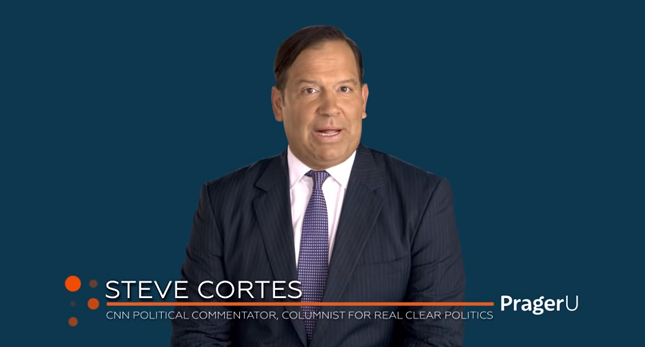 In the August 5 video, “The Charlottesville Lie,” Cortes said that media committed “journalistic malfeasance” by reporting that Trump had referred to neo-Nazis as “very fine people” following Heyer's death. Cortes echoed Trump’s own defense by suggesting that the president was referring to only the peaceful protesters on both sides as “very fine” -- but this is patently false.

As Vox’s Jane Coaston explained, the rally was “explicitly organized and branded as a far-right, racist, and white supremacist event by far-right racist white supremacists. This was clear for months before the march actually occurred.” For Cortes and other pro-Trump media figures to promote this bogus defense, they must fundamentally ignore the overt message of the rally’s organizers and supporters.

The PragerU video concluded with Cortes calling out a handful of top mainstream media outlets; his own employer was notably absent, even though his colleagues at CNN reported on the president’s shameful comments the same way as the outlets he chose to name.

In Charlottesville, they got it exactly backwards. We have been living with the consequences ever since. Plainly put: ABC, CBS, NBC, NPR, The New York Times, The Washington Post, and the others spread a malicious lie that has poisoned our national dialogue.

They should apologize to the American people for what they have done. Don’t hold your breath.

Cortes promoted the video on Twitter, saying, “Know the truth…and know that media has been lying to you about Charlottesville.” Cortes is also a contributor for RealClearPolitics, where he published a similar argument in March. Additionally, he is a longtime Trump surrogate; he sat on Trump's Hispanic Advisory Council in 2016 and is currently a member of the Trump 2020 Re-elect Advisory Council.

Update (8/5/19): CNN’s Oliver Darcy responded to the video from his colleague by pointing out both the inaccuracies of Cortes’ argument and his odd choice to participate in a video like this while being on CNN’s payroll. He tweeted, “Calling this a ‘malicious lie’ (which it's not) and ‘journalistic malfeasance’ (which it's also not) is a weird thing for someone who is a paid CNN commentator to say, given the network's accurate reporting on the matter.” Similarly, CNN reporter Andrew Kaczynski reacted to the video by tweeting, “This isn’t true.”