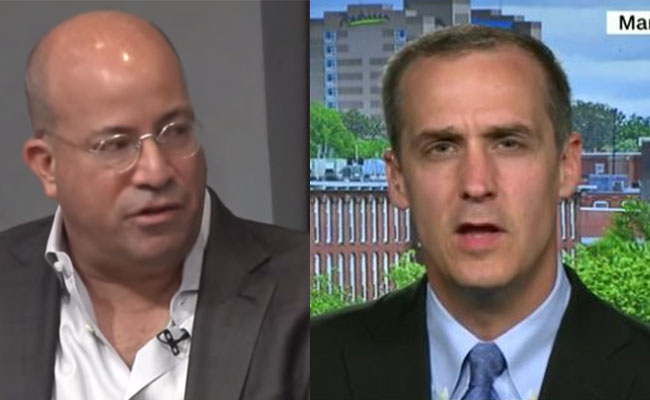 As Media Matters has documented, Lewandowski’s hiring prompted widespread criticism. Media experts have called the relationship “profoundly disturbing,” “problematic,” and a “sea of muck” among numerous other concerns. Last month, Media Matters president Bradley Beychok sent a letter to Zucker detailing the numerous ethical concerns surrounding Lewandowski, including questions about the reported non-disparagement agreement he has with the Trump campaign and the disclosure by the network in early July that he was “still receiving severance from the Trump campaign” while working for CNN.

CNN’s own media reporter Brian Stelter said the network had raised “ethical questions” with its hire of the “controversial” Lewandowski.

In an interview with Variety, Zucker said he believes “it’s really important to have voices on CNN who are supportive of the Republican nominee,” and, “It’s hard to find a lot of those. Our competitors tried to hire him too.” Before hiring Lewandowski, CNN did not seem to have much trouble finding Trump supporters to put on air. Media Matters compiled over 30 examples of pro-Trump voices on CNN, including network employees Jeffrey Lord and Kayleigh McEnany.

The network head also praised Lewandowski, claiming that “he’s done a really nice job,” and “He’s come under a much greater spotlight because of who he is, and the relationship he’s had with the media. As a result, people are going to be more critical.”

Lewandowski was hired by CNN just days after he was fired in June by the Trump campaign. Media Matters and others noted that he’s an odd fit for a news network, as his role during the campaign had been tainted by allegations that he had manhandled a reporter, and news outlets reported that he made “unwanted romantic advances” and “sexually suggestive and at times vulgar comments to -- and about -- female journalists.” He had also been accused of pushing a CNN reporter.

A Politico report indicated that Lewandowski lost a $1.2 million book deal with HarperCollins over concerns about his non-disparagement agreement with the campaign.

Lewandowski been a staunch defender of Trump’s actions in his on-air appearances, including defending Trump’s attacks on Khizr and Ghazala Khan, parents of a fallen U.S. Army captain this week.

During his  CNN employment, Lewandowski gave a nominating speech at the Republican National Convention on behalf of the New Hampshire delegation for his “friend” Donald Trump. Reports have also indicated that Lewandowski is still advising Trump on campaign strategy and pitching prospective donors on a pro-Trump super PAC.

Trump appears to be happy with the arrangement. Despite repeatedly bashing the network, Trump said in a press conference that Lewandowski has “been very loyal and he’s been on CNN and he’s really been fighting for me.”