CNN announced on July 25 that it will host a climate crisis town hall with Democratic presidential candidates, scheduled for September 4. MSNBC swiftly followed up with news that it will co-host a candidate climate forum on September 19 and 20 and will invite Republicans as well as Democrats. MSNBC journalists Chris Hayes and Ali Velshi will moderate.

The climate-focused town hall and forum are welcome additions to the election season, as is the candidate climate summit planned by Gizmodo, but they aren't replacements for the dedicated climate debate that activists, voters, and many of the candidates themselves have been calling for. The 12 debates that are officially sanctioned by the Democratic National Committee (DNC) will likely have wide viewership. The first two-night debate in Miami on June 26 and 27 got about 15.3 million viewers on the first night and nearly 18.1 million on the second, breaking the record for the biggest audience for a Democratic primary debate.

The newly announced town hall and forum, in which candidates will come on stage one at a time and won't have the opportunity to debate each other, could be expected to get far fewer viewers. MSNBC's forum will not air live on the cable channel; rather, it will be streamed online and portions will be shown on MSNBC's All in with Chris Hayes. And CNN’s town hall likely won't get a huge audience either as town halls tend to attract significantly lower ratings than debates. When CNN had five major candidates on air at successive town halls on April 23, the number of viewers ranged from 870,000 to 1.4 million. And when Hayes hosted a town hall with Rep. Alexandria Ocasio-Cortez (D-NY) to discuss the Green New Deal on March 29, 1.6 million people tuned in.

So activists will keep pushing for a full-fledged debate dedicated to climate change. The Sunrise Movement, which in June staged a multi-day sit-in at DNC headquarters to demand a climate debate, welcomed CNN and MSNBC's planned events, but tweeted, “These are not climate debates. We know that only a DNC-sponsored debate — with all the candidates on the same stage, at the same time — will put the eyes of the nation on this crisis at the scale it demands.”

In the meantime, CNN needs to put the climate crisis front and center at the second set of Democratic presidential primary debates that it's hosting on July 30 and 31, when many millions of Americans can be expected to tune in. Not only is climate change a major global emergency, but Democratic voters have consistently listed climate change as one of the issues they care most about.

The climate crisis didn't get the attention it deserved during the first two-night debate in late June, hosted by NBC, MSNBC, and Telemundo. Less than 6% of the questions were about climate change, as we reported last month. And only about 9% of the speaking time was spent discussing the topic.

When the moderators of the first two debate nights did bring up climate change, their questions were weak, and so the candidates' answers were unilluminating and dull. The exchanges did not give voters a sense of the important differences between candidates' views on climate policies and solutions, unlike exchanges on immigration and health care.

CNN's moderators -- Jake Tapper, Don Lemon, and Dana Bash -- could do it right in the upcoming debate. We'll be looking for them to ask about climate change, of course, but to do more than merely pose vague questions and then let the topic drop. They should ask specific questions about candidates' proposed plans and policy positions, push back if they make inaccurate statements, follow up when they are unclear, and help viewers understand how the candidates' stances differ. 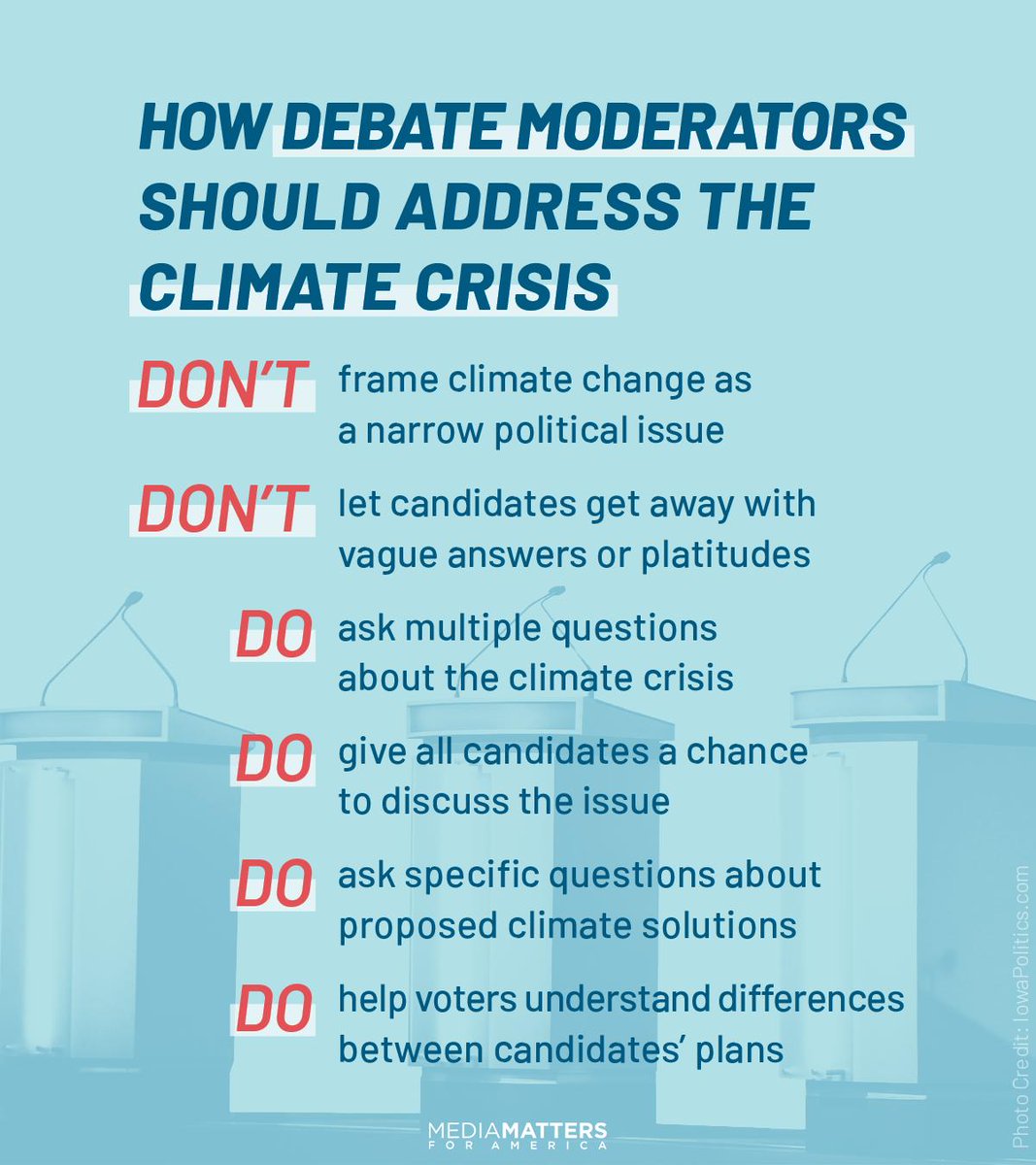 The debates, which will take place in Detroit, also offer moderators a good chance to pose questions about environmental justice. In addition to asking about the ongoing water crisis in nearby Flint, they could note that pollution-affected communities in Detroit are pushing for a Green New Deal and a just transition to a clean energy economy and then ask candidates how they would support those communities.

Between them, the three moderators have asked politicians some strong questions about climate change in the past but also missed key opportunities to ask such questions or do good follow-up.

Jake Tapper: Tapper, CNN's chief Washington correspondent, has a history of trying to get politicians on the record with their views on climate change. During the last presidential election season, he moderated two Republican primary debates, in September 2015 and March 2016, and at both he asked two candidates questions about climate change. In one case, he pressed for more clarity after Florida Sen. Marco Rubio failed to say whether he accepted the scientific consensus on climate change.

Last year, when Tapper moderated a Florida gubernatorial debate, his first question was about climate change. He directed it initially to then-Rep. Ron DeSantis (R), now governor of Florida:

Last month, while hosting CNN's State of the Union, Tapper pushed his guest, Vice President Mike Pence, to clarify his stance on climate change -- and used the phrase “climate emergency” to emphasize the urgency of the issue. Tapper read a quote from Director of National Intelligence Dan Coats about the security threats posed by climate change, then noted that the Environmental Protection Agency under President Donald Trump has rolled back rules on power plants' carbon dioxide emissions. Tapper then asked Pence, “Do you think human-induced climate emergency is a threat to the United States?” Pence tried to avoid the question, so Tapper pressed him more than half a dozen times to give an answer.

Don Lemon: Lemon, a CNN anchor, attracted criticism for the way he presented a climate question during a Democratic presidential primary debate in October 2015. Lemon was sharing questions from the public and played a video of a woman who asked, “What will you do to address climate change?” Lemon reframed the question: “Please tell Anna how you would protect the environment better than the other candidates on the stage.” With this phrasing, he seemed to say that climate change was no different from any other environmental issue and didn't warrant specific attention as a major threat in and of itself.

Lemon was also a panelist at a March 2016 Democratic primary debate, but he asked no questions about climate change at that one.

Lemon did a better job when he moderated a CNN town hall with Democratic presidential contender and Minnesota Sen. Amy Klobuchar in February of this year. After an audience member asked about the Green New Deal, Klobuchar replied, “We may not have agreements on exactly how it will work and when we can get it done,” before discussing climate policies she supports such as reentering the Paris climate accord and restoring Obama-era vehicle mileage standards. Lemon then asked Klobuchar a series of follow-up questions that pushed her to explain why she believes the goals of the Green New Deal are “aspirations” and why “compromises” will be needed.

Dana Bash: Bash, CNN's chief political correspondent, was a panelist at four presidential primary debates in 2015 and 2016 and she did not ask a question about climate change at any of them.

Last November, while guest-hosting State of the Union, Bash asked Sen. Joni Ernst (R-IA) about the new National Climate Assessment report that warned about dire effects on the U.S. from climate change. Ernst said, “Well, we know that our climate is changing. Our climate always changes. And we see those ebb and flows through time,” and then proceeded to give a vague answer. Bash followed up by asking, “Is there anything that the Senate should do?” But Bash did not call out Ernst for using a common climate-denier trope and downplaying the problem in a way that contradicts well-established climate science.

All three moderators now have a chance to highlight the climate crisis more than they have in past debates -- and if they do it well, they could demonstrate that they would be good moderators for CNN's climate town hall in September.

If you want to hear the climate crisis discussed at the debate, tell CNN via this page, and tweet suggested questions to Dana Bash, Don Lemon, and Jake Tapper.