Major news organizations have honored Chelsea Manning's - formerly known as Bradley Manning - explicit request to be identified as a woman, but CNN continues to make excuses for misgendering Manning in its news coverage.

On August 22, Manning - who will soon begin serving a prison sentence for leaking classified documents to WikiLeaks - announced in a statement to NBC that she wishes to be identified as a woman and go by the name Chelsea, stating:

As I transition into this next phase of my life, I want everyone to know the real me. I am Chelsea Manning. I am a female. Given the way that I feel, and have felt since childhood, I want to begin hormone therapy as soon as possible. I hope that you will support me in this transition. I also request that, starting today, you refer to me by my new name and use the feminine pronoun (except in official mail to the confinement facility).

Following Manning's announcement, many news organizations struggled with deciding how to identify Manning in their reporting. Some outlets, like Slate and Mother Jones, quickly honored Manning's request and began referring to her as a female. Others, like The New York Times and the Associated Press, were reluctant at first but did agree to stop misgendering her, stating that they had been “persuaded” by arguments in favor of correctly identifying Manning.

CNN, however, has continued to refer to Manning by the name Bradley and use male pronouns.

During the August 22 edition of The Lead with Jake Tapper, Tapper explained that CNN will continue to refer to Manning as a male because “he has not yet legally changed his name.” Moments later, he spoke with Lauren McNamara - who he identified as “a transgender” - about Manning's request for hormone therapy while in prison:

Following the interview, MacNamara and her fiancée Heather McNamara challenged Tapper over his misgendering of Manning on Twitter, prompting Tapper to respond by saying “if you have an issue with CNN policy, you should take it up with the policy makers”: 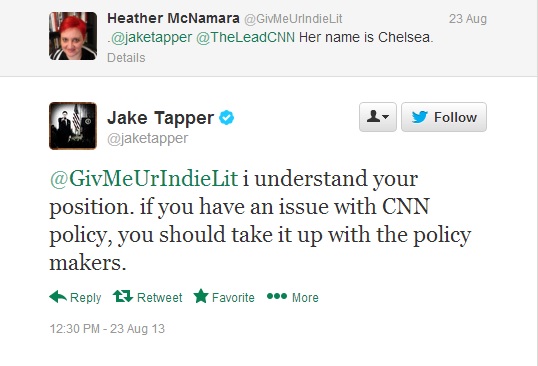 CNN's “policy” on identifying transgender people contradicts the guidelines set forth by the Gay and Lesbian Alliance Against Defamation (GLAAD) and the National Lesbian & Gay Journalists Association (NLGJA), which both state that transgender people should be referred to by their preferred name and gender identity, regardless of the presence of a legal name change or gender reassignment surgery.

The policy is also unfairly enforced, as the McNamaras point out, because CNN doesn't require proof of a legal name change before referring to celebrities like Lady Gaga and Vanilla Ice.

In an open letter to the network, Heather McNamara outlined the utter absurdity of CNN's policy on identifying transgender people:

Waiting for Chelsea to achieve a legal name change and physical transition, including hormone treatment and possible surgery, is unnecessary and inhumane. The military currently refuses to treat transgender people with hormone replacement therapy and/or surgery. In any case, that line is arbitrary. There is good reason that trans people consider coming out to be the only step necessary to command respect of their genders.

At what point would her hormone replacement be considered sufficient? When a blood test showed her testosterone as sufficiently repressed? Or not until surgery? Only one in five trans women get sex reassignment surgery, and even fewer trans men-only one in 26. The surgery is prohibitively expensive and can lead to complications. At what point would she be considered to be presenting as a woman? When she wears makeup and dresses? And if I wear pants and no makeup, am I therefore presenting as a man? Would it then be acceptable to call me “he?” I hope you can understand that, under scrutiny, it becomes significantly more confusing to deny a trans person's gender than to accept it.

The network's insistence on continuing to identify Manning as a man suggests that CNN doesn't take her gender identity -- and by extension, the identities of all transgender people -- all that seriously. As the McNamaras write:

As it stands, there remains no serious medical or scientific debate over whether transsexualism exists. Trans people are real people who live in the real world, not some mere flight of fancy so bizarre as to warrant suspicion that this is a fiction. But such bafflement and incomprehension are what an outlet like CNN encourages when they - one of the world's leading media organizations - are mysteriously unable to educate themselves on the indisputable facts of this issue.

That subtle bias has already reared its head amidst CNN's coverage. During the August 24 edition of CNN Newsroom, host Fredricka Whitfield listened as frequent legal commentator Avery Friedman joked that Manning could get “good practice” presenting as a female in prison. Rather than object to his statements, Whitfield responded by questioning why Manning had decided to wait until after the trial to address her gender identity issues, implying that Manning's request for hormone therapy was somehow opportunistic or insincere.

Unless CNN doesn't actually believe Manning is being sincere in her desire to identify as a woman, then there is no good defense of continuing to ignore her requests to be referred to as such. In failing to identify Manning as a female, CNN joins a handful of predominantly conservative outlets - including Fox News - that still stubbornly refuse to take the reality of transgender people seriously.