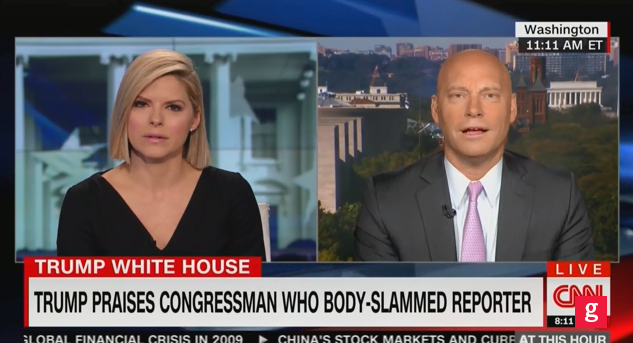 CNN anchor Kate Bolduan hosted Marc Short, a CNN commentator and former director of legislative affairs for President Donald Trump, without disclosing that Short signed a non-disclosure agreement (NDA) that bars him from criticizing the president. Among the topics discussed was Trump's praise for a congressman's physical assault of a reporter last year, which Short called “partly entertainment.”

As The Daily Beast reported, there is a “blanket non-disclosure agreement all Trump campaign and West Wing staffers are reportedly required to sign” that “contain[s] a non-disparagement clause in which the signee agrees not to 'demean or disparage publicly' President Trump, his family, their company, or any of the family’s assets.” According to one media expert interviewed by The Daily Beast, a media outlet failing to disclose the existence of an NDA constitutes “a significant ethical breach”:

“If someone is bound by an NDA and that’s not disclosed, that’s journalistic malpractice,” Steven Roberts, a professor of media ethics at George Washington University, told The Daily Beast. “If you don’t disclose that someone is contractually obligated, that’s a huge ethical problem and a huge ethical mistake.”

The professor continued: “You’re deceiving your audience if you don’t disclose that. It’s a significant ethical breach because media ethics start with the principles of transparency: never confuse or deceive your audience.”

Among the subjects discussed in the CNN segment featuring Short -- who legally cannot criticize the president -- was Trump's endorsement of violence against a reporter. At a rally in Montana last night, Trump recounted an incident in which Rep. Greg Gianforte (R-MT) physically attacked The Guardian's Ben Jacobs, and said, “I had heard he body-slammed a reporter. ... Anybody that can do a body-slam, that’s my kind of guy.” Bolduan asked Short if he could ”make an honest case that what the president was saying last night was just a joke." In response, Short said that “the timing” of the comment “is inappropriate,” but downplayed Trump's statement saying it was “partly entertainment.”

From the October 19 edition of CNN's At This Hour with Kate Bolduan:

KATE BOLDUAN (ANCHOR): Joining me right now is CNN political commentator and former Director of Legislative Affairs for the Trump White House Marc Short. Thanks for coming in.

MARC SHORT: Thanks, Kate, Thanks for having me on.

BOLDUAN: You heard what the president said last night about the congressman who -- about Gianforte, who pleaded guilty. He was charged for assaulting a reporter back during his special election. Especially given the disappearance of the Washington Post columnist, Jamal Khashoggi, can you make an honest case that what the president was saying last night was just a joke and no big deal?

SHORT: Kate, I think that the optics and the timing is obviously unfortunate. I do think that the president's rallies are partly political and partly --

SHORT: OK, OK. But they're partly entertainment, and that is what people come to see in elements too. But yes, I can confess to you that the timing is inappropriate.

SHORT: I just said -- I said the timing is bad.

BOLDUAN: I hope Greg Gianforte has more qualities going for him than the fact that he likes to body-slam reporters.