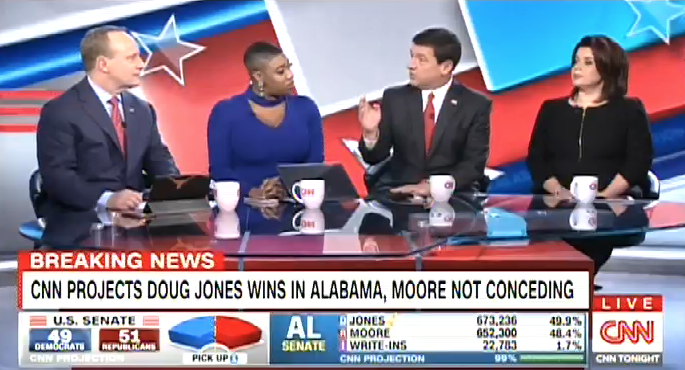 During his December 13 radio show, CNN pro-Trump contributor Ed Martin attacked his fellow CNN employees calling them “rabid feminists” and “black racists” while calling the network “the swamp” and “the beast.”

During coverage of the December 12 Alabama special election, Martin shilled for Trump and for defeated Alabama senatorial candidate Roy Moore while aggressively confronting fellow contributor and panel member Ana Navarro. Others on the panel included Symone Sanders and journalist April Ryan. The following day, while hosting his radio show The Ed Martin Movement, Martin attacked his co-panelists, calling them “rabid feminists” and “black racists.” Martin, who has previously called CNN “fake news,” also went after the network, referring to it as “the swamp.”

ED MARTIN: What happens when you're trying to drain the swamp, is the swamp fights back. And so when I was in Washington, D.C., last night, and you might have seen it if you saw it, it was a hot night, a hot topic. It was a wild panel, we had two or three people on there that were just rabid feminists, actually racial -- racists, two of the women were racists, they were just racists, black racists. Everything that you say is going to be called racist. I mean, it was outrageous, but anyway.

Roy Moore's problem was not only the accusations that were, I think, unfairly leveled against him  -- and they were you know, attacks on whether 40 years ago he had abused someone, or misused someone or mistreated someone. But then they were down the stretch they were he had said things about various positions including slavery and homosexuality and things, and they were all characterized in a way. None of that matters when I tell you the following fact, as I sat on the stage, on the set in the CNN studios. I mean, I go into the swamp, I enter the beast so you don't have to, so I can report back on what I found and here's what I found. What you need to know, what you need to know, what you must know, what you hear after I tell you, what you will now know, and what you can't forget, it has to inform what you do. As I sat on the stage next to this woman that's just racist, who went crazy, and everything is about race, she confessed -- that's the word I'd use -- but she confessed that her groups had 'mobilized,' that's the term they used, 'mobilized' voters in Alabama spending up to $3 million dollars to mobilize black voters in the cities.

While Martin has only been a CNN contributor for a few months, he has already raised eyebrows. Earlier this week, Martin defended Moore's dismissive comments about slavery by stating, “when the Jews were in bondage for years, they still loved each other.” Previously, he attacked a woman who reported that Roy Moore molested her as a child, asking, “what is this woman? She's got multiple bankruptcies.” He also defended President Donald Trump's ethnically-based insults against Sen. Elizabeth Warren (D-MA) calling them “fun and effective,” and “100 percent” appropriate.