CNN political commentator Ben Ferguson regularly uses his Facebook page to post memes with false information and fabricated quotes, including an image with a made-up Rep. Alexandria Ocasio-Cortez (D-NY) quote that was used to portray her as stupid.

He also pushes bigotry on his page, including claiming that Islam is a religion “that sends out people from PRAYER in church to kill people and burn down buildings” and posting a meme of Black people in Ferguson, MO, with text saying, “Looting: when free food, housing, phones, healthcare & education aren’t enough.” Ferguson's Facebook page has over 800,000 followers and touts his CNN employment as a credential. CNN didn't respond to a request for comment.

CNN has employed a stable of pro-Trump commentators, often with poor results and at the expense of its own reporting. As former Media Matters staffer Carlos Maza wrote for Vox, the outcome is CNN creating “news coverage that cares more about fighting and drama than it does about serious truth telling.”

In March 2018, Media Matters documented that Ferguson had used his Facebook page to endorse and promote vitriolic and conspiratorial attacks against CNN. After publication, Ferguson took down those anti-CNN posts and apologized, claiming they were “posted by an outside company that did not accurately represent my opinion. I apologize to my radio listeners and the CNN community. I am extremely proud of my relationship with CNN and everyone I work with!”

While CNN has said it is committed to “facts first,” it continues to associate itself with Ferguson. Specifically:

Ferguson posted a meme featuring Ocasio-Cortez alongside the following remark in quotations: “Why is Alaska cold and Hawaii hot if they are next to each other?” (While some Ferguson fans in the comments section noted that the quote was fake, many responded by blaming the New York congresswoman for supposedly saying it.) There is no evidence Ocasio-Cortez said that; to the contrary, variations of that quote have been attributed to others over the years.

He also posted a meme suggesting that Ocasio-Cortez was responsible for New York losing “25,000 jobs and 27.5 billion” dollars in the wake of the recently shuttered Amazon-New York deal. In reality, as The New York Times noted, “Ms. Ocasio-Cortez was an outspoken opponent of the Amazon deal, which would have located a new corporate campus near her Queens and Bronx district. But she was hardly a leading organizer on the ground, where local officials and left-leaning activists pushed for the company to make additional concessions or leave. … Ms. Ocasio-Cortez herself has said her impact has been overstated.”

Ferguson posted another meme criticizing AOC for supposedly having “no real life experience” and attacking her age, stating that “at 28 she wants to tell us what the government needs to do with our economy!” Apart from its problematic argument -- for starters, the New York congresswoman certainly has “real life experience” -- that meme is the height of hypocrisy from the CNN pundit; according to the first line of his biography, “At 13, Ben Ferguson became the youngest radio talk show host in the country, and the youngest nationally syndicated host at 20.” 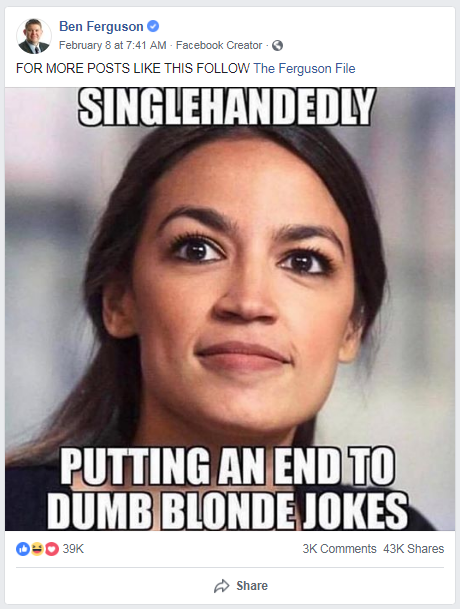 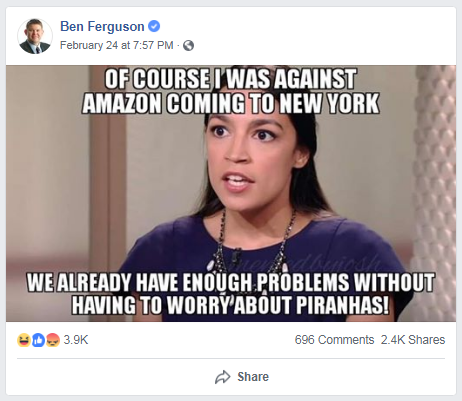 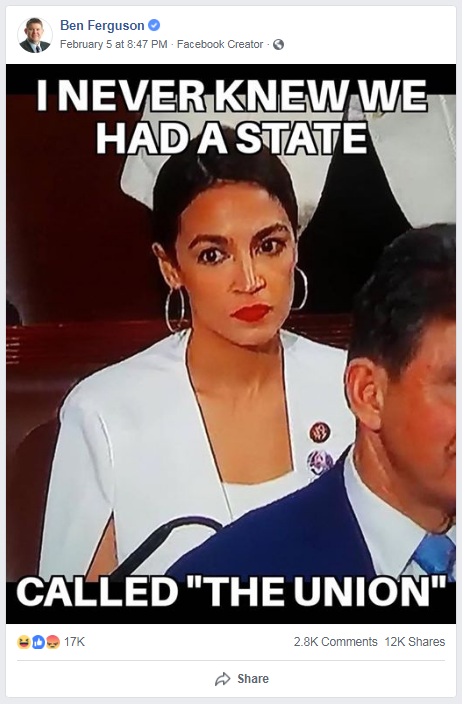 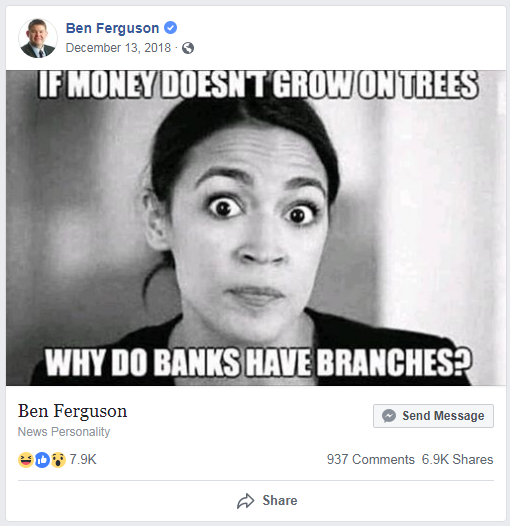 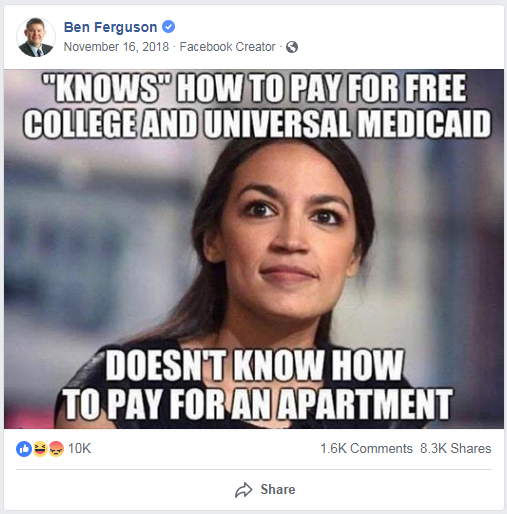 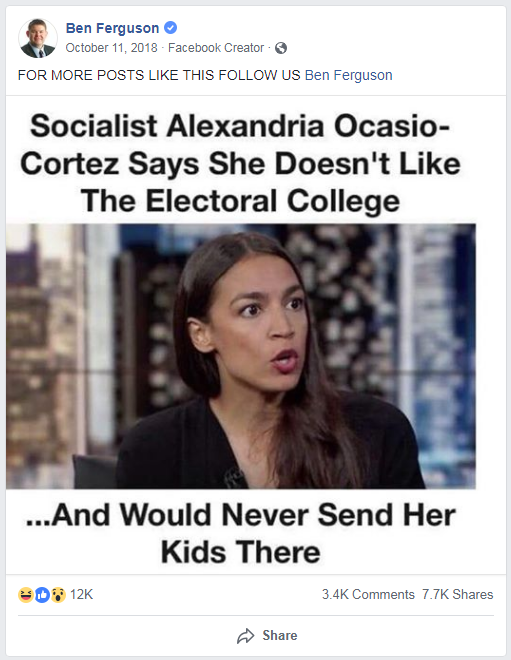 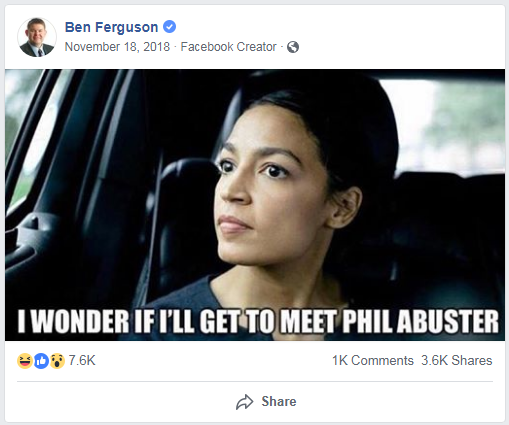 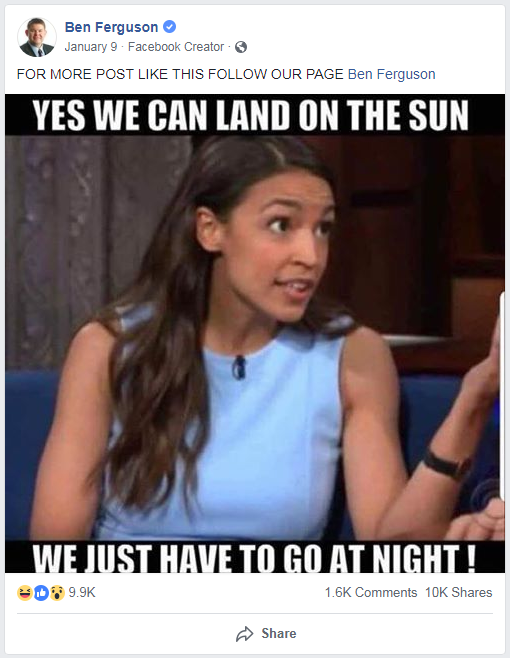 Ferguson posted a meme showing a large yard of trash with the caption, “What’s left after the Earth Day celebration by a liberal group.” In reality, that image is reportedly from “the scene in front of the University of Georgia Law Library one Sunday morning in September 2009, the aftermath of tailgating activities during a football game the night before.” Indeed, trash bins in the picture display the university’s “G” logo.

Ferguson posted a false meme claiming that after visiting the White House for helping win the NCAA college football championship, Clemson University quarterback Trevor Lawrence said: “President [Donald] Trump got all our favorite foods. It was the best meal we ever had. Then we go and see the coastal elite media trashing it for not being organic vegan. We’re football players, not bloggers. This was a perfect blue collar party.”

The Associated Press reported in a January 15 article about “posts circulating on social media”:

Lawrence denounced the quote Tuesday tweeting, “I never said this by the way. I don’t know where it came from. However the trip to the White House was awesome!”

“Everything that is presented in that meme is fabricated,” Taylor said.

Ferguson posted memes claiming that no one called Trump a racist until he ran for president. That claim is false; as Vox noted, “Donald Trump has been getting called racist since 1973." 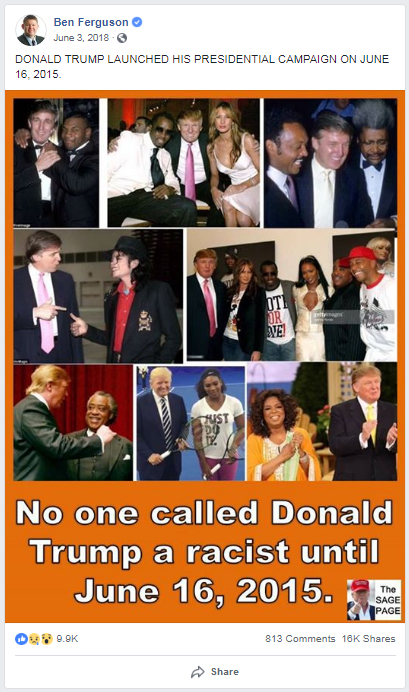 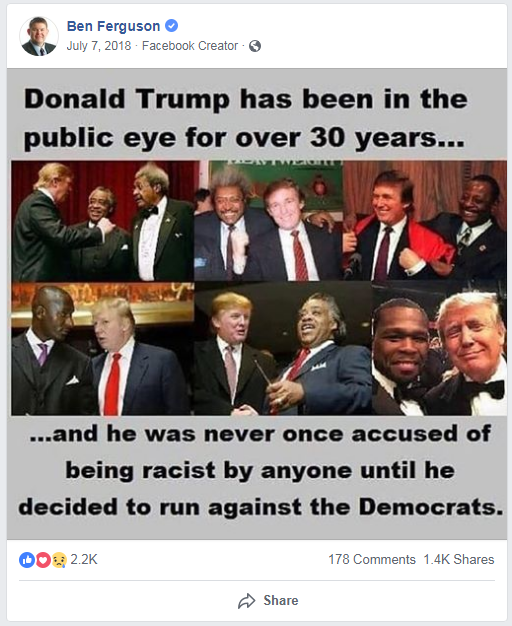 After actor Jussie Smollett was “arrested for allegedly filing a false police report claiming he was the victim of a hate-crime attack,” Ferguson posted a meme suggesting that Sen. Kamala Harris (D-CA) helped Smollett stage the attack to promote her anti-lynching bill. The meme offered no actual evidence for the supposed collusion; Harris said in response to the arrest that she’s “sad, frustrated, and disappointed. When anyone makes false claims to police, it not only diverts resources away from serious investigations but it makes it more difficult for other victims of crime to come forward.”

Ferguson has also posted many bigoted memes over the years. Here are some examples: 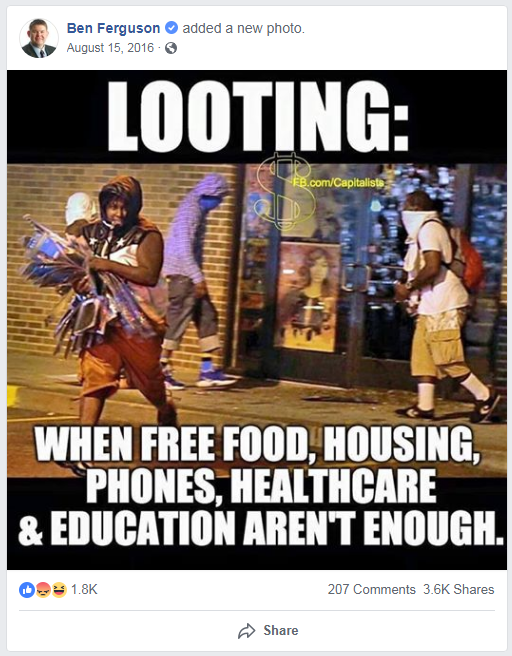 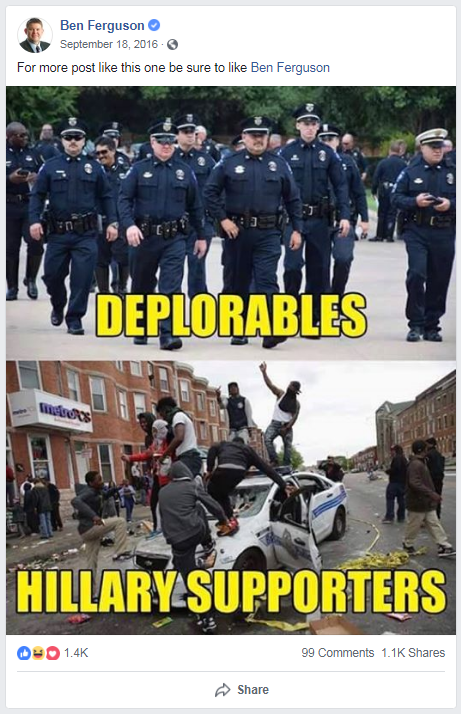 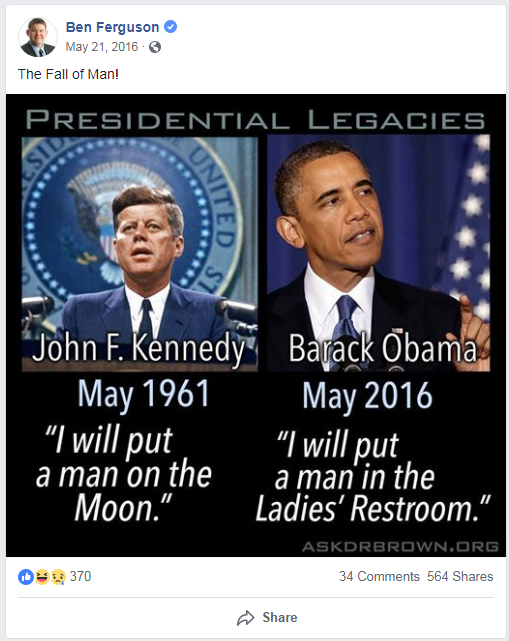 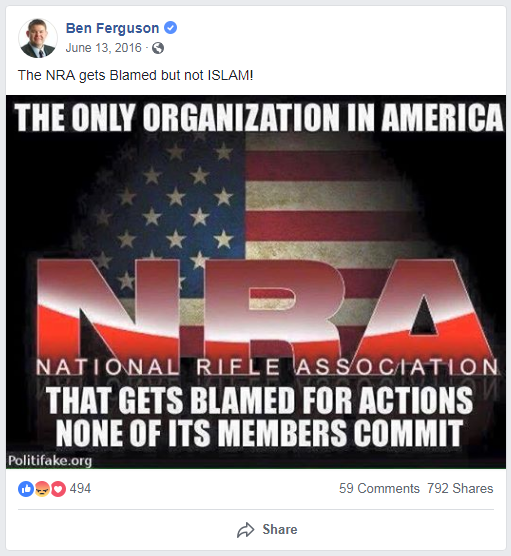 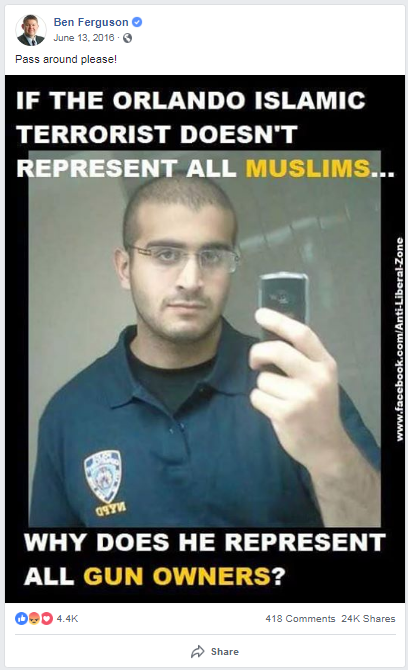 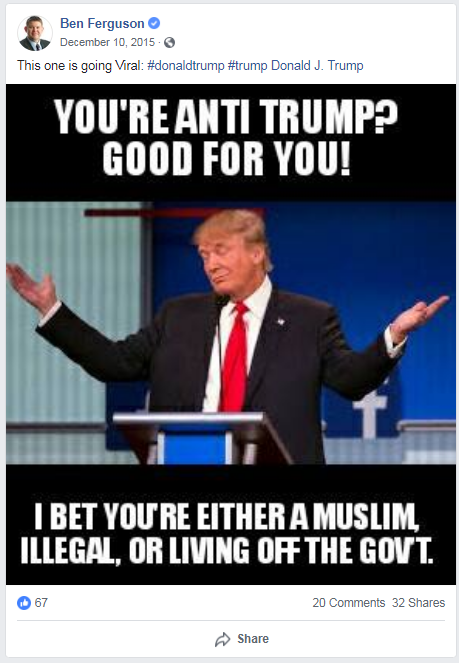 In September 2012, Ferguson wrote on Facebook: “Clinton and the state dept. declare this morning: ‘Islam is a Great Religion’ CAN WE BE REAL FOR A MINUTE, AND NOT POLITICALLY CORRECT. a religion that sends out people from PRAYER in church to kill people and burn down buildings IS NOT A GREAT RELIGION. I AM JUST SAYING!!!!!!!”

He's also wrote on Facebook in May 2016: “I am so sick of these sick liberals telling me this is normal! We need to stand up to this attack on the traditional family! #genderidentity #transgender.”

In August 2011, he wrote: “OBAMA TO ILLEGALS: We wont deport you unless you kill somone!!!!! Welcome to buying votes... he is trying to own hispanics like he thinks he owns African Americans... This is modern day slavery.”