CNN has been on a civility kick. A transcript search shows that variations of the words were said over a hundred times on June 25 alone. One good example is the network’s June 25 highlight reel of allegedly incivil things that have recently been said by various people. As my colleague noted, the video conflated examples of liberals being mean with conservatives being racist:

Hang this in the Louvre. CNN's "both sides" montage perfectly encapsulating the fallacy of mainstream media equivalence: all the conservatives examples are bald racism and all the liberal examples are...being rude pic.twitter.com/B6mOARNEv6

Later in the day, when discussing Trump’s separation and detention of immigrant families with immigration lawyer David Leopold, CNN anchor Kate Bolduan interrupted Leopold and chided him for calling White House senior policy adviser Stephen Miller a white nationalist, asking, “Where is the fact on that?﻿”

CNN anchor: “I just did an entire segment about civility here, I don't know if you want to call Stephen Miller a white nationalist” pic.twitter.com/iXAhpBBynX

Calling Miller a white nationalist is not some gratuitous insult. It is a simple, straight-forward analysis of his ideology. Splinter News’ Clio Chang aptly noted the evidence:

There is plenty of evidence that Stephen Miller, the architect of Donald Trump’s hard-line racist immigration policies, is a white nationalist. He crafted Trump’s Muslim ban. His thumbprint is smeared all over the administration’s family separation policy, the point of which is to tear immigrant families apart and deter others from entering the country. Miller reportedly laughed during a meeting when Trump made up names for immigrants and described imaginary crimes they might have committed. He has pushed for some of the harshest overhauls of our immigration system, including cutting legal immigration by half over the next decade. A White House aide recently told Vanity Fair Miller “actually enjoys” seeing pictures of children detained at the border: “He’s Waffen-SS,” the person said.

As journalist Chris Hooks also noted, Miller and white nationalist Richard Spencer worked together at Duke University to bring in white nationalist Peter Brimelow to speak about immigration. Spencer even told Mother Jones that he was glad no one was reporting on this connection:

“It’s funny no one’s picked up on the Stephen Miller connection,” Spencer says. “I knew him very well when I was at Duke. But I am kind of glad no one’s talked about this because I don’t want to harm Trump.”

This determined ignorance of the Trump team’s white nationalism is particularly galling since CNN has been profiting off of Trump’s team for years now. The network has hired a parade of pro-Trump analysts who, like the children at Willy Wonka’s factory, have been inevitably dropped as they become too toxic.

As Maza noted, the presence of pro-Trump voices turned discussions into screaming matches more suited to reality television than to a news network. And like reality television, the names rotated in and out with the content staying the same.

Lewandowski resigned from CNN following the election (CNN refused to fire him even after reporting revealed the Trump campaign was still paying him). McEnany moved on to become the spokesperson of the Republican National Committee. Hughes left CNN before the inauguration. And most notably, CNN eventually fired Lord after he issued a Nazi salute on Twitter.

In their stead, CNN rolled in new pro-Trump voices. One of the first was former Trump senior communications adviser Jason Miller. By mid 2017, the channel’s paid Trump shills were flooding the network: 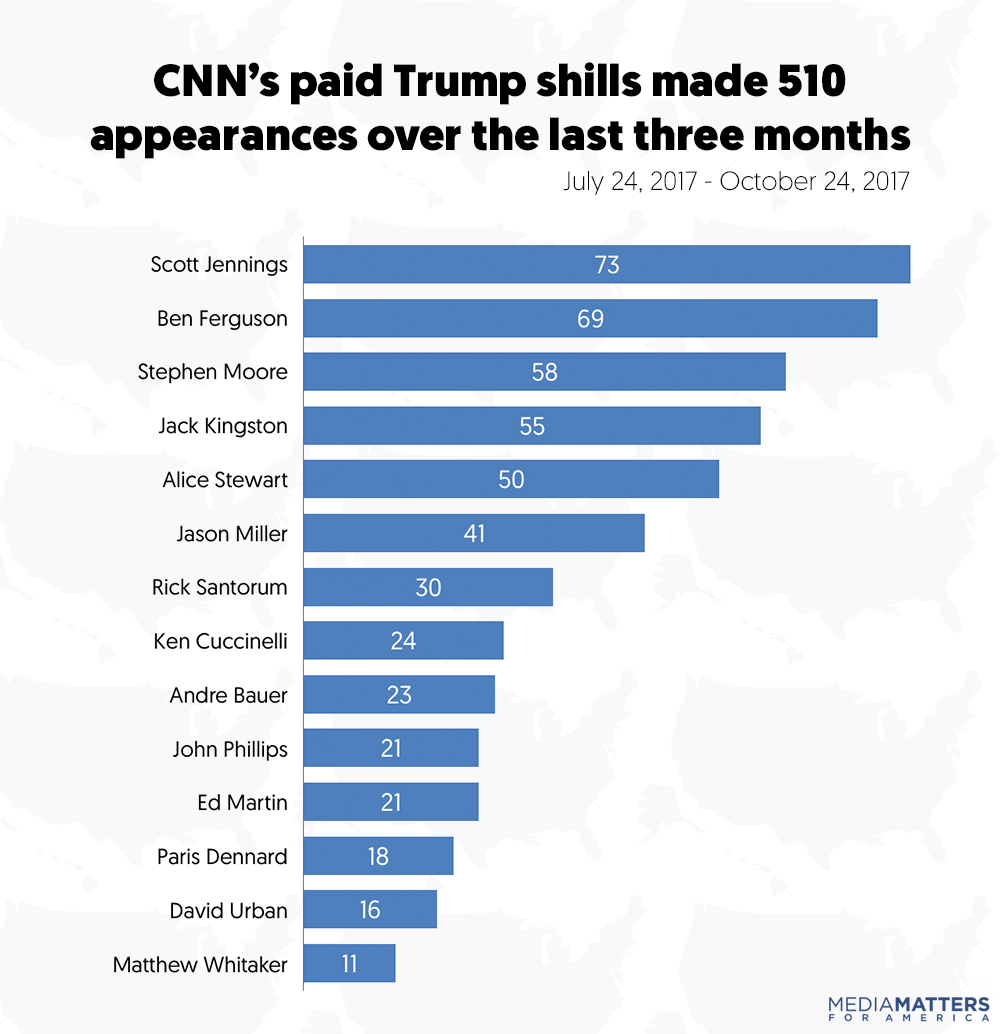 Media Matters’ senior fellow Matt Gertz noted in October 2017 how the network continued to flood its airwaves with bullshit:

[Ben] Ferguson, for example, has repeatedly been called out by his CNN colleagues this month for offering nonsensical diversions in discussions of Trump’s attacks on NFL players who protest racial inequality during the National Anthem. And [Stephen] Moore -- who typically appears on the network to lie about Trump-backed health care proposals -- on Monday derailed a CNN panel discussion about then-Fox News host Bill O’Reilly paying a hefty sexual harassment settlement by saying that the real solution is for powerful men to never be alone in a room alone with a woman. [Jack] Kingston, for his part, last night attempted to make excuses for Trump’s unprecedented falsehoods, saying that “the American perception is that politicians lie” and Trump is no worse than other presidents; the rest of the panel denounced him, with anchor Don Lemon scolding him for “condoning bad behavior.”

When major stories break, such as Trump’s string of indefensible responses to the lethal white supremacist rally in Charlottesville, VA, Trump’s CNN supporters blanket the network’s coverage. That result was a trainwreck, with the president’s shills sidelining discussions with praise for Trump’s response and dismissals of the importance of the rally.

In September 2017, CNN hired Ed Martin, president of the Eagle Forum Education & Legal Defense Fund, ostensibly as Lord’s replacement. CNN was either ignorant or tolerant of the fact that Martin had previously called CNN “fake news” and had made flatly racist statements. In 2016, Martin told a crowd at a right-wing rally: “You're not racist if you don't like Mexicans. They're from a nation. If you don't think Muslims are vetted enough, because they blow things up, that's not racist.”

Martin predictably used his appearances to turn CNN into a trainwreck, while using his radio show to rail against the network:

Martin stopped appearing on CNN after December 14 when Media Matters posted audio of Martin complaining about appearing on a panel with CNN commentators “who were just rabid feminists, actually racial, racists -- two of the women were racists, they were just were racists, black racists.” CNN eventually confirmed to The Hollywood Reporter on January 18 that Martin no longer worked for the network.

Martin’s role was soon taken by pro-Trump commentator Steve Cortes, who has said that he went to CNN “partly at the suggestion of the White House itself and the president himself.” Like Martin, Cortes also had previously called CNN “fake news.” During his time as a contributor at Fox News, Cortes had compared undocumented immigrants to violent thieves. And on CNN, Cortes has not only made similar statements, he’s also made laughably false and ridiculous claims. Michelle Wolf called out CNN’s charade with Cortes:

MICHELLE WOLF (HOST): Aw man, as a fan I just love this kind of TV magic. Watching the host act like the guest forced his way into the studio is so compelling, you almost forget that he was invited on and paid! Good job, Don, you knew full well Steve was going to lie and you gave a fun clip to share, and that's exactly why you invite him back all the time.

Here’s a brief history of things that paid CNN commentators have said on-air since the inauguration:

And it’s not only the paid commentators who are a part of CNN's “false equivalency” problem. Just last week, after Lewandowski mocked a 10-year-old with Down syndrome who was separated from her mother at the U.S. border, CNN invited him on to talk more about his remark.

At the White House Correspondents’ Association dinner, Michelle Wolf called out this sycophantic relationship between the media and those in power. Wolf later told Vulture (emphasis original): “It was gross! Like, I saw [CNN President] Jeff Zucker hugging Kellyanne Conway, and it was just like, Oh! You’re all in this together! People are really getting hurt, and you guys are just celebrating your money. It’s all a game, nothing more than ‘How will we best profit off of this?’ It was icky.” Nevertheless, a CNN panel criticized Wolf’s jokes, with a CNN host saying that some of her jokes were “way too personal.”