Over the past few days, CNN and MSNBC anchors have repeatedly issued disclaimers after airing live footage of President Donald Trump’s remarks, clarifying that many things the president had said simply weren’t true. While these quick turnaround fact checks and acknowledgement of the president’s lies are a step in the right direction, it raises the question: If the purpose of the news is to inform viewers, why keep airing Trump's constant misinformation live in the first place?

On September 25, cable news outlets aired Trump’s meeting with Ukrainian President Volodymyr Zelensky. After broadcasting Trump's remarks, both CNN and MSNBC noted that what viewers had just heard was full of misinformation. CNN’s Brooke Baldwin stated, “We just need to note before we analyze all of this that, you know, everything he said about the Bidens is 100% wrong.” Likewise, on MSNBC, Katy Tur informed viewers: “It’s important to underscore, once again, that the president has offered absolutely no proof for any of his allegations.”

Cable networks had to fact-check the president again later that day when they aired Trump’s press conference at the U.N. General Assembly. MSNBC’s Nicolle Wallace decided to cut away as Trump was speaking, noting, “We hate to do this, really. But the president isn't telling the truth.” CNN waited until after Trump’s remarks to state, “First of all, we should just note that he said a lot of things that were not true.”

CNN and MSNBC still aired Trump live the next day despite the multiple fact checks and notes of caution they had to issue the day before. This time, CNN took a more proactive approach, airing an on-screen fact check in real time as Trump was speaking. 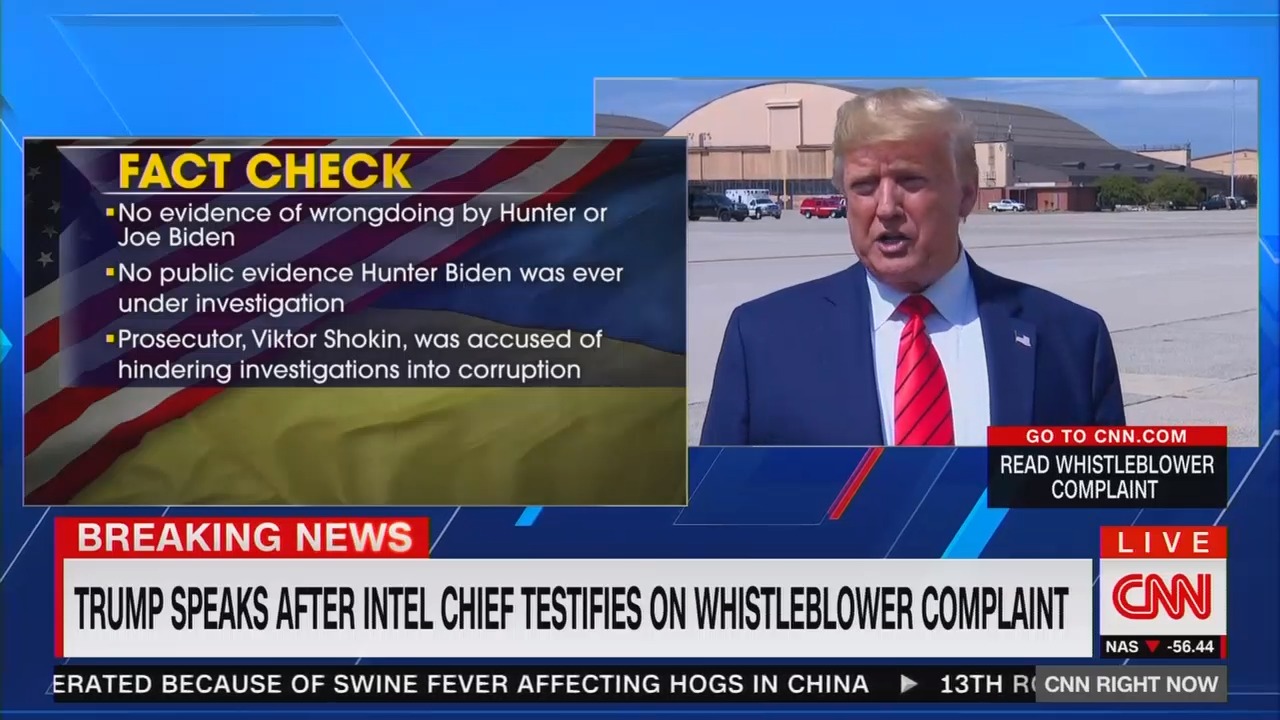 After Trump finished speaking, CNN’s Brianna Kielar noted, “We just need to fact check some of the things the president was saying there.” Likewise, MSNBC’s Wallace explained, “Donald Trump there repeating some of his smears and lies against the Bidens, obviously convinced that if he says it often enough and is amplified enough times on Fox News, enough people will believe it’s true. Those claims: not true.”

Wallace’s statement is interesting because she acknowledged in part that Trump hopes if his lies are amplified enough, people will believe they’re true. But by airing Trump live, that’s exactly what CNN and MSNBC are doing: They’re amplifying his false claims, even if they then fact-check him.

Having acknowledged that Trump lies constantly, why are news networks still giving him a platform to misinform their viewers?