The Drudge Report, Fox News, and The Kudlow Report provided a forum for a chart released by congressional Republicans that purported to show “the complex health care reform proposal by Democratic congressional leaders.”

On July 15, the Drudge Report, Fox News, and CNBC's The Kudlow Report provided a forum for a chart released by congressional Republicans that day -- a day after House Democrats introduced their health care reform bill -- that purported to show “the complex health care reform proposal by Democratic congressional leaders.” The release from Rep. Kevin Brady (TX) about the chart, titled “BAFFLING FLOW CHART; Public Gets Peek at Complicated Bureaucracy in Democratic Health Care Plan,” stated that the chart “depicts how the health care system would be organized at the national level if the Democrats' plan became law. These new levels of bureaucracy, agencies, organization and programs will all be put directly between the patient and their health care.”

The conservative media's promotion of the House Republican chart recalls the media attention devoted in 1994 to a misleading chart -- distributed by the office of Sen. Arlen Specter -- that then-Senate Republican leader Bob Dole claimed illustrated “what the health care bureaucracy would look like under” President Clinton's health care reform plan.

The chart was repeatedly highlighted by various Fox News outlets throughout the day. FoxNation.com posted the chart at 12:39 p.m. ET, linking to the July 15 FoxNews.com article “Republicans Warn of 'Web of Bureaucracy' in Democrats' Health Care Plan,” which also provided the chart. From FoxNation.com: 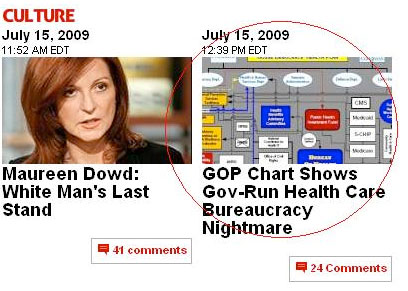 During Your World with Neil Cavuto, Cavuto repeatedly ran the graphic during an interview with Brady about the chart: 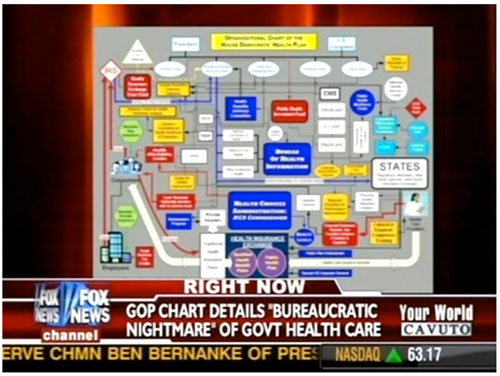 And during Glenn Beck, Beck provided a wall-sized version of the chart and discussed it with Michael Cannon, director of health policy studies at the Cato Institute: 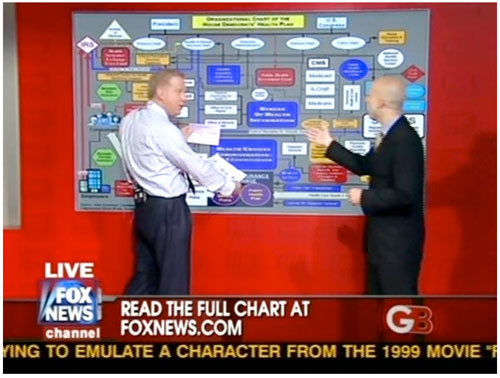 Larry Kudlow also aired the chart on his CNBC program: 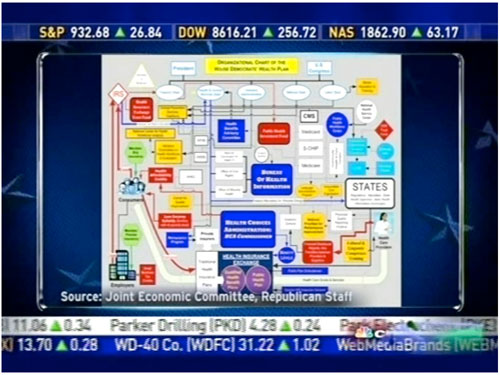