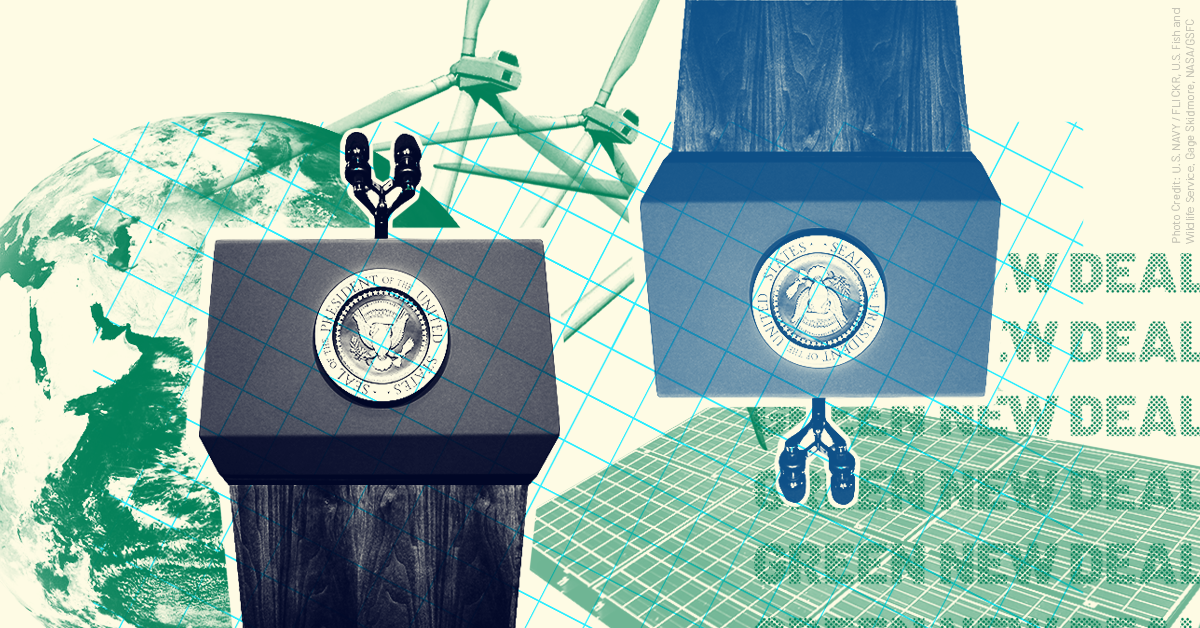 Climate activists and some presidential candidates are calling on the Democratic National Committee to make climate change the sole focus of at least one of its 12 planned presidential primary debates. They argue that a climate-centric debate would help voters learn where the candidates stand on potential solutions, motivate candidates to articulate clear climate action plans, and ensure that debate moderators don't give climate short shrift as they have done in years past.

Environmental and progressive groups including CREDO Action, 350 Action, Greenpeace USA, Sunrise, the U.S. Youth Climate Strike, and Daily Kos are circulating three petitions demanding a climate-focused debate. Together they have garnered more than 155,000 signatures so far.

At least three Democratic presidential candidates have also called for a debate dedicated to climate change. Washington Gov. Jay Inslee was the first, and he launched his own petition. Sen. Kirsten Gillibrand (D-NY) and former Housing and Urban Development Secretary Julián Castro have also come out in support of the idea.

Recent polling data bolsters these entreaties for a climate-focused debate. A CNN poll in late April found that Democratic and Democratic-leaning voters ranked climate change as their top issue: 96% said it was very or somewhat important for a president to support “aggressive action to slow the effects of climate change.” A March Des Moines Register/CNN poll found that 80% of likely Democratic caucus-goers in Iowa would like candidates to spend a lot of time talking about climate change, ranking it alongside health care at the top of issues they want to hear about. And a February poll sponsored by CAP Action Fund, Environmental Defense Action Fund, and the League of Conservation Voters also found that climate change is a top-tier concern for Democratic primary voters and caucus-goers in early voting states, with 84% wanting Democratic presidential candidates to act on the climate crisis and move the country completely to clean energy.

Activists contend that voters' concerns about climate change won't be adequately addressed in the traditional debate format. A debate dedicated to climate change would drive candidates to clarify their climate platforms as well as explain how they will approach specific issues like environmental justice and a Just Transition.

The CREDO petition argues that without a climate-focused debate, “news networks and other debate host organizations won't ask more than one or two token debate questions on climate change.” The U.S. Youth Climate Strike petition makes a similar point: “With the magnitude of the oncoming climate crisis it's no longer sufficient to have a single token environmental question that 2020 candidates get to brush off with a soundbite. We need an entire debate on environmental policies.”

Moderators and panelists at past presidential debates have largely ignored climate change. Media Matters analyzed 20 presidential primary debates held during the 2016 election cycle and found that only 1.5% of the questions were about climate change -- a mere 22 questions out of 1,477. And during the three general election debates between Donald Trump and Hillary Clinton, moderators didn't pose a single climate question.

The few questions that moderators and panelists did ask about climate change during primary debates tended to be shallow ones with no follow-up, resulting in uninformative exchanges. An example of this dynamic came during the November 2015 Democratic primary debate. After extensive discussion of ISIS and terrorism, CBS' John Dickerson asked Sen. Bernie Sanders (I-VT), “In the previous debate you said the greatest threat to national security was climate change. Do you still believe that?” Sanders responded, “Absolutely,” and explained that climate change can exacerbate terrorism. But voters learned nothing new about Sanders' positions or proposals, and the whole setup of the question suggested a false choice between addressing terrorism or the climate crisis. Dickerson and his co-moderators didn't ask any other climate questions at that debate.

In 2019, CNN candidate town halls have demonstrated the public’s interest in climate change

The recent slate of CNN town halls with 2020 presidential contenders has shown the public’s desire for the candidates to discuss climate change and given a glimpse of what viewers could gain from a substantive debate focused on the topic. In 18 of the 20 candidate town halls CNN has held this year, an audience member asked a question about climate change. The moderators asked a follow-up question in only six of these instances.

On the occasions when moderators did push for more specifics, it demonstrated the clarifying role that they can play in helping viewers better understand a candidate's position. For example, after fielding an audience question about the Green New Deal during her CNN town hall on February 18, Sen. Amy Klobuchar (D-MN) responded, “We may not have agreements on exactly how it will work and when we can get it done,” before discussing climate policies she supports such as reentering the Paris accord and restoring Obama-era vehicle mileage standards. Moderator Don Lemon then asked Klobuchar a series of follow-up questions that pushed her to explain why she believes the goals of the Green New Deal are “aspirations” and why “compromises” will be needed.

Former Rep. John Delaney’s (D-MD) March 10 CNN town hall offered another example of how moderators can help voters get a clearer sense of a candidate’s climate stances. An audience member asked Delaney what he and his family have done to reduce their greenhouse gas emissions. Delaney talked about his family’s use of renewables and energy-efficient systems and then discussed his support for a carbon tax and negative-emissions technologies. In a follow-up question, moderator Jake Tapper noted that Delaney had previously disparaged the Green New Deal and asked him to address people who support the resolution, which prompted Delaney to explain that he would instead pursue “realistic” and “bipartisan” solutions and not tie climate action to other policies like universal health care.

Instances like this -- in which a moderator asks specific, substantive follow-up questions about climate change policy -- have been extremely rare in past years. This year, voters need to hear much more in-depth discussion of climate solutions.

The science of climate change was clear during the 2016 election season, but now the threat is even more immediate and urgent, especially as the last year has brought us record extreme weather events, alarming climate reports from both the United Nations and the U.S. government, continued rollbacks of climate protections from the Trump administration, and a burgeoning youth movement demanding action. Moderators should ask about climate policy at every debate and follow up to make sure candidates don't skate by with superficial answers. On top of that, hosting a climate-focused debate would give voters the best opportunity to hear a substantive discussion of how candidates plan to lead on the existential crisis of our time.