Sunday morning political shows’ coverage of climate change dropped markedly in April, hitting a three-month low. The five major Sunday shows aired a combined total of just two segments in April that included any substantive discussion of climate change, down from seven in February and six in March.

Both of the April segments that discussed climate change came during interviews with Democratic presidential candidates, following a trend first in evidence in March. Rep. Tim Ryan (D-OH), who announced his presidential candidacy on April 4, talked about climate action during his appearance on the April 14 episode of ABC’s This Week with George Stephanopoulos. Washington Gov. Jay Inslee, whose campaign is centered on fighting climate change, brought up the topic numerous times during his interview on the April 14 episode of NBC’s Meet the Press with host Chuck Todd.

Sen. Sheldon Whitehouse (D-RI), who is pushing the Sunday shows to offer more and better coverage of climate change, released a scorecard on the shows' April performance: 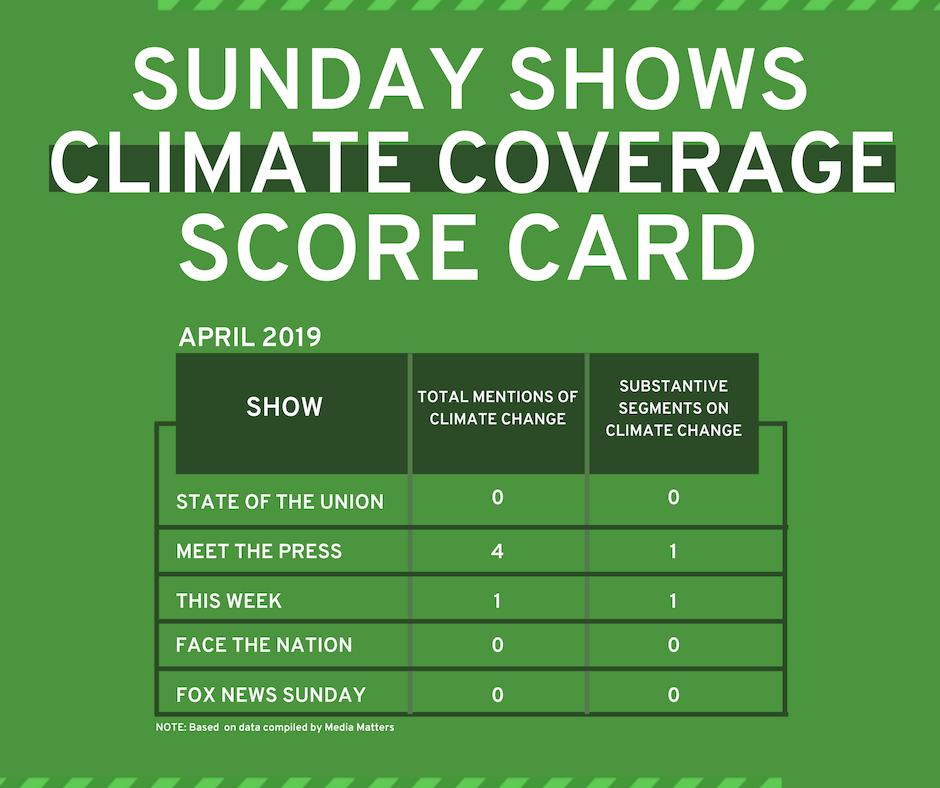 The two climate discussions that did air were not particularly informative for viewers. The hosts narrowly framed or downplayed the issue of climate change and did not provide opportunities for the guests to discuss it in depth.

During Ryan's interview on This Week, host Stephanopoulos brought up the Green New Deal only to ask whether it and other proposals might hurt Democrats politically.

STEPHANOPOULOS: You support the Green New Deal. You support “Medicare for All.” We heard the Senate Republican leader this week, Mitch McConnell, say they're going to make the election a referendum on socialism. Are you worried that policies like that will make Democrats vulnerable?

Ryan took the opportunity to note that climate action can create manufacturing jobs, but the exchange on the Green New Deal and climate policy was brief.

Stephanopoulos’ question perfectly encapsulated corporate media’s tendency to ignore whether climate proposals, such as the Green New Deal, contain effective solutions and instead focus on the potential political ramifications for Democrats and Republicans. Media Matters has repeatedly documented the trend of Sunday show hosts presenting climate policy through this type of narrow political lens.

On Meet the Press, before his interview with Inslee began, host Todd noted that the governor had made climate change the focus of his campaign, but Todd started the interview with four questions about immigration. At two points during the immigration discussion, Inslee pointed out that the climate crisis is a contributing factor, explaining that he would “attack climate change because a lot of these people who are coming north are climate refugees.” But Todd pivoted the immigration conversation away from climate change. Eventually, he engaged Inslee in conversation about carbon pricing and nuclear energy, but he then asked the governor whether he was merely “running for president to prove a point” and “force” Democrats to take climate change seriously.

It's alarming that these were the only Sunday show climate discussions during a month when presidential candidates talked about climate and energy plans, voters made climate change a top-tier issue, and climate protests made the news. As climate change becomes a more pressing political issue than ever, we should be seeing coverage increase and improve, not decrease and deteriorate.