Bob Schieffer allowed John McCain to criticize President Obama's response to recent events in Iran but did not note any of the questionable comments McCain has made regarding Iran.

During the June 21 edition of CBS' Face the Nation, host Bob Schieffer interviewed Sen. John McCain and discussed his criticism of President Obama's response to recent events in Iran. But at no point during the interview did Schieffer mention any of the questionable comments McCain has made regarding Iran, such as his 2007 response when to a question about when the United States would use military force against Iran: “You know that old Beach Boys song 'Bomb Iran' -- 'bomb, bomb, bomb.' ”

During the interview, McCain compared the ongoing protests in Iran to various historical events, including the American Revolution and the Greek revolution of 1823. He said that he'd “like to see the president be stronger than he has been although I appreciate the comments that he made yesterday.” He continued: “I think we ought to have America lead. When you look at the statements by [French] President [Nicolas] Sarkozy, [German] Chancellor [Angela] Merkel and [U.K.] Prime Minister [Gordon] Brown have been much stronger.” He later added: “I think the president ought to expand this issue beyond just those demonstrators although certainly our hearts and our sympathies goes [sic] out to them and their families.”

However, Schieffer did not mention any of the questionable comments McCain has made regarding Iran. For example: 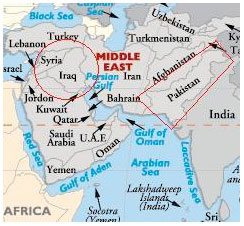