In a June 26 CBSNews.com article reporting that the Environmental Protection Agency “may have suppressed” an internal report on climate change, senior correspondent Declan McCullagh uncritically reported the document's false claim that, in the article's words, “global temperatures have declined for 11 years.” McCullagh identified that claim as one of “a number of recent developments [one of the document's authors, EPA researcher Alan Carlin] said the EPA did not consider” before it submitted a key finding that could lead to EPA regulation of carbon dioxide. In fact, the claim that “global temperatures have declined for 11 years” is simply not true. Annual global average temperatures have both risen and fallen over the past 11 years, and while there have been some relatively cooler years during that period -- including a decline in each of the past three relative to the year before -- climate scientists reject the idea that those temperatures are any indication that global warming is slowing or does not exist. Scientists have identified a long-term warming trend spanning several decades that is independent from the normal climate variability -- which includes relatively short-term changes in climate due to events like El Niño and La Niña -- to which they attribute the recent relatively cooler temperatures.

In a February 11 Guardian op-ed, Vicky Pope, the head of climate change advice at the U.K. Met Office Hadley Centre, wrote that claims about the pace of global warming based only on developments in the past 10 years or in the 1990s are not valid, “since natural variations always occur on this timescale.” She continued, “1998 was a record-breaking warm year as long-term man-made warming combined with a naturally occurring strong El Niño. In contrast, 2008 was slightly cooler than previous years partly because of a La Niña. Despite this, it was still the 10th warmest on record.” According to the Met Office, “Over the last ten years, global temperatures have warmed more slowly than the long-term trend. But this does not mean that global warming has slowed down or even stopped. It is entirely consistent with our understanding of natural fluctuations of the climate within a trend of continued long-term warming."

As this graph of annual global average temperatures from the U.K. Met Office Hadley Centre shows, the claim in the internal EPA document that, in the words of CBS, “global temperatures have declined for 11 years” is simply not true: 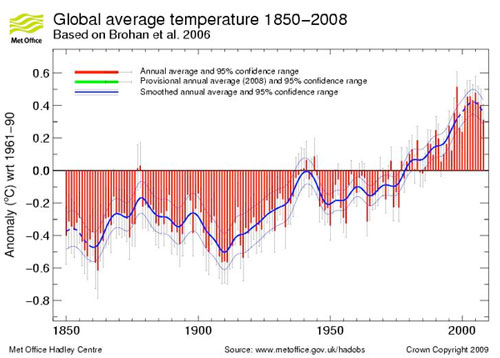 According to the Met Office website, the World Meteorological Organization “requires the calculation of averages for consecutive periods of 30 years,” which was chosen “as a period long enough to eliminate year-to-year variations.”

Moreover, McCullagh's article did not provide scientists' assessments of the validity of the EPA document's scientific claims. Rather, he quoted Competitive Enterprise Institute (CEI) general counsel Sam Kazman and Reps. Joe Barton (R-TX) and James Sensenbrenner (R-WI). McCullagh noted that the CEI released the allegedly “suppressed” document and “has been skeptical of new laws or regulations relating to global warming,” while Sensenbrenner was quoted as saying “the repression of this important study casts doubts on EPA's finding, and frankly, on other analysis EPA has conducted on climate issues.”

By contrast, Gavin Schmidt, a climate modeler at the NASA Goddard Institute for Space Studies, wrote in a June 26 RealClimate.org post that in reading the internal EPA document, "[o]ne can see a number of basic flaws [in its main points]; the complete lack of appreciation of the importance of natural variability on short time scales, the common but erroneous belief that any attribution of past climate change to solar or other forcing means that CO2 has no radiative effect, and a hopeless lack of familiarity of the basic science of detection and attribution." From Schmidt's post:

Some parts of the blogosphere, headed up by CEI ("CO2: They call it pollution, we call it life!"), are all a-twitter over an apparently “suppressed” document that supposedly undermines the EPA Endangerment finding about human emissions of carbon dioxide and a basket of other greenhouse gases. Well a draft of this “suppressed” document has been released and we can now all read this allegedly devastating critique of the EPA science. Let's take a look...

Their [the document authors'] main points are nicely summarised thus: a) the science is so rapidly evolving that IPCC [International Panel on Climate Change] (2007) and CCSP (2009) reports are already out of date, b) the globe is cooling!, c) the consensus on hurricane/global warming connections has moved from uncertain to ambiguous, d) Greenland is not losing mass, no sirree..., e) the recession will save us!, f) water vapour feedback is negative!, and g) Scafetta and West's statistical fit of temperature to an obsolete solar forcing curve means that all other detection and attribution work is wrong. From this “evidence” , they then claim that all variations in climate are internal variability, except for the warming trend which is caused by the sun, oh and by the way the globe is cooling.

One can see a number of basic flaws here; the complete lack of appreciation of the importance of natural variability on short time scales, the common but erroneous belief that any attribution of past climate change to solar or other forcing means that CO2 has no radiative effect, and a hopeless lack of familiarity of the basic science of detection and attribution.

But it gets worse, what solid peer reviewed science do they cite for support? A heavily-criticised blog posting showing that there are bi-decadal periods in climate data and that this proves it was the sun wot done it. The work of an award-winning astrologer (one Theodor Landscheidt, who also thought that the rise of Hilter and Stalin were due to cosmic cycles), a classic Courtillot paper we've discussed before, the aforementioned FoS [Friends of Science] web page, another web page run by Doug Hoyt, a paper by Garth Paltridge reporting on artifacts in the NCEP reanalysis of water vapour that are in contradiction to every other reanalysis, direct observations and satellite data, a complete reprint of another un-peer reviewed paper by William Gray, a nonsense paper by Miskolczi etc. etc. I'm not quite sure how this is supposed to compete with the four rounds of international scientific and governmental review of the IPCC or the rounds of review of the CCSP reports....

They don't even notice the contradictions in their own cites. For instance, they show a figure that demonstrates that galactic cosmic ray and solar trends are non-existent from 1957 on, and yet cheerfully quote Scafetta and West who claim that almost all of the recent trend is solar driven! They claim that climate sensitivity is very small while failing to realise that this implies that solar variability can't have any effect either. They claim that GCM simulations produced trends over the twentieth century of 1.6 to 3.74ºC - which is simply (and bizarrely) wrong (though with all due respect, that one seems to come directly from Mr. Gregory). Even more curious, Carlin appears to be a big fan of geo-engineering, but how this squares with his apparent belief that we know nothing about what drives climate, is puzzling. A sine qua non of geo-engineering is that we need models to be able to predict what is likely to happen, and if you think they are all wrong, how could you have any faith that you could effectively manage a geo-engineering approach?

Finally, they end up with the oddest claim in the submission: That because human welfare has increased over the twentieth century at a time when CO2 was increasing, this somehow implies that no amount of CO2 increases can ever cause a danger to human society. This is just boneheadly stupid.

The Environmental Protection Agency may have suppressed an internal report that was skeptical of claims about global warming, including whether carbon dioxide must be strictly regulated by the federal government, according to a series of newly disclosed e-mail messages.

Less than two weeks before the agency formally submitted its pro-regulation recommendation to the White House, an EPA center director quashed a 98-page report that warned against making hasty “decisions based on a scientific hypothesis that does not appear to explain most of the available data.”

After reviewing the scientific literature that the EPA is relying on, Carlin said, he concluded that it was at least three years out of date and did not reflect the latest research. “My personal view is that there is not currently any reason to regulate (carbon dioxide),” he said. “There may be in the future. But global temperatures are roughly where they were in the mid-20th century. They're not going up, and if anything they're going down.”

Carlin's report listed a number of recent developments he said the EPA did not consider, including that global temperatures have declined for 11 years; that new research predicts Atlantic hurricanes will be unaffected; that there's “little evidence” that Greenland is shedding ice at expected levels; and that solar radiation has the largest single effect on the earth's temperature.