In an interview with Axios, President Donald Trump claimed that his administration is examining removing the right to citizenship “for babies of non-citizens and unauthorized immigrants born on U.S. soil” that is guaranteed under the Constitution’s 14th Amendment “with an executive order.” Numerous mainstream and right-wing media outlets quickly and uncritically parroted the president’s comment, spreading the claim without noting, for example, that the president cannot change the Constitution with an executive order, or that the Supreme Court has held that the United States grants citizenship to the children of noncitizens. Trump’s proposal would face steep legal challenges, according to constitutional law experts.

Axios: “President Trump plans to sign an executive order that would remove the right to citizenship for babies of non-citizens and unauthorized immigrants born on U.S. soil.” In an “exclusive” interview, the president told Axios’ Jonathan Swan and Jim VandeHei that he would seek to “end” the “ridiculous” Constitutional amendment that guarantees citizenship to “all persons born or naturalized in the United States.” From Axios’ October 30 report:

President Trump plans to sign an executive order that would remove the right to citizenship for babies of non-citizens and unauthorized immigrants born on U.S. soil, he said yesterday in an exclusive interview for “Axios on HBO,” a new four-part documentary news series debuting on HBO this Sunday at 6:30 p.m. ET/PT.

Why it matters: This would be the most dramatic move yet in Trump's hardline immigration campaign, this time targeting “anchor babies” and “chain migration.” And it will set off another stand-off with the courts, as Trump’s power to do this through executive action is debatable to say the least.

But some conservatives have argued that the 14th Amendment was only intended to provide citizenship to children born in the U.S. to lawful permanent residents — not to unauthorized immigrants or those on temporary visas. [Axios, 10/30/18] 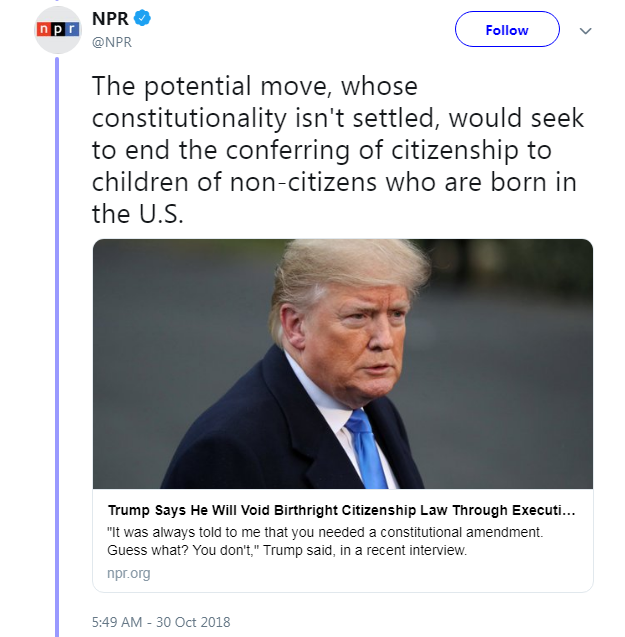 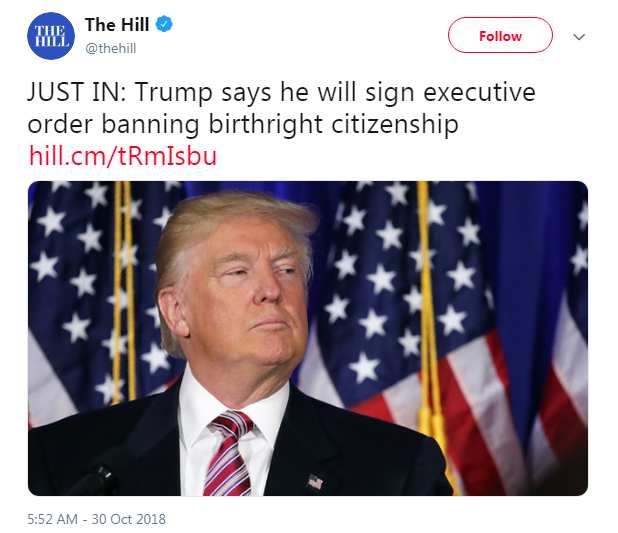 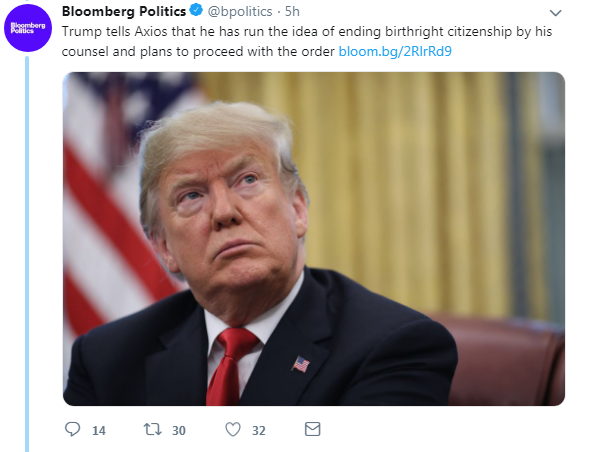 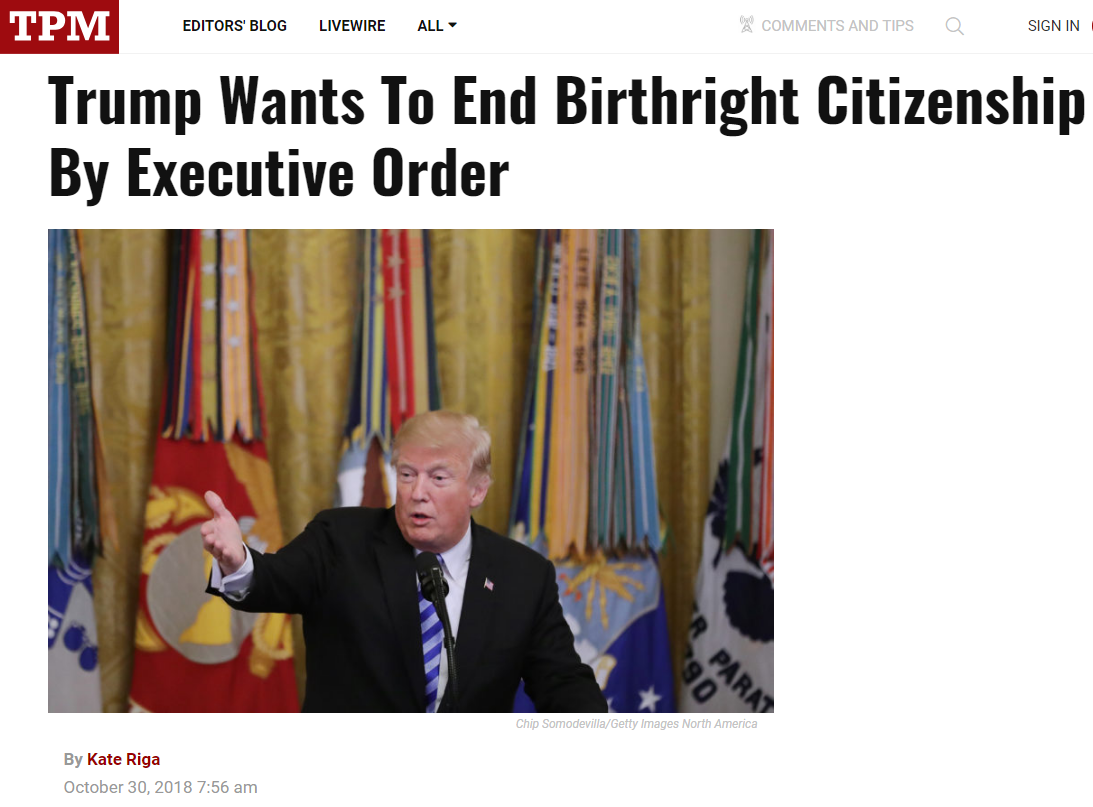 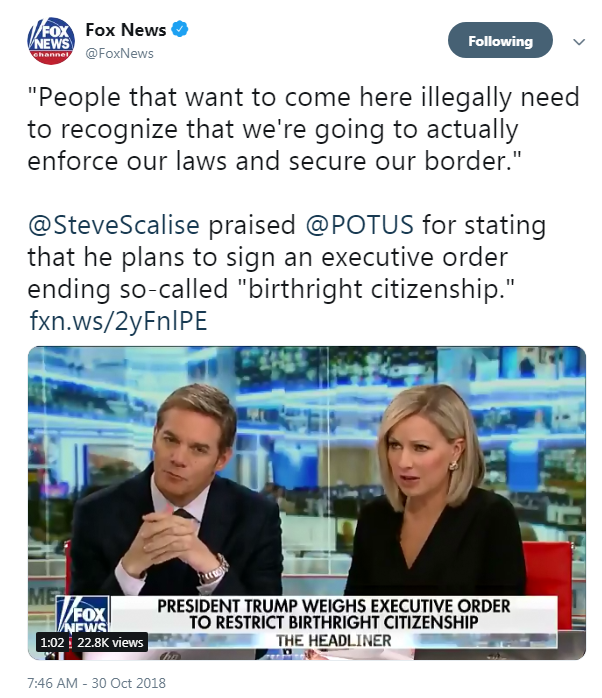 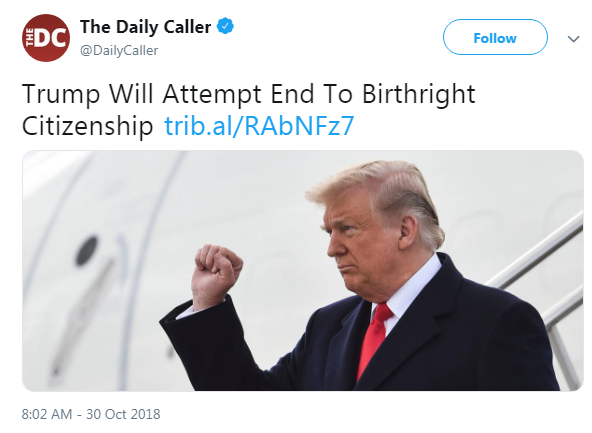 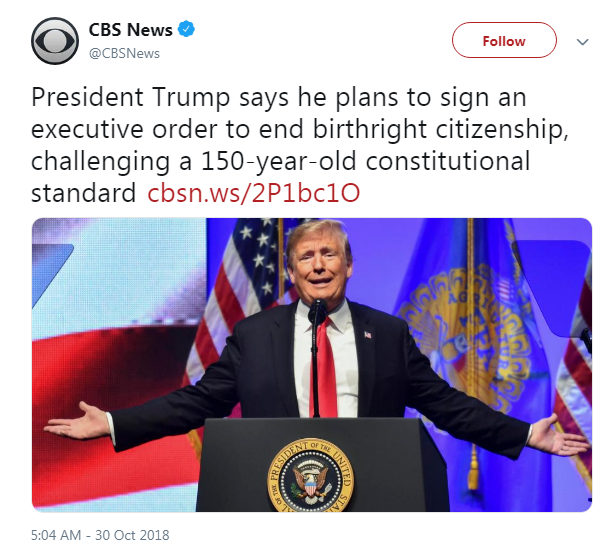 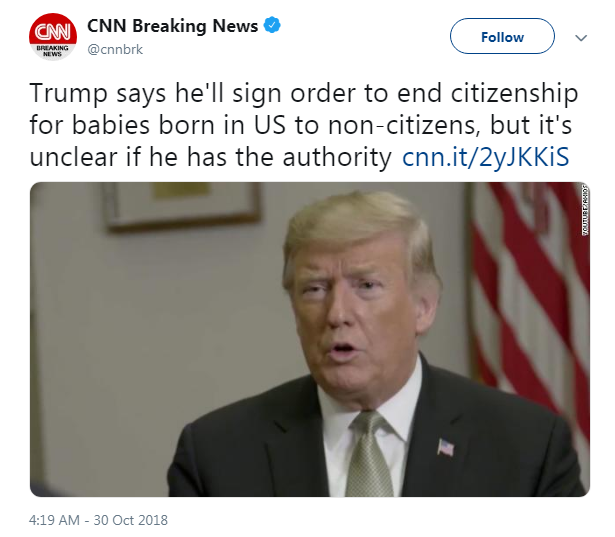 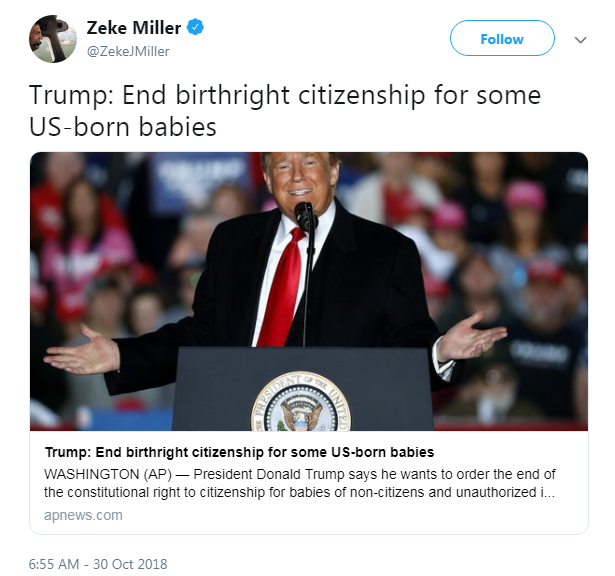 Experts and responsible commentators push back hard on the misinformation

If the 14th Amendment’s guarantee of birthright citizenship could be wiped out with the stroke of Trump’s pen, the whole U.S. Constitution could be erased that way. There’s no limit to that dictatorial claim over all our rights. https://t.co/hfFfsDOAJL

At this point, Trump is throwing a bunch of nationalist immigration policies at a wall and seeing what will stick. We should see this for what it is, a cheap attempt to score political points before next week. Trump may be president, but he isn’t above the 14th Amendment. https://t.co/eacwiUC4sM

the 14th amendment was written to guarantee citizenship to formerly enslaved people, who were born in the united states but lacked legal personhood. the idea that the logic of the amendment is at all ambiguous is ridiculous.

The idea that the original meaning of the 14th Amendment was designed to exclude unauthorized immigrants seems to me to founder on the reality that there were no restrictions whatsoever on immigration to the US at the time.

You guys know that ending birthright citizenship was part of his platform, right? Dating all the way back to 2015. https://t.co/sddJqiJyLc pic.twitter.com/bBseK2BBsO

CNBC: “Since at least 1898, the Supreme Court has held that it grants citizenship to children of noncitizens.” According to CNBC, in the 1898 United States v. Wong Kim Ark case, the Supreme Court “ruled that a child of Chinese parents who was born in San Francisco was a U.S. citizen by virtue of his California birth.” From CNBC’s October 30 article:

Trump is taking on the 14th Amendment, passed in 1868 to grant citizenship to former slaves. It's one of the most heavily litigated provisions of the Constitution. Since at least 1898, the Supreme Court has held that it grants citizenship to children of noncitizens.

Trump's action “is a deeply unethical political stunt that will fail in the courts because it is unconstitutional,” Beth Lyon, clinical professor of law and director of Cornell Law School's Farmworker Legal Assistance Clinic, said in a statement to CNBC.

In that 19th-century case, United States v. Wong Kim Ark, the court ruled that a child of Chinese parents who was born in San Francisco was a U.S. citizen by virtue of his California birth.

“In the forefront both of the Fourteenth Amendment of the Constitution and of the Civil Rights Act of 1866, the fundamental principle of citizenship by birth within the dominion was reaffirmed in the most explicit and comprehensive terms,” the court wrote at the time. [CNBC, 10/30/18]

President Trump gave away the game last week. Confronted with one of the largest mass-assassination attempts in U.S. history, Trump bemoaned the fact that it was taking the focus away from politics at a time when Republicans were supposedly ascendant.

And more specifically, it was taking the focus off his closing campaign message of choice: immigration and the “invasion” of a migrant caravan headed to the U.S.-Mexico border.

That and other context is vital when considering Trump’s claim to be planning to revoke birthright citizenship via executive action. There is quite frankly very little reason to believe this is a serious proposal — either legally or practically speaking — and it should be viewed and covered accordingly. There is abundant reason to believe this is primarily a ploy to fire up his base on the eve of an election.

What really calls into question the supposed gambit’s prospects is the method: executive action. Executive actions are permitted to interpret existing law, not make new ones. It would be one thing for Congress to attempt to revoke birthright citizenship; Trump trying to do it via executive action adds another huge hurdle for passing legal muster, beyond the already high hurdle of effectively undoing a Constitutional amendment.

“There’s an active academic debate over whether mere legislation could change it with respect to illegal immigrants and tourists,” the Cato Institute’s Ilya Shapiro told The Post’s Robert Barnes, “but regardless it’s not something that can be done by executive action alone.” [The Washington Post, 10/30/18]