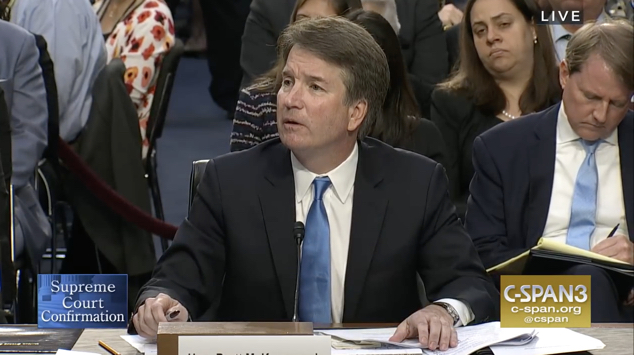 During the September 9 broadcast of This Week, which airs on ABC, Kavanaugh was mentioned only in passing by a guest who noted that Sen. Ben Sasse (R-NE) criticized Congress during the hearings, which took place the previous week.

CBS’ Face the Nation also offered lackluster coverage during its September 9 broadcast. Vice President Mike Pence used an appearance on the show to push pro-Kavanaugh talking points and wasn’t challenged by host Margaret Brennan, who instead asked Pence whether he would end up being the tie-breaking vote to confirm Kavanaugh. The panel discussion on Kavanaugh was a horse race and optics conversation. Brennan opened the discussion of the hearings by asking a guest, “Who was the 2020 candidate trying out in these Kavanaugh hearings this week?” (A guest also briefly mentioned Kavanaugh while she talked about Sen. Ted Cruz [R-TX], who sits on the Senate Judiciary Committee.)

The coverage on these two shows missed several critical moments from the hearings where questioners caught Kavanaugh off guard. In some cases, he either appeared to give false testimony or it was exposed that he had given false testimony during 2004 and 2006 appearances before Congress.

The exchanges receiving the most widespread attention occurred between Sen. Patrick Leahy (D-VT) and Kavanaugh over whether the nominee had knowledge that documents he received regarding judicial nominations while working in the White House counsel’s office during the Bush administration had been stolen by a GOP operative from Leahy’s office and from other Democrats in Congress. Kavanaugh, rattled by Leahy’s questioning, denied knowing at the time the information he received was stolen. Even during the second day of questioning, when Leahy showed Kavanaugh ill-gotten emails he had received that were marked confidential, including one email with the subject line “spying,” Kavanaugh repeated his denial.

On September 7, Lisa Graves, a Democratic staffer who had some of her emails stolen during the scandal, published a widely circulated article that suggested Kavanaugh could be impeached from the federal judiciary for making false statements about receiving the stolen material. Of the Sunday political talk shows, only CNN’s State of the Union covered the stolen documents. Fox Broadcasting Co.’s Fox News Sunday and NBC’s Meet the Press did not cover the stolen documents, but they did provide other substantive coverage of the hearings.