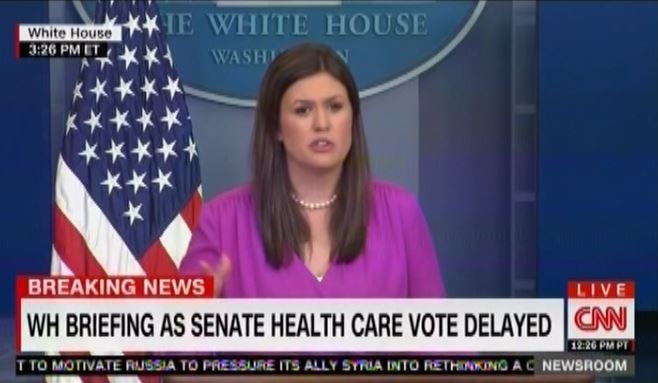 Deputy press secretary Sarah Huckabee Sanders used a rare on-camera press briefing to lash out at CNN, claiming that in light of the network’s retraction of a story, “we have gone to a place where ... the media can't be trusted to report the news.” Aided by the pro-Trump media outlets in the room, Sanders sought to further the administration's effort to delegitimize the mainstream press.

Since late last week, CNN has published, investigated, and retracted a story on ties between Russia and an adviser to President Donald Trump; three journalists involved in the story have resigned. Trump and the pro-Trump media used the incident to buttress their claims that CNN deliberately produces “FAKE NEWS to undermine the president.” That effort is now being echoed from the podium of the briefing room.

The White House press office teamed up with reporters from two of the president’s staunch media allies to stage an attack on a major press outlet that has provided critical coverage of Trump. Briefers have all but openly discarded the notion that they are supposed to be providing information to reporters and, through them, the American people. Instead, the purpose of the White House press briefings is to aid in the effort to undermine the media’s credibility, shut critical reporters up and make an example of them.

This was a deliberate, well-choreographed hit by the administration -- Sanders went into the room knowing she wanted to go after CNN, and she had a strategy to get there. After a week of the White House very deliberately refusing to allow the briefings to be videotaped, the cameras were allowed back in the room today. Sanders called on Trump propaganda outlet Breitbart.com’s reporter, presumably knowing that the website has been pushing the CNN story and could be counted on for a softball question. Breitbart’s correspondent basically asked, “Will you please attack CNN,” and Sanders obliged with a well-rehearsed screed against CNN and the rest of the press.

During her response, Sanders said there is a “constant barrage of fake news directed at this president,” and she urged “everybody across the country to take a look” at stunt videographer James O’Keefe’s hit on CNN, adding the caveat that she doesn’t know “whether it’s accurate or not.” She went on to scold outlets for using anonymous sources about what she termed the “Russia-Trump hoax.”

Sanders was rebuked from the floor by White House reporter Brian Karem, who interrupted the proceedings to criticize her for being “inflammatory” toward reporters who are “just trying to do their job.”

Later in the briefing, Sanders called on a reporter from Trump advocate Laura Ingraham’s LifeZette, who asked if the media “should go back and look at anonymously sourced stories on Russia and Trump and, you know, maybe start a review process and retract where necessary.” Sanders replied, “I think that would be a great idea.”

Roughly a third of the 17 minutes of question time provided by Sanders was devoted to hammering CNN.

I warned in January of the danger of the White House’s plan to flood the briefings with sycophants and propagandists and its effort to single out individual reporters and crush them. Brian Karem has had enough. Will the rest of the press corps respond, or will they let the administration pick them off one by one?

Does this feel like America? Where the White House takes q's from conservatives, then openly trashes the news media in the briefing room.