In the days leading up to the November 7 gubernatorial election in Virginia, Breitbart.com and Breitbart radio were increasingly touting Republican candidate Ed Gillespie’s turn toward “the nationalist-populist base.” Breitbart staffers and Executive Chairman Stephen Bannon argued that Gillespie’s embrace of “the Trump agenda” -- through issues such as linking undocumented immigrants to the violent gang MS-13 and keeping Confederate monuments -- were the reason for his “momentum.” However, as soon as the race was called for Democratic Lt. Gov. Ralph Northam, Breitbart quickly changed tack, labeling Gillespie an “establishment” “Republican swamp thing,” and declaring that he was “scarcely a MAGA candidate.” Here’s how Breitbart covered Gillespie's embrace of Trumpism … until he lost.

Virginia’s Confederate history is again at the center of the State’s electoral politics. Republican Gubernatorial nominee Ed Gillespie vowed to preserve monuments in a new ad for an election CNN is calling a “culture war.” [Breitbart, 10/26/17]

Gillespie’s campaign took a populist turn when he said that if elected governor, Gillespie would tackle the problem of MS-13 gangs in Northern Virginia and sign legislation to ban sanctuary cities. Democrats argued that banning sanctuary cities and protecting local Virginia communities from dangerous gangs such as MS-13 amount to racial stereotyping of immigrant communities. [Breitbart, 10/31/17]

Nov. 4. Breitbart: Gillespie gaining momentum due to “his embrace of Virginia’s populist energy.”

[Corey] Stewart, who lost to Ed Gillespie by the narrowest of margin’s (sic) in June’s GOP primary, thought his one-time opponent has done well for himself by making illegal immigration-fueled crime the central issue of his campaign. “As he’s moved to the right,” Stewart told Breitbart News of Gillespie, “as he’s embraced the issues of protecting historical monuments and cracking down on illegal immigration, I don’t think it’s a coincidence his poll numbers have improved dramatically.”

Stewart was similarly optimistic about the effect of the momentum Gillespie has stirred up with his embrace of Virginia’s populist energy. “A Gillespie win or a narrow loss means there will be a lot more national money and resources going into Virginia in 2018,” he told Breitbart News. [Breitbart, 11/4/17]

Nov 5. Breitbart chief Bannon to The New York Times: Gillespie is “rallying around the Trump agenda.” This is “Trumpism without Trump.”

For all the talk of Republican divisions, the party of President Trump has largely rallied around Mr. Gillespie’s confrontational candidacy in what is probably the most consequential election since Mr. Trump took office. While Mr. Gillespie kept the president out of Virginia, the only Southern state Mr. Trump lost, he has run a campaign that gave Mr. Trump much to admire.

“He’s closed an enthusiasm gap by rallying around the Trump agenda,” said Stephen K. Bannon, the president’s former strategist. “And I think the big lesson for Tuesday is that, in Gillespie’s case, Trumpism without Trump can show the way forward. If that’s the case, Democrats better be very, very worried.” [The New York Times, 11/5/17]

Nov. 5. Breitbart: Gillespie has “tapped into” issues that led to “Trump’s nationwide victory” and “a Gillespie victory would be a vindication of the principles President Trump ran on.”

In recent days, Gillespie has tapped into several of the issues that led to Republican victories in 2016, most notably Donald Trump’s nationwide victory with more Electoral College votes than any Republican since 1988.

Gillespie has come out swinging on immigration, hitting Northam hard for being soft on crime with an ad, “Left Wing Ralph Northam,” that explained, “MS-13 is a menace, yet Ralph Northam voted in favor of sanctuary cities that let dangerous illegal immigrants back on the street, increasing the threat of MS-13.”

Pushing back against the Far Left, Gillespie has also rallied to the defense of Virginia’s historical figures and monuments. Northam has said all of these statues and monuments must come down. In late October, a church in Alexandria, Virginia, where George Washington once attended has removed its plaque honoring America’s first president, showing how far that political movement has gone.

A Gillespie victory would be a vindication of the principles President Trump ran on and a significant boost to the president’s agenda, potentially setting the stage to oust Tim Kaine from the Senate in 2018, and for Virginia to swing Republican in the 2020 national election for president. [Breitbart, 11/5/17]

Nov. 6. Breitbart Radio: Trump voters are “coming home” in Virginia because Gillespie is now “in harmony with the president’s positions” and is running on “the Trump agenda.”

STEPHEN BANNON (HOST): What is exactly happening that the Trump voters who didn’t have a lot of interest in Gillespie in the primary, why are they coming home? Because Trump has not actually campaigned in Virginia.

KEN KLUKOWSKI: That’s right. A Republican victory in Virginia would be a vindication of President Trump's agenda. Gillespie's focus in the campaign’s final couple of weeks on immigration, protecting historical monuments, and individual rights is in harmony with the president’s positions --

BANNON: Yeah, this is the Trump agenda right?

KLUKOWSKI: That's exactly right. and he focused -- and Gillespie focused, on those positions and as he has, he's come from behind to potentially take the lead in the final days here.

BANNON: What do you think about -- the whole thing has been sanctuary cities, it’s been MS-13, it’s been the Confederate monuments. Why did this all come down to kind of the Trump issues when you know Northam and these guys didn’t want to talk about it at all?

KLUKOWSKI: It shows that in a swing state like the Commonwealth of Virginia which has trended very liberal over the past several elections by the growth of the federal government just flooding into Northern Virginia, that these are winning issues. The bottom line is these are winning issues. It turns out the vote. There are people who are willing to switch their vote and vote for you, if you will champion the president’s agenda.

ALEX MARLOW: This is something that I believe is a sentiment that a lot of us have voiced, you in particular, that this is -- the Trump agenda is king, and the Trump value system is shockingly cogent.

Bannon added, “it will be because of the underlying message of Corey Stewart and what he believes in, and the Trump voters in Virginia who are gonna turn out!”

Gillespie initially trailed in the polls to Northam. However, in the last few weeks, Gillespie tied, and in some polls beat, Northam by making MS-13 a focal point of his campaign. Gillespie also promised to sign legislation that would ban sanctuary cities in the Commonwealth of Virginia, which put so much pressure on his Democratic opponent that Northam flip-flopped in favor of banning sanctuary cities. [Breitbart, 11/6/17]

Nov. 6. Breitbart: Bannon said Trump voters, “the hobbits,” are “coming out now to embrace the Trump agenda as Gillespie has now articulated it.”

“You had a guy like Gillespie who was essentially eight, ten points down four weeks ago, when the Gillespie campaign starts to really embrace the Trump agenda, and part of that is sanctuary cities – deporting guys like these gangs, MS-13 – to really get back and talk about our sovereignty when it deals with illegal immigration and legal immigration. And all of a sudden, Gillespie caught fire because he’s embracing Trumpism.”

“I think it’s pretty straightforward,” said Bannon. “If you look in Virginia, you see the grassroots are fired up. They’re coming out now to embrace the Trump agenda as Gillespie has now articulated it. Well, if the grassroots show up, we win. Joel just talked about this fervor that went around these seven stops on Super Sunday in 2016 that really catapulted Trump to the White House. The grassroots are out there. People come to Minnesota literally to an airplane hangar, 20,000 people on a very cold Sunday when pro football is on, to see Trump. Three thousand inside the hangar kind of warm, 17,000 freezing out on the sides. They’ll do that because the grassroots, the hobbits, they want to take their country back. They don’t want to lose their country.” [Breitbart, 11/6/17]

STEPHEN BANNON (HOST): Jill, one thing, this ticket was down 8 to 10 points four weeks ago, then you started to come to the forefront, and I think a lot of people that are Trump voters and believe in the Trump agenda, who kind of got sideways with this thing in the primary … I think they realized what the stakes were. As you went around barnstorming around the state and we kept showing on Breitbart, just putting up the stories about you, putting up what’s going on, people realized that hey, the Trump agenda is on the ballot in Virginia, and it’s very important for the Trump agenda to win. [SiriusXM Patriot, Breitbart News Daily, 11/7/17]

COREY STEWART: What happened in 2016, was that an aberration, was it a one time thing? Or was it the beginning of a big movement that’s bigger than Trump himself, bigger than the presidency? And that’s really what is at stake here in Virginia. [SiriusXM Patriot, Breitbart News Daily, 11/7/17]

Pre-defeat Nov. 7. Breitbart: Gillespie’s rise in the polls is due to him “mounting a populist campaign to attract President Donald Trump’s nationalist-populist base.”

Gillespie rose in the polls by mounting a populist campaign to attract President Donald Trump’s nationalist-populist base. He campaigned on combatting MS-13, banning sanctuary cities, and pledging to protect Virginia’s historical figures and monuments. [Breitbart, 11/7/17] 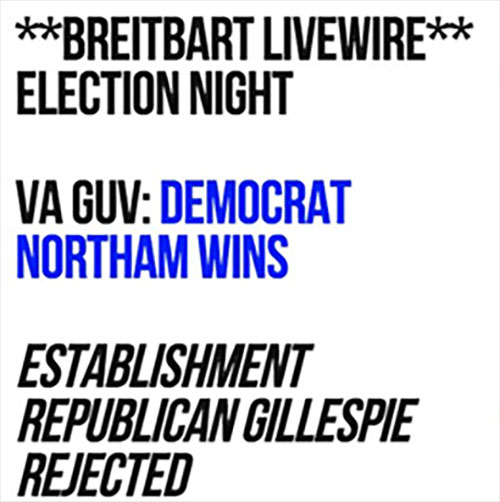 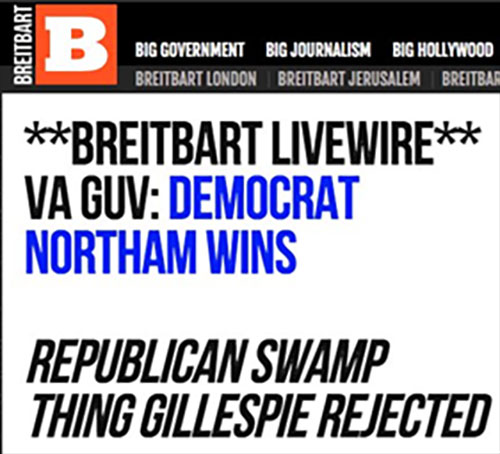 Gillespie, as Trump noted late on Tuesday night, was scarcely a MAGA candidate. And the operation the Virginia GOP put down in the state was nowhere near the Obama for America-style blitzkrieg campaign they needed to win.

More authentic MAGA candidates like Jill Vogel received a better reception and a higher percentage of the vote than Gillespie — and why Gillespie probably dragged her numbers down further than where they would have been. [Breitbart, 11/7/16]

Nov. 8: Breitbart moves on from the story and instead relives the 2016 election. The morning after Election Day, Breitbart.com’s homepage prominently featured “the untold story of Breitbart’s [2016] election night.” The story about “Swamp Thing” Gillespie’s defeat was relegated to the bottom right corner of the page -- along with Trump’s false claim that Gillespie “did not embrace me or what I stand for.” 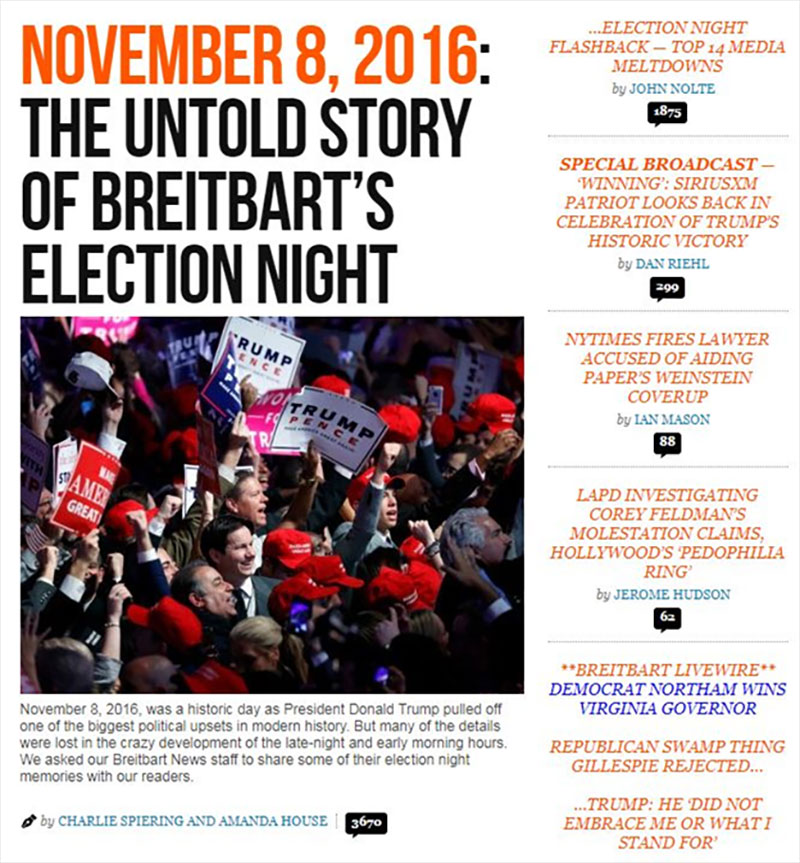