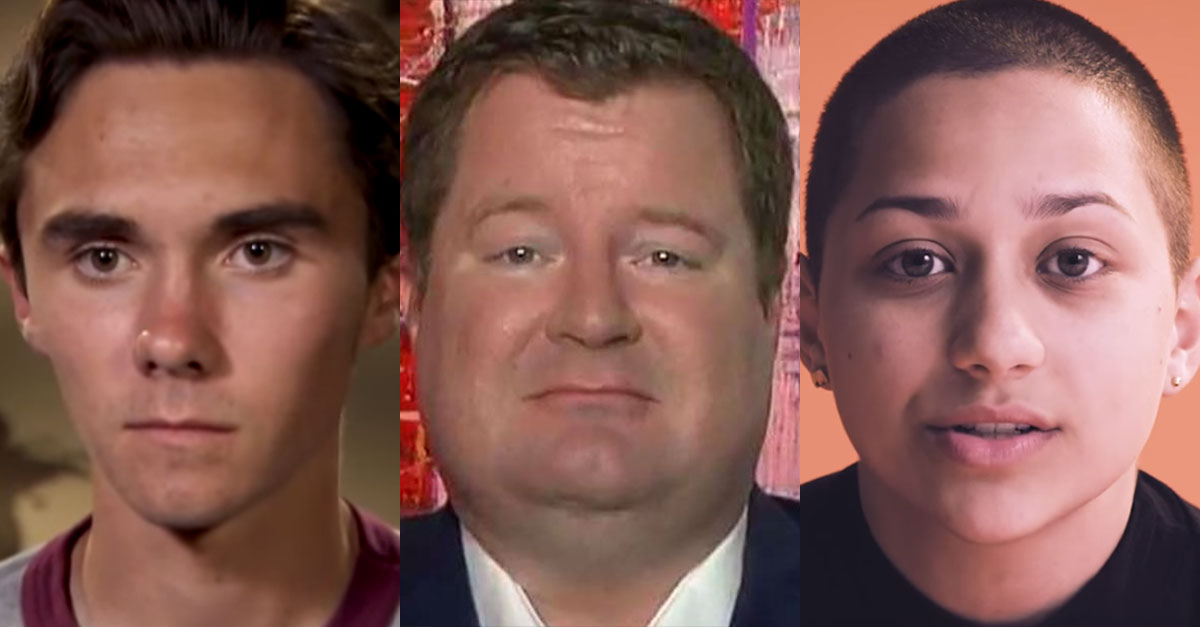 Erick Erickson wanted his Twitter followers to know that the article he was circulating -- which suggested the Parkland survivor-turned gun violence prevention activist David Hogg hadn’t been present during February’s mass shooting at Marjory Stoneman Douglas High School -- was no conspiracy theory. “David Hogg contradicts himself in two separate interviews about whether he was at school during the shooting. And no, this isn’t a fake news Gateway Pundit bs story,” Erickson tweeted last night, referencing the pro-Trump website notorious for propelling hoaxes. The decision by Erickson, the right-wing commentator once deemed “the most powerful conservative in America,” to publicly stand behind the credibility of the Redstate article in question backfired rather spectacularly as it became clear that it was, in fact, a “bs story.”

Contributor Sarah Rumpf's article originally argued that “Hogg’s statements in a new CBS documentary about the shooting is casting doubt on Hogg’s original story that he was at school on the day of the shooting” and that the impetus was on the student to “explain himself, and quickly.” But Rumpf subsequently struck the entire original story, stating in updates that video showed Hogg on the scene and blaming CBS for airing “a very confusing quote without context.” After being slammed on Twitter, Erickson deleted his tweet and has this morning been throwing a tantrum about the incident (meanwhile, Rumpf spent the night quote-tweeting people praising her response).

Rumpf’s original post cited no source for her theory, but it echoed the conspiracy theories that far-right social media accounts and websites circulated earlier that day. Larger conspiracy sites like Alex Jones’ Infowars and, yes, Gateway Pundit picked up the story later in the evening.

The right’s conspiracy theory conveyor belt famously targeted Hillary Clinton during the 2016 presidential election. Hoaxes about her health originated with wannabe sleuths on Twitter and Internet message boards, then moved to hyperpartisan Facebook-centered websites and larger right-wing blogs like Gateway Pundit that served as conspiracy clearinghouses. Finally, they entered the mainstream political debate via major conservative pundits and Fox News hosts. Now we’re seeing the same pattern play out, but this time the apparatus has fixated on high school students pushing for action to combat gun violence.

Clinton had been the target of insane conspiracy theories for decades, and there’s a certain expectation that politicians seeking election should be able to respond to any criticism, however ludicrous. But, conservatives’ arguments that the Stoneman Douglas students have entered the public debate and thus are “fair game for critics” aside, you’d think we’d all be able to agree that the kids have been through enough and shouldn’t be targeted by a swarm of trolls and hacks.

And yet, here we are. As the Stoneman Douglas activists have taken a central role in the current debate about guns, they’ve turned into the current hate object of the modern right. And so the tools and methods previously brought to bear against powerful Democratic politicians have now been turned on them.

Almost immediately after the mass shooting, posters on far-right online message boards began warning that the surviving students who were giving interviews to television reporters were actually “crisis actors.” An organized campaign by those trolls turned that hoax into the top video on YouTube’s trending page, while other far-right websites, such as The Gateway Pundit and TruthFeed, subsequently attacked the students by suggesting they were coached.

As student survivors of the shooting have spoken out about and campaigned for changes to gun laws, they have drawn increasing scrutiny from all parts of the right-wing media, including the message board conspiracy theorists and the websites that regularly draw from their musings.

Over the weekend, far-right trolls apparently created and circulated a fake image and GIF of survivor Emma González tearing up the Constitution. Meanwhile, major conservative sites like Breitbart.com and Ben Shapiro’s Daily Wire decided that they could produce good content by aggregating tweets from people who claimed that Hogg had offered a “Nazi salute” by raising a fist after his speech at Saturday’s March for Our Lives event in Washington, D.C.

The good news so far is that while Fox News played a key role in pushing the Clinton health conspiracy theories into the mainstream, its hosts and commentators don’t seem to have done the same with the Stoneman Douglas ones. Instead, the network’s conservative pundits have focused on delegitimizing the activists as young, ignorant, and overly emotional.

That keeps the conspiracy theories festering in the fever swamps but largely out of sight of the rest of the public. But as the targets of both the Internet mob attack known as Gamergate and the Sandy Hook conspiracy theorists would doubtless agree, those less-public campaigns can nonetheless do lots of damage to regular people who are just trying to go about their lives. In any case, the right-wing conspiracy network is here to stay, and it’s happy to go after anyone its members perceive as an enemy.