Right-wing and fringe media outlets and figures, including Kris Kobach, vice chairman of the Trump administration’s election integrity commission, are citing a Washington Times article about several thousand New Hampshire voters using out-of-state driver’s licenses to register to vote to bolster conservative claims of fraud and say that Republicans may have actually won the state. But journalists and election experts shot down these claims of voter fraud and explained that New Hampshire’s voter ID law permits out-of-state driver’s licenses to be used as proof of identity when voting, an option that college students often exercise.

Wash. Times used data of voters registering with out-of-state driver’s licenses in New Hampshire to promote conservative claims of voter fraud. A September 7 Washington Times article published information released by a New Hampshire Republican showing that “more than 6,500 people registered to vote in New Hampshire on Nov. 8 using out-of-state driver’s licenses” to bolster conservative claims of voter fraud. While admitting that these statistics “don’t prove those accusations,” the Times wrote that “they do corroborate them,” citing further data that more than 5,000 of those voters haven’t yet obtained a New Hampshire license or vehicle registration:

More than 6,500 people registered to vote in New Hampshire on Nov. 8 using out-of-state driver’s licenses, and since then the vast majority have neither obtained an in-state license nor registered a motor vehicle.

Conservatives say the state’s same-day registration is an invitation for fraud because of loose proof-of-residence rules.

Since Election Day, Republicans have charged that a significant number of nonresident Democrats, principally from Massachusetts, flowed into New Hampshire to vote illegally, tilting a close race to their party.

“Having worked before on a campaign in New Hampshire, I can tell you that this issue of busing voters into New Hampshire is widely known by anyone who’s worked in New Hampshire politics. It’s very real. It’s very serious. This morning, on this show, is not the venue for me to lay out all the evidence,” White House policy adviser Stephen Miller told ABC News in February.

Though Mr. Jasper’s findings don’t prove those accusations, they do corroborate them.

But more than 80 percent of voters who registered on Nov. 8 using out-of-state driver’s licenses, or 5,313 of them, neither had a state license nor registered a motor vehicle almost 10 months later. [The Washington Times, 9/7/17]

Breitbart.com’s Kris Kobach cited the data in the Wash. Times article as “proof” of “fraudulent votes” in New Hampshire and claimed Hillary Clinton and Sen. Maggie Hassan may have fraudulently won the state. Kris Kobach, Kansas’ secretary of state, vice chairman of President Donald Trump’s election integrity commission, and a paid Breitbart.com columnist, cited the Washington Times article as “proof” of voter fraud in New Hampshire in his September 7 column:

It has long been reported, anecdotally, that out-of-staters take advantage of New Hampshire’s same-day registration and head to the Granite State to cast fraudulent votes. Now there’s proof.

5,513 is a big number – more than enough to swing two very important elections. The closest major election was the contest between incumbent Republican U.S. Senator Kelly Ayotte and challenger Maggie Hassan (D). Hassan won the election by a razor-thin margin of 1,017 votes. Those 5,313 fraudulent votes were more than enough to swing the election. If 59.2 percent or more of them went for Hassan, then the election was stolen through voter fraud. That’s likely, since the surrounding states are Democrat strongholds.

It’s also possible that New Hampshire’s four electoral college votes were swung to Hillary Clinton through illegal voting by nonresidents. Clinton won New Hampshire by only 2,732 votes. If 74.8 percent of the 5,513 fraudulent votes were cast for Clinton, then the presidential election in New Hampshire was tipped as well. [Breitbart.com, 9/7/17]

FoxNews.com: “Out-of-staters may have won New Hampshire for Clinton.” A September 8 FoxNews.com article cited the Washington Times report, saying the data it included “could potentially call into question the validity of the New Hampshire results for Nov. 8, when Democratic nominee Hillary Clinton outpolled Republican nominee Donald Trump by a mere 2,736 votes.” [FoxNews.com, 9/8/17]

Gateway Pundit: “VOTE FRAUD: More Than 5,000 Out-of-State Hillary Voters May have Tipped New Hampshire Against Trump.” Right-wing fringe website Gateway Pundit cited the Washington Times story to scream “VOTE FRAUD” in the headline of a September 7 post, which claimed: “It is well known that people are bussed in to vote in New Hampshire. This is why the Democrats are fiercely working to stop any investigation into vote fraud and are working to prevent any type of voter I.D. laws. Strict laws would have tipped New Hampshire in Donald Trump’s favor.” [The Gateway Pundit, 9/7/17]

NH Senate election appears to have been stolen by @SenatorHassan with fraudulent votes. https://t.co/Qk0odHhPeU

New Hampshire voter ID law: “A driver’s license issued by any state or the federal government” will “satisfy the identification requirements” for voting. The website for New Hampshire’s secretary of state includes the text of the state’s voter ID law (accessible in PDF format), which clearly states that out-of-state driver’s licenses are acceptable forms of identification to prove a voter’s identity:

(1) A driver's license issued by any state or the federal government. [New Hampshire secretary of state website, accessed 9/8/17]

ACLU Voting Rights Project Director Dale Ho on Wash. Times article: “What a joke. Under NH law, someone who moves in from out of state (e.g. a college student) can vote w/ no duty to get a NH license.”

What a joke. Under NH law, someone who moves in from out of state (e.g. a college student) can vote w/ no duty to get a NH license. https://t.co/3dveqBoDF5

Wash. Post’s Philip Bump: Kobach’s baseless claim of voter fraud makes clear it’s inappropriate for him to serve on voter integrity commission. In a September 8 article, Washington Post national correspondent Philip Bump poked holes in Kobach’s effort to claim voter fraud in New Hampshire and concluded that he’s not qualified to serve in any capacity on a national commission on voting:

So: some 5,313 voters registered with out-of-state licenses but hadn’t then registered a car within 10 months.

And then he’s off to the races: It’s likely that the results of the Senate race are tainted! It’s possible that New Hampshire’s electoral votes went illegally to Hillary Clinton!

Or, you know, maybe they don’t have cars. Or, as pointed out by the Daily Mail’s David Martosko, once in the running to be Trump’s press secretary, maybe they are college students. Or both.

The state of New Hampshire has the personal information of these individuals to the point that they know if and when they registered cars. If the Republican legislature and governor would like to dig deeper and determine if any of those 5,000-plus people committed fraud, they certainly can. But since this claim has been made repeatedly, we already have any number of examples of people in the state saying that they’ve seen no evidence of fraud having occurred.

Kobach’s past behavior and other recent comments have suggested he’s inappropriate for his Trump-appointed role; this Breitbart essay makes that more clear. Incidentally, it was revealed recently that Kobach is compensated for his work at the conservative site. As a paid columnist, the logical leaps of that piece are questionable, much less as one of the two guys running an ostensibly objective look at if there is fraud in the system. What I’m saying is that the arguments Kobach presents about fraud in New Hampshire — and I recognize the significance of what I’m about to write — should have been too far afield even for Breitbart. They are unquestionably too flawed for someone with the authority that President Trump has bestowed upon him. [The Washington Post, 9/8/17]

Brennan Center for Justice: 2015 court ruling found some New Hampshire voters aren’t subject to driver’s license residency regulation cited by Kobach. On September 8, Brennan Center for Justice counsel Jonathan Brater specifically debunked Kobach’s argument that the thousands of voters who did not acquire New Hampshire licenses demonstrates voter fraud. Brater cited a 2015 court ruling which “decided that very question in New Hampshire, finding that you can be eligible to vote in New Hampshire but not be subject to the driver’s license residency regulation.” From Brater’s blog post:

Kobach is making hay out of the fact that of the 6,540 individuals who registered with out of state IDs, 5,313 of them had not gotten a New Hampshire driver’s license or registered a car there as of August. From this alone, he claims there is “proof” they never were “bona fide residents” of New Hampshire and voted illegally. Philip Bump has already pointed out some of the flaws in this logic, but it’s worth explaining at least three reasons the claim is completely bogus:

First of all, eligibility for voting and residency for the purpose of getting a driver’s license are not the same thing. In fact, a 2015 court ruling decided that very question in New Hampshire, finding that you can be eligible to vote in New Hampshire but not be subject to the driver’s license residency regulation. As we’ve documented in detail, it is constitutionally required that students be allowed to vote where they go to school.

When people talk about the potential for “voter fraud” in New Hampshire, they often point to the idea that the state allows people to register on Election Day and to use out-of-state licenses. But that alone doesn't mean those voters are doing anything illegal.

There are reasons why someone might legitimately register to vote with an out-of-state license – most obviously, they could have moved to the state recently or could be attending college here. 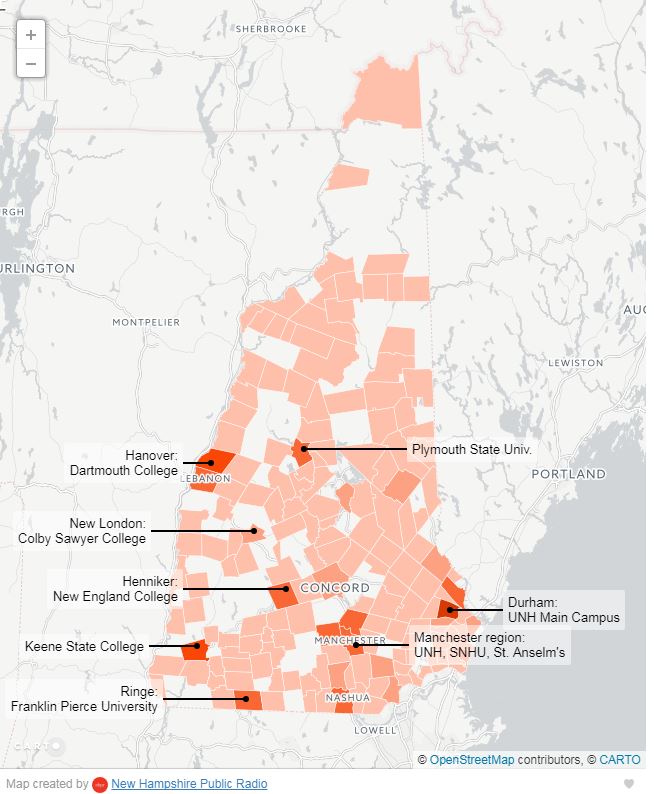 This is irresponsible, stupid journalism. Having an out of state DL isnt fraud. I have a TX DL & legally vote in NY .https://t.co/67zeWbY534

You know who else called those claims baseless? Republicans. https://t.co/ccSXK6tbBC

Next time the Washington Times accuses another media organization of wholesale making up facts, send them this story.

NH state law allows you to have an out of state drivers license and still vote in the state, which this story (surprise!) doesn't mention.

Wash. Post’s David Weigel: “Both voters and election experts say [Kobach’s] allegation -- accusing thousands of voters of criminal activity simply for living in New Hampshire but holding out-of-state driver’s licenses -- are baseless.” Washington Post reporter David Weigel was contacted by several New Hampshire voters who legally used out-of-state licenses and explained why they could vote there without later getting a New Hampshire driver’s license. His September 8 report explained that “both voters and election experts” have called Kobach's allegations of voter fraud “baseless”:

Both voters and election experts say the allegation — accusing thousands of voters of criminal activity simply for living in New Hampshire but holding out-of-state driver’s licenses — are baseless.

Kobach apparently made no attempt to contact voters who’d cast ballots but held out-of-state IDs. Thursday night, The Washington Post asked voters who’d done so to tell their stories; three did so within 60 minutes — college students, who were living in New Hampshire but did not change their licenses.

It’s possible that thousands of other New Hampshire college students voted the same way; the ability of temporary residents to swing close elections has been controversial in the state for years, as Democrats go through the same biennial battle to drive up turnout on campuses. “Apparently, Kobach is saying that voting should be limited to people who drive cars,” said David Becker, director of the Center for Election Innovation. “He’s basically saying Bill Gardner, New Hampshire’s secretary of state — his colleague — is incompetent. And he’s doing it without a basis.” [The Washington Post, 9/8/17]