Kobach is a paid columnist for the toxic right-wing website while simultaneously serving as Kansas’ secretary of state and as the vice chair of the Presidential Advisory Commission on Election Integrity -- an arrangement that has drawn criticism from ethics experts. He has frequently smeared undocumented immigrants in the media.

In his October 24 Breitbart.com piece, Kobach made false claims about the crime rate for undocumented immigrants, writing, “There is overwhelming evidence that it is much higher than the crime rate for U.S. citizens. Illegal aliens commit a disproportionate share of crimes” (emphasis in original). As The New York Times and many others have reported, “Several studies, over many years, have concluded that immigrants are less likely to commit crimes than people born in the United States. And experts say the available evidence does not support the idea that undocumented immigrants commit a disproportionate share of crime.”

Kobach linked to ConstitutionParty.com and ConservativeTruth.org for his sourcing, respectively. Both statistics are longtime claims that have been made repeatedly in chain letters and message boards.

His bullet point about the “most wanted” list has appeared virtually word-for-word in letters, comment sections, Yahoo! Answers, and message boards going back over a decade. For instance, the claim was reposted to the Free Republic message board in November 2006 and was taken from CaPoliticalNews.com, which claimed the numbers were from “INS/FBI Statistical Report on Undocumented Immigrants.”

The Los Angeles Times debunked a variation of that claim in 2009, writing that the LAPD confirmed that the statistic didn’t exist (this section was updated with additional information from the Times):

We traced this “fact” to a 2004 op-ed in The Times by Heather Mac Donald of the conservative Manhattan Institute for Policy Research. Mac Donald said “officers” told her about the warrants. She conceded that there were no such data in official reports but suggested the LAPD “top brass” was hiding the truth.

I called the LAPD's press office, which contacted the department's Fugitive Warrant Section. Officers confirmed that the statistics in item No. 2 and No. 3, which follows, don't exist.

3. “75% of people on the most wanted list in Los Angeles are illegal aliens.”

We traced this figure to something circulating on the Internet under the name “the 2006 (First Quarter) INS/FBI Statistical Report on Undocumented Immigrants.” The “report” contains similar figures for Phoenix, Albuquerque and other cities. But it isn't an actual government document. The INS ceased to exist in 2003, after the Department of Homeland Security was created.

There's something really disturbing about a work of fakery meant to tarnish an entire class of people. You wonder what kind of person would pen such a thing.

Kobach's other bullet point about burglaries has similarly appeared virtually word-for-word all over the internet for years. Kobach’s sourcing for that claim comes from ConservativeTruth.org, which claims it’s from “the Foreign National Crime Information Center.” That site posted the chain email statistics about supposed undocumented crimes. But it has the following disclaimer about those statistics: “DISREGARD THE BELOW STATISTICS, THEY ARE not current AND SEVERAL YEARS OLD.” 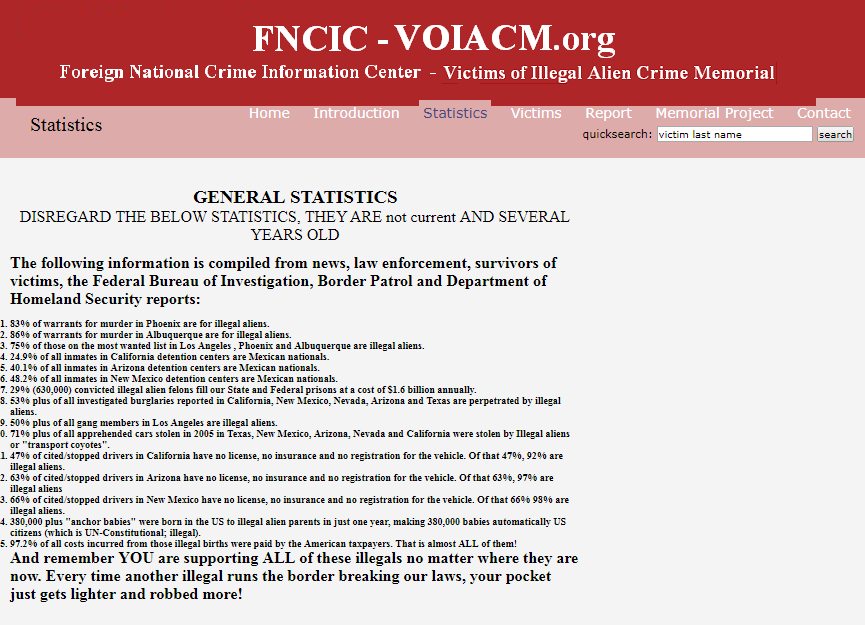 UPDATE: Kobach’s Breitbart column also cited a piece by a white nationalist who has reportedly been “part of the American Holocaust denial movement.”

Kobach’s sourcing for his claim that “75 percent of those on the most wanted criminals lists in Los Angeles, Phoenix and Albuquerque are illegal aliens” is from a piece by Peter B. Gemma for the ConstitutionParty.com.

As the Southern Poverty Law Center has documented, Gemma is a racist writer who has worked for the white supremacist Council of Conservative Citizens and has been a “part of the American Holocaust denial movement.” From the civil rights group’s 2013 profile of Gemma:

Virtually unnoticed, Gemma, who lives in Florida, has recently joined the governing national executive committee of the Constitution Party as its eighth living member (party founder Howard Phillips, who died earlier this year, is also listed). Although Gemma is described by the party website as “a veteran political and fundraising consultant” who was a staffer on three presidential campaigns, he is in fact a white nationalist with deep ties to a whole array of racist hate groups.

For years, he was the head of design, marketing and advertising for the racist tabloid of the Council of Conservative Citizens (CCC) — a group that has complained that non-white immigration was turning the U.S. population into a “slimy brown mass of glop” and described black people as a “retrograde species of humanity.” He also was the media coordinator for the CCC’s Capital Region for several years.

He is part of the American Holocaust denial movement, reviewing a book by British denier David Irving for the racist Occidental Quarterly journal, organizing a 2005 speaking event for Irving, and giving a speech at the denialist Institute for Historical Review, according to the Institute for Research on Education & Human Rights.

In 2000, Gemma appeared with David Duke and Don Black, both former leaders of the Knights of the Ku Klux Klan, at an event meant to raise money for the fascist, whites-only British National Party, according to the same report.

The Anti-Defamation League has also criticized Gemma. The group wrote of Gemma in 2013:

In its four issues published in 2013, the anti-immigrant journal The Social Contract  (TSC), published by racist John Tanton, the founder of the modern-day anti-immigrant movement, featured a number of articles penned by anti-immigrant extremists. Peter Gemma, a former editorial advisory board member of the Citizens Informer the CofCC’s publication contributed three articles to TSC. In 2004, Gemma introduced notorious Holocaust denier Mark Weber at a meeting of the Institute for Historical Review (IHR), once the leading Holocaust denial organization in the United States.