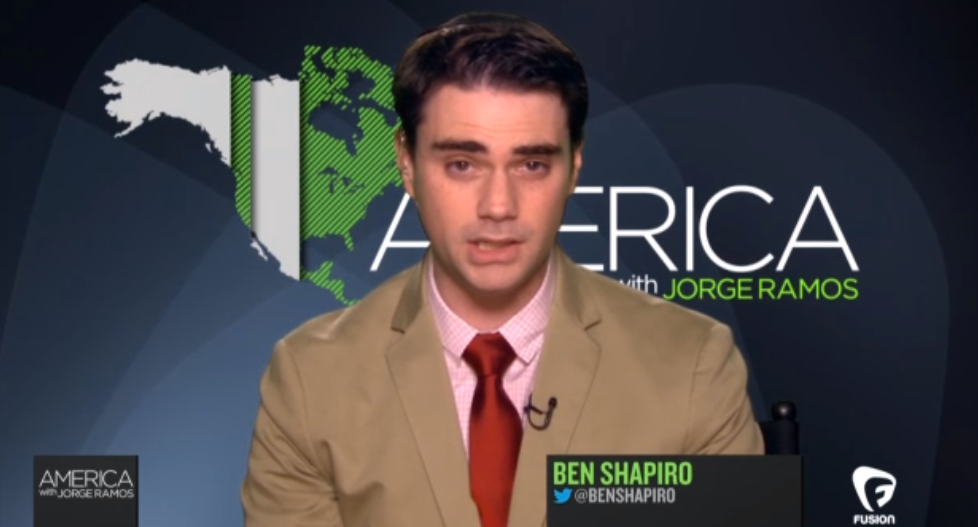 Breitbart.com editor-at-large Ben Shapiro asserted that "[t]his is not a country that discriminates against homosexuals," despite the persistence of marriage equality bans, anti-LGBT employment discrimination, and hate crimes.

In a February 10 interview with Fusion TV's Jorge Ramos, Shapiro weighed in on National Football League prospect Michael Sam's recent announcement that he's gay. Even as the rabid opponent of marriage equality, anti-discrimination protections, and efforts to end anti-LGBT bullying asserted he was “happy” for Sam, Shapiro reprised an argument he made in a Breitbart.com column depicting Sam as the useful pawn of a liberal media intent on proving America is homophobic. When Ramos pressed Shapiro on whether gays encounter discrimination in the U.S., Shapiro was unwilling to acknowledge anything more than “a vastly minute amount”:

SHAPIRO: I would say there is a vastly minute amount of discrimination against gays in this country. The FBI statistics show there are about the same number of attacks on Jews in this country as there are homosexuals. This is not a country that discriminates against Jews and homosexuals. When we do find somebody who discriminates against homosexuals, they should be called out by every person of good-hearted intent as they are in the United States 2014. This is not 1952.

Shapiro's declaration that anti-gay discrimination is a thing of the past will come as news to gay people living in the 33 states that don't allow same-sex couples to get married and the 29 states where it's perfectly legal to fire an employee simply for being gay.

And gay people continue to be one of the groups most targeted by hate-motivated violence in America. Even locales seen as bastions of acceptance aren't free of danger. Anti-LGBT hate crimes skyrocketed in New York City in 2013, prompting renewed focus on the need to combat anti-LGBT harassment and violence.