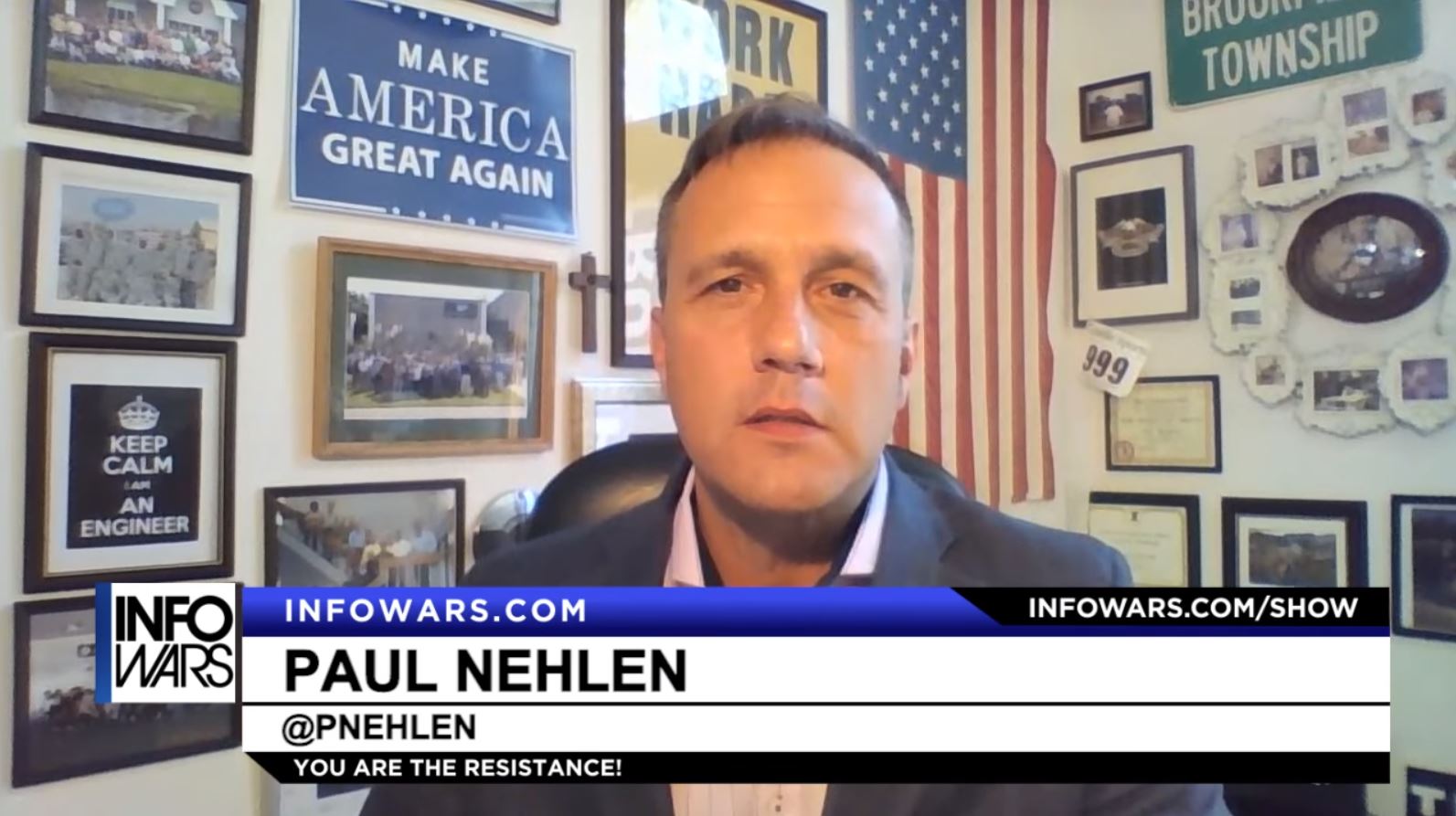 As conservative commentators scrutinize congressional candidate Paul Nehlen’s explicit anti-Semitic messages and ties to the “alt-right,” Breitbart.com, which had put its full support behind Nehlen, is appearing to disavow Nehlen’s extremism while also continuing to give him a platform.

In an attempt to advance its nationalistic war against all things establishment, Breitbart went all-in for Nehlen -- a little-known candidate who had no chance of winning -- in a 2016 primary election, launching its quixotic crusade to unseat Speaker of the House Paul Ryan (R-WI). Predictably, and despite Breitbart’s full-throated support (up until the election, the outlet published close to 30 pieces of content shilling for him), Nehlen lost to Ryan by a 85 to 15 percent margin. Not discouraged by his loss, Nehlen continued to raise his profile with a prolific social media presence and, most importantly, Breitbart’s support. Breitbart’s Executive Chairman Steve Bannon hosted him on his radio show a week after his embarrassing loss, treating him “like a hero” and literally professing his love for him.

In June, close to a year after his humiliating defeat, Nehlen announced a new bid to unseat Ryan in 2018. Breitbart continued to churn out Nehlen-related content, as well as provide him with an “exclusive” platform to author his own attacks on the speaker of the House. However, Nehlen’s penchant for bigotry on social media recently drew the condemnation of a conservative commentator when he targeted attorney Ari Cohn with an anti-Semitic message. As a result, other pundits in the MAGAsphere similarly condemned Nehlen’s anti-Semitism, with Rebel TV host John Cardillo claiming he’d “spoken to Team Bannon” and “they were shocked and disgusted”: 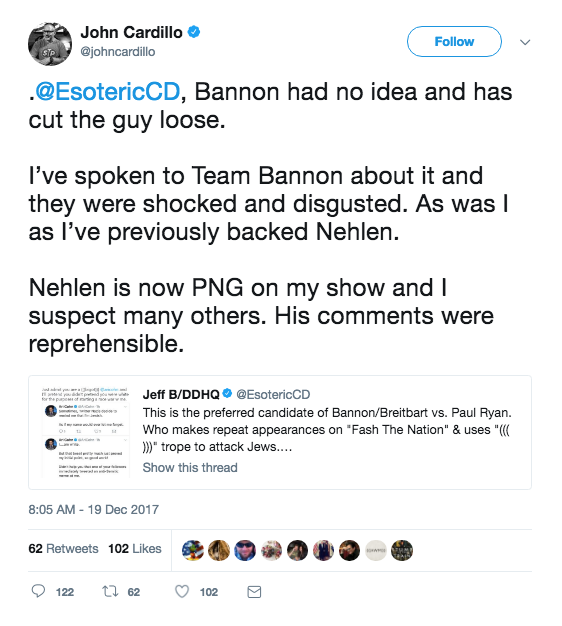 Despite the reported shock of his loyal supporter, Nehlen’s anti-Semitism was anything but sudden. His ties to white nationalism and the “alt-right” had been explicitly displayed in his digital fingerprints, as reported by HuffPost and Salon. His attacks on Cohn were not his first display of anti-Semitism, nor were they out of the ordinary given his habit of aggressively responding to his critics using compelling arguments such as “eat a bullet” or “self deport.” Nehlen had also promoted a 4chan meme with ties to the “alt-right,” as well as embraced “Groyper,” a known “alt-right” mascot. He has never shied away from being “all in on the AltRight (sic) vote.” After stumping for Roy Moore, Breitbart’s chosen (and defeated) candidate in the Alabama senatorial special election, Nehlen appeared on the “white power podcast Fash the Nation” and used an anti-Semitic expression, talking about “people who want to throw their parentheses at you,” a clear allusion to the “alt-right” echo meme. Currently, he’s responding to his critics from the right with the type of trolling that is typical of message board posters, crudely comparing outcries to “autistic screeching” (a meme often used to signal enjoyment from triggering those deemed oversensitive).

Meanwhile, the Cardillo tweet remains the only (even second-hand) evidence that Breitbart is at all bothered by the explicit extremism of their chosen candidate. And in response to the HuffPost article that compiled evidence of Nehlen’s ties to white supremacy, Breitbart editor and Team Bannon member Raheem Kassam dismissively tweeted that it was “hysterical rubbish:”

In fact, Breitbart has continued giving Nehlen a platform. As recently as December 18, Nehlen made a guest appearance on the Breitbart radio show Whatever It Takes with Curt Schilling. If what Cardillo tweeted is true, it shows that Breitbart is trying to have it both ways -- appease conservative critics with a vague reported condemnation of Nehlen’s bigotry, without issuing a full-throated disavowal that could cause them to lose the Gab “alt-right” audience. This audience loves Nehlen, proving once again what's become more than evident this year: Breitbart is OK with playing footsie with Nazis.

UPDATE: CNN reported that an adviser of Steve Bannon, Arthur Schwartz, said “Nehlen is dead to us” in response to Nehlen's increasingly offensive tweets.