In attempts to smear immigrants and paint them as ruthless criminals, Breitbart.com has repeatedly accompanied its articles with terrifying images that have nothing or absurdly little to do with the story at hand, including the news that President Donald Trump is rescinding the Deferred Action for Childhood Arrivals (DACA) program. These moronic attempts to fearmonger while sacrificing accuracy further the website’s anti-immigrant message, even though simple Google image searches reveal the reality of the original photos.

In the wake of President Donald Trump’s decision to rescind DACA -- an Obama-era policy that protected from immediate deportation hundreds of thousands of undocumented immigrants brought to the United States as children and granted them temporary work permits -- Breitbart chose to illustrate a story about DACA recipients with an image of MS-13 gang members taken in El Salvador.

Breitbart is using a Getty photo of MS-13 members in El Salvaor to talk about DACA recipients in the U.S. because it is a racist hate site pic.twitter.com/hGr5s4NyRX

While Breitbart's tweet with the misleading image was deleted after it drew broad scorn for the site (Breitbart also changed it in the story), it perfectly illustrated the outlet’s tendency to make editorial decisions that show unscrupulousness and a disregard for the truth. In this instance, the site was exploiting a gang crisis in a foreign country in order to smear hundreds of thousands of immigrants who in reality had to have vetted records to gain admission to the program. Federal specifications for DACA protections clarify that applicants could not have “been convicted of a felony, significant misdemeanor, or three or more other misdemeanors” nor could they pose “a threat to national security or public safety.”

And that’s not all.

While trying to portray a “gang” that was “moving migrants” from Morocco to Spain in late August, Breitbart used an image of German soccer star Lukas Podolski flashing a peace sign while riding a Jet Ski in Brazil. Podolski is not only widely recognized among soccer fans, but he is also neither a “migrant gang member, nor being human trafficked,” as Breitbart editors had to admit in their original story after they were mocked on social media. 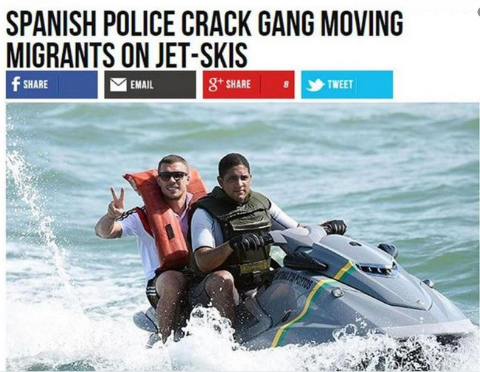 On another occasion, Breitbart illustrated a story about a Mexican cartel’s mass grave with a terrifying image from Reuters of a mass grave in Iraq. The website has also used the same image to report on a story about Russia. While Breitbart’s use of the wrong image demonstrates low journalistic standards and likely speaks to an intent to provoke fear of immigrants among its readership, it might also be indicative that the Breitbart “scary mass grave” story folder contains only a single image.

Breitbart is currently being sued for alleged copyright infringement over an image, bringing possible legal consequences to its questionable use of any old image available on the internet. At least it’s not a Nazi-era cartoon this time.