Breitbart.com has been running near-daily “articles” outfitted with videos, petition links, and press release-style language promoting the work of the business lobbying group Job Creators Network. The group, which has been paying conservative media to create “grassroots” support for tax cuts, is a front-page sponsor of the right-wing outlet and has received funding from the foundation of Breitbart.com part owner Rebekah Mercer.

The Job Creators Network (JCN) is a conservative organization co-founded by Home Depot co-founder Bernie Marcus. The Mercer Family Foundation, run by Republican megadonor and Breitbart News investor/owner Rebekah Mercer, gave JCN -- which was originally called the Job Creators Alliance -- $100,000 in both 2014 and 2013.

JCN announced on September 5 that it would launch a “multi-million dollar advocacy campaign calling for small business tax cuts now” and the group would “publicize the need for tax cuts with an in-depth TV, print, radio, and digital advertising buy. … Radio ads will play in heavy rotation on major conservative talk shows including Sean Hannity, Laura Ingraham, and Mike Gallagher.”

An advertisement for TaxCutsNow.com appeared at the top of Breitbart.com on September 12, 13, and 14, alongside a Breitbart “Action Center” logo and a message to “sign the petition” demanding “tax cuts now!” 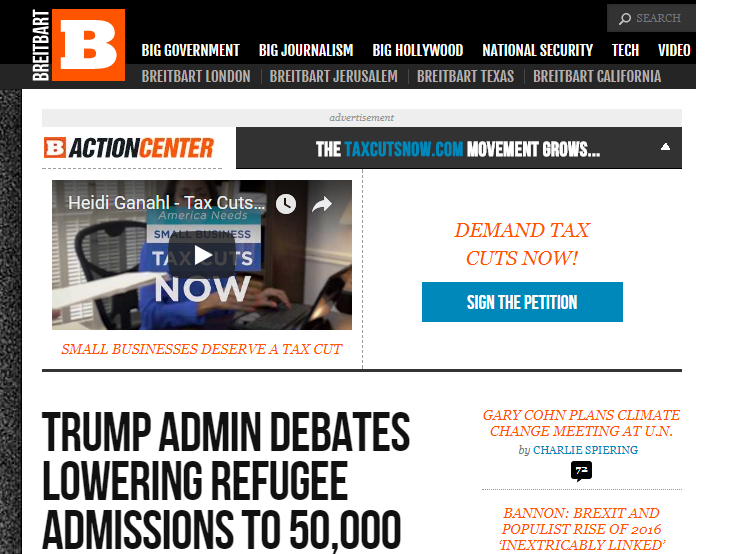 Since late August, Breitbart.com has posted nine “articles” promoting TaxCutsNow.com that read like press releases or sponsored content. None of the articles mentioned any financial ties between Breitbart and JCN, which Breitbart repeatedly described as “one of the nation’s largest pro-jobs grassroots organizations.” They’re all bylined by Breitbart.com’s Jerome Hudson, whose beat has been billed as “news as it relates to race relations, politics, and popular culture.” Hudson did not respond to a request for comment about whether JCN’s sponsorship influenced the pieces.

Those pieces largely follow the same script: a promotion of the group’s tax cut petition; an embedded video of a JCN advertisement or event; and the dates of upcoming stops of the group’s bus tour, which will conclude in Washington, D.C., on September 15 with CNN contributor Stephen Moore as the headliner.

None of the pieces contained any apparent news value; they seem to exist just to promote JCN and its TaxCutsNow campaign. The most recent Breitbart piece, for instance, repurposed a press release announcing that billionaire publisher Steve Forbes -- who has pushed for tax cuts for decades -- had endorsed the tax cut campaign.

Here are their headlines:

Breitbart’s promotion of JCN at times delves into comical language. Its September 13 piece touted JCN’s Tulsa, OK, tour stop as “a massive rally.” (Breitbart elsewhere has claimed that JCN is embarking on a “massive weeks-long national bus tour” and that it “will begin on Sunday, September 10 with a massive event in Oklahoma City, OK.”) That “massive” rally description was contradicted by Breitbart’s own piece, which embedded a video and picture of the crowd that showed only a few dozen attendees. Photos on JCN’s Facebook page also showed a small turnout, and Tulsa World reported that the rally had the attention of “several dozen interested parties.”

The pro-JCN Breitbart.com pieces also passed along misinformation. For instance, the September 12 piece quoted President Donald Trump claiming (as he often does) that the United States is the “highest-taxed nation in the world.” In fact, as The Associated Press has noted, the U.S. tax burden “is actually one of the lowest among the 32 developed and large emerging-market economies tracked by the Organization for Economic Cooperation and Development.”

JCN has used Breitbart’s support to exaggerate grass-roots backing for its campaign. During the Tulsa rally, CEO Alfredo Ortiz appeared to reference the group’s paid advertising on Breitbart and said that “Breitbart actually just took [JCN’s petition] and posted it right on the front page, including a nice video. … The message is being heard.” Ortiz did not respond to a request for comment.

The Standing Committee of Correspondents of the Senate Press Gallery in April rejected Breitbart’s application for permanent congressional credentials, citing concerns over the Mercer family’s ties to the site and potential conflicts of interest. As Media Matters has documented, the site’s top editors “have used the site to promote nonprofit organizations, for-profit companies, and personal clients who in turn pay them hefty salaries. ”

JCN is one of the few groups that actually wants to associate its brand with Breitbart.com, which is notorious for posting toxic content. Since November, the activist group Sleeping Giants has been successfully persuading advertisers to disassociate themselves from Breitbart. In June, ads for the site had reportedly shrunk by “nearly 90 percent” in just three months.

We need to let Congress know that we need Tax Cuts Now! Take action at https://t.co/9ENwfvYeCY to make a difference. pic.twitter.com/O22Cev2QoS

Tired of D.C. politicians taking too much of your hard-earned income?

Big tax cut rally happening on the steps of the IRS Building this Friday thanks to @JobCreatorsUSA.

Media Matters asked Luntz whether he or his firm Luntz Global are working for JCN; the Republican consultant did not directly answer that question, instead stating in part that “more than half of America live paycheck to paycheck - and no one knows this more than a small business owner.” He added, “I strongly support what JCN is trying to achieve.” Luntz has participated in JCN events in prior years. Here is Luntz's email response about his relationship with JCN:

Sean Hannity, on the other hand, promoted the website in two tweets while noting that the post was an “#ad”:

#AD Liberal elites are standing in the way of real tax cuts YOU voted for! Tell the swamp we mean business. https://t.co/hmXdsMBk2D pic.twitter.com/XSmNcsqFCC

#ad American workers voted for tax cuts last fall, but “the swamp” still doesn't get it. Send a message to Congress! https://t.co/hmXdsMBk2D pic.twitter.com/ZfDmwzEBxZ

Media Matters previously documented JCN’s efforts to recruit conservative radio hosts to do live-read ads for the website StopIgnoringMyVoice.com, which has a list of upcoming town halls by legislators and encourages conservatives “to show up at town halls and to have your voice heard.”