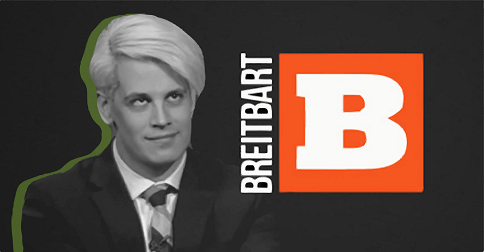 Breitbart.com Editor-in-Chief Alex Marlow is laying the groundwork to blame editor Milo Yiannopoulos’ critics following the emergence of a video in which Yiannopoulos apparently justified sexual abuse of a minor by an adult. According to Marlow, there are “millions of examples of the left normalizing behavior similar to what Milo describes,” and Yiannopoulos is the victim of a “coordinated hit” by liberals and anti-Trump conservatives.

The Conservative Political Action Conference rescinded Yiannopoulos’ speaking invitation and Simon & Schuster canceled the publication of his book after video circulated of Yiannopoulos “condoning pedophilia.” Yiannopoulos’ long and well-known history of making virulent attacks against women, people of color, Muslims, and the transgender community, and his role as a key enabler of the “alt-right,” were not sufficient to stop him from receiving that invitation and book contract in the first place

In an appearance this morning on the Breitbart News Daily show on SiriusXM, Marlow called the comments in the video “very troubling and upsetting” and “not defensible” and said Yiannopoulos would address “his future with Breitbart” during a press conference this afternoon. “You will get some answers today, just not right this second,” he promised his audience.

Marlow described the video as “a total surprise to people in the Breitbart organization” and repeatedly condemned the comments, but also offered what he termed important “context” for Yiannopoulos’ remarks. This included assuring the Breitbart audience that Yiannopoulos says he himself has not sexually abused minors.

Marlow, whose website supported Donald Trump during the presidential campaign even after audio emerged of him bragging about sexually assaulting women, then attacked liberals for “normalizing behavior similar to what Milo describes”:

We have many examples on the left who have admitted to statutory rape. We have Lena Dunham had in her book talking about touching her sister’s private parts as a child. We have Roman Polanski, I mean, there are millions of examples of the left normalizing behavior similar to what Milo describes. There is no evidence that Milo has actually been a predator, and so I do think that that is also very important context.

He went on to suggest that the real villains are the people who released audio of his employee apparently defending the sexual assault of minors, saying, “It does look like the forces of the left and some of the Republican establishment and of the sort of Never Trump movement, perhaps, seems to be growing evidence that this was all coordinated to wait for a peak moment when Milo was red-hot.” He added, “They sat on the story and they held it for maximum political damage, which is really sort of sickening, that they would keep this from the public if they had it, and instead try to wait until they could do the most damage to his career, and to Breitbart, and by proxy, people like Trump and [Stephen] Bannon.”

It’s hard to parse Marlow’s comments. It is possible Yiannopoulos will use his press conference to resign from Breitbart. That would suggest that the website, amid a major advertiser boycott, has finally found a limit to the bad press it is willing to tolerate from one of its biggest stars.

No matter what, Marlow wants to keep Yiannopoulos’ audience from leaving the website. Keeping Yiannopoulos is the best way to do that, but if that’s no longer financially viable, turning him into a martyr is the next best strategy.