In a speech from the White House Rose Garden on Monday, June 1, President Donald Trump told the world it was time for law enforcement -- and, if necessary, the military -- to “dominate” America’s streets amid growing protests against police brutality and the killing of unarmed Black people. As if to punctuate Trump’s calls for a crackdown, Attorney General Bill Barr then ordered an alphabet soup of law enforcement agencies and military units to disperse a crowd of press and protesters gathered outside the White House at Lafayette Square with tear gas, flash-bang grenades and rubber bullets -- all for a photo-op with the president holding a Bible at a church across the street.

Unsurprisingly, many of Trump’s enablers in right-wing media were pleased with his violent response in Washington, D.C., and the resulting photo-op. In the days before that fiasco, Trump had lashed out in anger at the protesters while ignoring the issues of police brutality and racism triggering the protests that have now erupted in all 50 states. But now he was declaring war on “rioters” and a dubious new enemy: “antifa,” shorthand for antifascist activists.

So far, governors have refused Trump’s overtures to bring in active duty military personnel. But right-wing media -- and even some mainstream outlets -- are laying the groundwork for more state-sanctioned violence. Beyond praising the president, they are making the case for brutal crackdowns on demonstrators by justifying the use of tear gas and rubber bullets at Lafayette Square, calling for military intervention in U.S. cities, and justifying state-sanctioned violence by blurring the lines between peaceful protesters and those responsible for property damage and violence.

Here are examples of how right-wing media figures are making the case for a violent crackdown on the current nationwide protests from the week of June 1:

Arguing that the protesters at Lafayette Square got what they deserved

In a number of instances, right-wing media personalities equivocated about whether Trump and Barr’s decision to violently clear protesters from Lafayette Square was called for, or implied that tear-gassing and shooting rubber bullets at the crowd was not a big deal.

There is a massive media disinformation campaign to cover up the leftist violence and lawlessness outside the White House yesterday. @realDonaldTrump

“Send in the troops”: Justifying or calling for the use of overwhelming force

In the wake of police violence against the protesters and press, on June 3, The New York Times published an op-ed by Sen. Tom Cotton (R-AR) advocating sending active military troops into American cities to put down protests with “an overwhelming show of force.” The Times quickly received criticism for the piece, including from its own staff.

In a prelude to the Times op-ed, Cotton had tweeted that not only should the troops be sent to the cities, but they should offer “no quarter for insurrectionists, anarchists, rioters, and looters.” (In military terminology, “no quarter” is an order to kill the enemy rather than accept their surrender -- a practice forbidden by both American and international law.)

While Cotton may have been alone in the halls of Congress in explicitly calling for war crimes against civilians, some of his colleagues echoed similarly belligerent sentiments:

And, if necessary, the 10th Mountain, 82nd Airborne, 1st Cav, 3rd Infantry—whatever it takes to restore order. No quarter for insurrectionists, anarchists, rioters, and looters. https://t.co/OnNJmnDrYM

After Trump’s photo-op stunt and talk of domination, it didn’t take long for right-wing outlets to start posting glowing articles about the Trump administration and for conservative talking heads on cable news to burnish military intervention as a new talking point.

Justifying violence against “antifa” and “looters,” or alleging that protesters pose a broader threat

Incidents of violence against protesters and press far outnumber those against the police and business owners. Right-wing media, unsurprisingly, have homed in on the latter while ignoring the former, blurring the lines for its audience between peaceful protests and haphazard incidences of property damage and violence. 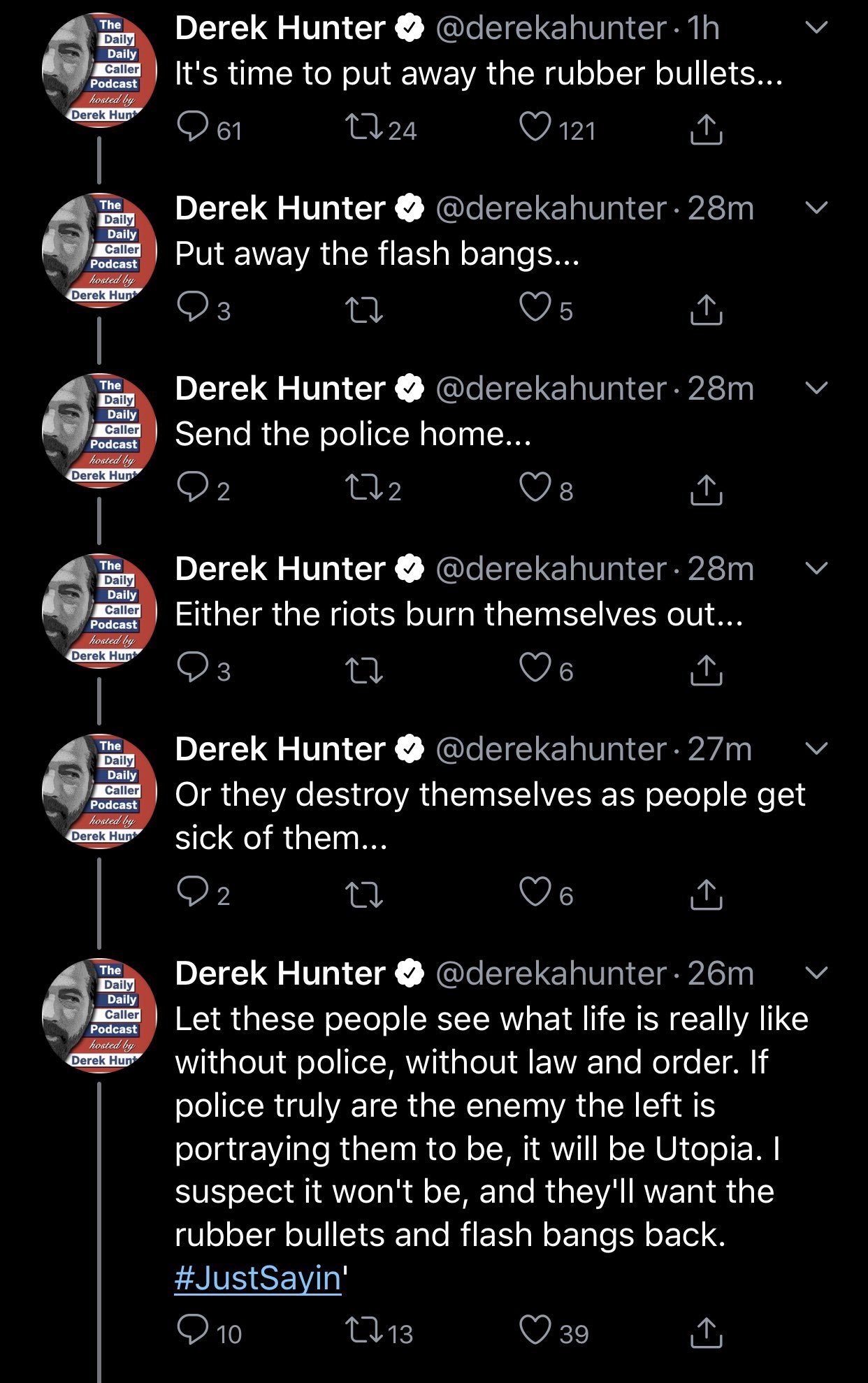