Early this morning a famously thick-witted right-wing troll authored an inflammatory and ignorant tweet arguing that Sen. Kamala Harris (D-CA) is not a natural-born citizen and is thus ineligible to run for the presidency. Harris was born in Oakland in 1961, which means she’s been a citizen since birth, which means she’s a natural-born citizen of the United States as defined by legal and historical precedent, which means she doesn’t have to call off her just-announced candidacy for president. There is no credible argument to the contrary, and there is no evidence to the contrary -- there’s just a deceitful tweet from a known fraudster.

But the accusation was provocative enough for CNN anchor Chris Cuomo to (in a since-deleted tweet) exhort both parties of this nonexistent argument -- the idiot troll and the California senator -- to get all the facts out there and resolve the issue: 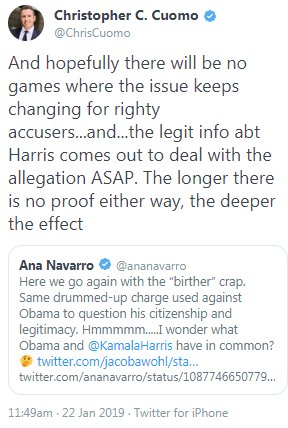 “The longer there is no proof either way, the deeper the effect.” There is proof! Harris was born in California. She’s a citizen. That’s the proof. The way a nonsense allegation like this builds “effect” is if it’s treated with any degree of seriousness by the press.

After the prolonged and ridiculous farce that was the Obama birther movement, only the most credulous and determinedly obtuse media figures would see the same exact allegations inflicted on another politician of color and extend any presumption of good faith to the malicious cretins behind it. Cuomo has done exactly that, and he went a step further by nudging Harris to lay out her “proof” to the contrary, wrongly suggesting that there’s anything that needs disproving.

Cuomo’s tweet got slammed by Twitter users, so he backpedaled and angrily insisted that he was only demanding that Harris’ accusers back up their allegation. Even if you were to grant Cuomo this explanation, he still presumed that there could be anything more to this story than a famously disreputable troll hurling racist nonsense at a Democratic presidential candidate. After absorbing enough criticism, Cuomo deleted the tweet, explaining: “The tweet was meant to put onus on accuser. Not Harris. That is the lesson of birtherism.”

That is not the lesson of birtherism. The Obama-era birthers never came anywhere close to proving their accusation, and it didn’t matter one bit. The only thing they cared about was getting people to treat their obvious bullshit with a modicum of seriousness. The country’s most famous birther was challenged repeatedly to back up his outlandish allegations about President Barack Obama; he never did, but flogging the racist conspiracy theory made him a hero to the political movement that eventually elected him president.

The larger problem here is that there are influential figures in the press who bafflingly, incomprehensibly still don’t understand that there is a right-wing propaganda machine that exists solely to extrude disinformation in the hope that it will filter up through the media. Cuomo likely believes his treatment of this new-wave birtherism is high-minded and fair; it never occurs to him that he’s giving the trolls exactly what they want.